This story of how an Indian entrepreneur painstakingly built a microfinance institution is both genuine and inspiring.
By V. Vaidyanathan | Print Edition: November 20, 2016 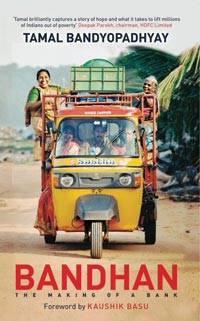 Bandhan: The Making of a Bank By Tamal Bandyopadhyay PAGES: 304 PRICE: Rs 499 Penguin Random House
In Bandhan: The Making Of a Bank, Tamal Bandyopadhyay brings alive one of the finest stories of Indian entrepreneurship, and one that Chandra Shekhar Ghosh has come to represent. Ghosh is central to the story, as he should be. The book beautifully traces Ghosh's life - when he was the head of operations for Village Welfare Society at a salary of Rs 5,000 per month, to launching his own MFI, opening the first four-by-six-foot cubicle office, to discovering the business model, getting SIDBI and ASA on board, rejecting takeover from ASA, acquiring an NBFC, scaling up, embracing computerisation, and finally instituting a universal bank.

The key takeaway is that however well-meaning, the NGO structure of doing good by availing donations and giving grants has its limitations, and the eventual sustainable model is a "for profit" organisation that attracts domestic and international capital. Along the way, I couldn't help ponder how a socialist West Bengal, originally the founding point for so many financial institutions and a hub for flourishing enterprises, managed to destroy entrepreneurship over 100 years, plunged its people into poverty, and, with an IFI (Index of Financial Inclusion) of 0.1 in most districts, has among the lowest ranks in financial inclusion in the country ironically with good intentions for the poor.

"Even if there are 100 other banks, there is enough space for all"

The book throws light on Ghosh's managerial style which, at first reading, may sound autocratic and micromanaging. The book reveals, "At DN 32, CCTVs were installed, apparently to detect theft, but that was an excuse. He wanted to keep a close watch on people. Through CCTVs, Ghosh would watch everybody - how much time they spent gossiping and doing things other than work." But when seen in perspective that the buck stops with the founder, you will get to appreciate why founders get involved in all things micro, like deciding holidays, leave, marriage policy, dress code and even deciding the specifications of the chair and table. The book also traces the challenges of funding, instances of frauds, thefts, last-mile issues, attrition, and difficulty of record-keeping at MFIs in poorly connected villages. It also talks about keeping trade unions at bay, by policies including isolating and transferring the trouble makers, aided by the fact that Bandhan had changed the employees' lives. It is also a great example of how financial ownership is different from emotional ownership. Ghosh owns less than 2 per cent of Bandhan today, but is 100 per cent emotionally invested.

Stories of successful people suffer from 'survivorship bias'. Bandyopadhyay balances the perspective by covering stories of Vijay Mahajan, of the failed MFI Basix, the travails at SKS and at other troubled MFIs, so the reader doesn't end up believing that fairytale endings are the norm of entrepreneurship.

This book is not addressed to those accustomed to being impressed about all things Western - stories of entrepreneurs like Bill Gates and Steve Jobs scripted by western authors. It's an earthy book for earthy people who can appreciate entrepreneurship at its finest, and for those who can find inspiration in the efforts of an extraordinarily driven person who flourished despite his circumstances.

The reviewer is Founder & Chairman of Capital First

In one and a half decades, Chandra Shekhar Ghosh, the founder of Bandhan Bank, scaled up the Kolkata-based microfinance institution to great heights. Now, armed with a full-scale banking licence, Ghosh is expanding the bank's asset portfolio. In an interview with BT's Anand Adhikari, Ghosh discusses the bank's progress since October last year when it started operations.

On completing a year as a banking entity

We have spread out across 30 states with 2,000-plus branches and nine million customers. We have Rs 16,000 crore worth of deposits as against Rs 16,500 crore of loan and advances. There are also 22,000 employees on our rolls today.

Our CASA is now at 15.5 per cent. Our liabilities will be a mix of current and savings account and fixed deposits. As a new bank, we should not depend on only CASA. There are customers who are putting their money for fixed deposit also; we cannot say no to them. In our banking journey, CASA will increase day by day. In the beginning, new customers do not transact more. In the first year, a small amount came from existing customers, which was part of our microfinance institution. They are not big depositors - their deposit amount ranges from Rs 10 to Rs 1,000 per customer. That constitutes less than 10 per cent of my deposits.

On its rural focused strategy

We always maintain the ratio of 30:70 between urban and rural, which is also our population ratio. Bandhan Bank is very different from existing private sector banks. We are 70 per cent in rural India from the beginning. We have some 14,000 micro teller machines. Our people go to the villages every day, collect EMIs and savings from people right at their doorstep. The information or the transaction is immediately sent to our core banking system. Customers are happy as they get the opportunity at the village level to deposit as well as withdraw their money. These machines are everywhere, both in urban and rural India.

On reduction in interest rate for borrowers

As a micro credit organisation, my total book of credit depended only on bank loan. We borrowed from banks at 11-12 per cent. Now if I give some 6 per cent to depositors, my cost of the fund also gets reduced. So, I would like to give some benefits to my depositors and borrowers. We have reduced our interest rate from 22.4 per cent as a microfinance institution to 19.9 per cent now as a bank. Our interest rates will come down gradually. The cost of operation plays a role here, which is higher in our case because of our focus on micro borrowers. Customers don't need to pay any travel cost. We are paying travel cost on behalf of them. In that sense, our costs are higher. The average loan size of large banks is around Rs 10 lakh, whereas the average loan size for us is Rs 20,000...lower the average loan size, higher the cost for banks.

On the lack of credit information in rural markets

On collateral from earlier micro borrowers

Till now, we have not insisted on collateral. In cases where the loan was more than a lakh, we have asked for some collateral. But it is not compulsory. Credits depend broadly on three things. First we look at their credit behaviour based on the data we have. Secondly, we look at business opportunity in the segment they operate in and thirdly, the assets they possess (house, for example). The loan depends totally on the cash flow, and because we know their background and business, we provide loans accordingly.

On foray into the SME segment

The future growth of the industry will come from MSMEs. They have the potential to create new employment opportunities for people. We are going on the path of simplifying the loan process. If the process is more complex, they will not come to the bank. This is my learning as a micro lender. They are ready to pay more interest rate, but want less paperwork and very quick processing. A complex process won't work even if the interest rate is low. There are broadly two sectors - manufacturing and trading. There is also agriculture, though not in the MSME segment, which is a big opportunity for India.

It's not that I cannot lend to the corporates. I am first trying to get access to small corporates and then go to the medium corporates. I'm not sure which year we would like to go to the big corporates.

On competition from small finance banks

The banking sector hasn't covered even 50 per cent of the 1.3 billion population. Even if there are 100 other banks, there is enough space for all. Banks are also conscious of competition, building staff strength and capacity to serve people. Ultimately, the customer will get more benefits. Similarly, the price competition will also benefit them. If some areas get saturated, bankers will slowly move to untapped geographies, which would result in more financial inclusion. Bandhan has the advantage of being a full-scale bank as compared to small finance banks. Out of the 10 small finance banks, eight are from MFIs. I know them and they know us. We are growing together in the same market, knowing each other's capacity. That is the advantage for us.