A harvest of ideas

A new generation of start-ups has developed a host of agricultural tech products such as livestock disease diagnostic kits and compact cotton spinning machines to make farming easier, safer and more efficient.

It's every livestock farmer's worst nightmare: losing animals to disease. But Indian farmers can sleep easy now: Kochi-based ubio Biotechnology Systems has launched an affordable diagnostic kit that allows them to detect fatal diseases such as foot-and-mouth at an early stage so the animals can be treated before it's too late.  It sells these kits at one-tenth the price of imported kits: its products cost Rs 45 to Rs 150 while imported kits are for around Rs 250 to Rs 500. "Use of diagnostic kits for animals is rare in India because most kits are imported and hence too costly for Indian farmers to afford," says V.I. Bishor, Director of ubio.

Bishor has not had it easy. The former Project Head at South Korean company Standard Diagnostics teamed up with Faisal Siyavudeen, a mechanical engineer by training, in 2008 to bring animal diagnostics technology to India. But research and development was expensive and banks refused to lend any money. He finally managed to garner Rs 1.8 crore from some angel investors and was mentored at the Biotechnology Incubation Centre at Kochi. He began with diagnostic kits for diseases in cats and dogs such as rabies, distemper and lyme. Today, the team has developed kits for a range of 35 common livestock diseases from foot-and-mouth, which causes high fever and blisters in cloven-hoofed animals, to Brucellosis, which is primarily a reproductive disease. "These are critical diseases and need to be detected very early. As these animals contribute to the food chain, they can easily be transmitted to humans," says Siyavudeen.

The market for diagnostic kits is huge, but distribution is a challenge. So far, the start-up has sold over 100,000 kits. It has also tied up with Ahmedabad-based animal vaccine manufacturer Hester Biosciences to boost its manufacturing and marketing capability. "You cannot just walk in and sell. Farmers have to be educated about the product," says Bishor. The start-up wants to focus more on research and development with the Indian Council of Agricultural Research and the Indian Veterinary Research Institute, and expand to human diagnostics as well.

Mayil Vaganan, a former scientist at Ranbaxy, is on a mission to control the use of pesticides and insecticides by Indian farmers. He and former colleague, Lokesh Makam, pooled in their savings to set up Barrix Agro Sciences in 2011 to manufacture pheromone-based traps as an alternative to pesticides. Pheromones are natural chemicals secreted by female insects to attract male insects, and have been used globally for a long time. But they have never been popular with Indian farmers because the pheromones available at chemical shops in villages are of poor quality and degenerate quickly when exposed to sunlight. While the average life of pheromones is less than a week, the patented formulation developed by Barrix lasts 60 days - from fruiting to harvest season.

The patented fruit and vegetable traps developed by Barrix block ultra-violet rays and kill 280 species of fruit flies which attack a variety of fruit, including mangoes, apples and guavas. The vegetable fly trap is also capable of destroying 50 major species of vegetable flies.  Two such traps are effective for an acre of land and cost about Rs 360. "There is huge scope for growth in the pheromone market in India, which is a massive market globally," says Mark Kahn, Founder, Partner at Omnivore Partners, a Godrej Agrovet-backed firm which invested in Barrix this year.

However, there are challenges ahead. Distribution of pheromone-based products is the biggest one because of strong lobbying by pesticide companies. "Distributors enjoy commissions from pesticide companies for recommending and selling pesticides to farmers," says Vaganan. "Dealers are even threatened not to sell pheromones."

The start-up is trying to reach out to farmers through organisations such as farm products specialist Villgro Stores in Tamil Nadu and rural management services company eKutir in Odisha. It is also developing formulations to protect other important crops like coffee, tea and coconut. "Dealers will keep pheromones only when farmers are aware of the product and ask for it," says Vaganan, who has sold traps worth Rs 60 lakh across 15 districts in Andhra Pradesh.

What do Fabindia and Good Earth have in common with fashion designers Sabyasachi Mukherjee, Wendell Rodricks and Peter D'Ascoli? They all have the same supplier of cotton fabric: the Malkha Marketing Trust, which sells special fabric produced by yarn spun with innovative small spinning machines. The Malkha fabric, which derives its name from Malmal and khadi, is light and airy because of the special quality of yarn spun by the microspinning machines developed by mechanical engineer Kannan Lakshminarayan. "The Malkha fabric is sophisticated and has a rich texture. It has an intimate luxury that does not shout or scream," says Mukherjee. 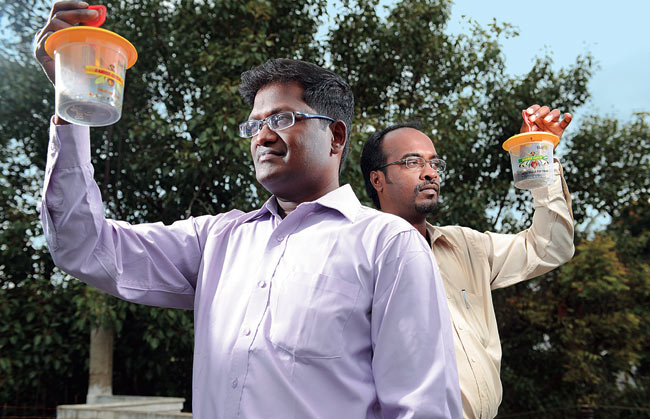 Mayil Vaganan (left), Chief Technology Officer, Barrix, and Lokesh Makam, CEO, with pheromone-based fly traps in BangalorePhoto: Nilotpal Baruah
Lakshminarayan founded Microspin Machine Works in 2011 and has now filed for a patent for the microspinning machines which could change the lives of thousands of cotton growers. The machines are one-hundredth the size of spinning machines used in large mills and can easily be set up close to a cotton farm. They produce superior quality yarn because they skip the baling process which involves compressing of raw cotton into hard blocks for easy transportation. "If cotton is growing in my backyard, why do I need to bale it," says Lakshminarayan. "We have to actively participate in the installation and financing of these machines that cost about Rs 60 lakh to the farmer."

Malkha began with five production centres in Andhra Pradesh, but has since expanded to other parts of the country through farmers' cooperatives. "We are producing export quality yarn," says Sukesh Zanwar, Managing Director of Buldana Urban Cooperative Credit Society in Maharashtra. The cooperative society is the largest of its kind in India with 270 branches across three states and 500,000 farmers on board, about half of them cotton growers. "The beauty of these small machines is that six to eight farmers can come together to set up a spinning unit, helping them become more self-sufficient and create new non-farm jobs," says Zanwar.
TweetYoutube
Tags: Start-ups | Agricultural products | Ubio | livestock | Barrix | Microspin

AirAsia aims to be a people's airline in India