Mukesh Ambani’s ambitious retail rollout has a long way to go, with just Rs 1,000 crore of the Rs 25,000 crore earmarked for the project being utilised in the past two years. The economic slowdown has set Reliance Retail back—by at least 18 months—but the good news is that it seems to be getting its strategy right at the mass end. Mukesh Ambani and Kishore Biyani almost became partners in retail a few years ago. Talks between the two stalwarts did not progress, or the retail landscape in India would have been a lot different. While Biyani’s Pantaloon wanted Reliance to be a financial investor, Ambani was looking for a more active play. In fact, Reliance Retail had even looked at Subhiksha at its peak.

But with this opportunity for collaboration between top players gone abegging, Reliance Retail had a more prosaic start. After Reliance Infocomm went to brother Anil Ambani, Reliance Industries Chairman Mukesh Ambani handed over the retail project to his trusted lieutenant, Manoj Modi, who had handled Infocomm before. They drew up a $5-billion national rollout plan, befitting a leviathan like Reliance. But it first ran into political storms in some states and then came the economic doldrums. Today, the Reliance Retail team is re-jigging its plan as it factors in an expected economic slowdown of 18 months.

As the year began, there was talk that Reliance Retail had shut scores of stores and sacked thousands. Reliance is quick to deny the scale—just 20 stores being closed and only 500-600 people shed, it says—even as it admitted to a mid-course correction.

Raghu Pillai
Course Correction
So, how is Reliance making use of the downturn? First, the talk of store closures is helping it spook landlords into negotiating lower rentals, as most stores approach the 18-month lock-in period of their three-year contracts. Then, the company is “right-sizing” its retail formats—mostly shrinking, sometimes expanding—to save money on rentals and development costs. When Reliance Retail was launched, each hypermarket was to have occupied 1.6 lakh sq. ft. Now, this format has been shrunk to 50,000-80,000 sq. ft. The change has been effected at Ahmedabad, where the hypermart is now 80,000 sq. ft, instead of the planned 1.65 lakh sq. ft.

With a development cost of Rs 2,000 per sq. ft, the company is estimated to have saved around Rs 190 crore by scaling down its hypermarkets in the last nine months. Reliance Timeout, a book and music speciality store planned with 25,000 sq. ft, has come down to 12,000 sq. ft. So have many other formats, but Reliance says some of them have been actually expanded, based on customer research. Thus, Reliance Fresh, the neighbourhood store chain promising fresh fruits and vegetables, which was launched with a 2,500 sq. ft template, has become bigger, based on customer feedback.

Rightsizing has spread to inventories. Reliance has told all managers to ensure that inventories are turned around every month, and that the value of the inventory should not be more than 1/12th of the total annual revenues.

Against its plan to acquire land for 65 distribution centres, it has stopped at 30. Says Pillai: “We feel that the current macro-economic scenario should ease in around 12-18 months. We will continue to expand, but in a steady and cautious manner. We are still aiming at our original goals, albeit with a possible delay.…” It had planned to invest Rs 25,000 crore over five years. So far, only Rs 1,000 crore has been sunk in—it’s still just the beginning. Click here to Enlarge
Is Money a Worry?
Reliance Retail has no worries on the cash front. Although parent Reliance Industries saw sales drop in the third quarter, it continues to rake in huge profits each quarter (latest net after tax: Rs 3,501 crore). Nor is it in a hurry to get foreign direct investment (FDI) in multibrand retail. The company has a slew of 50:50 ventures for singlebrand retail and does not want to give a stake of over half to FDI.

All the same, Reliance is tracking the government thinking on FDI. It has two officials in the Rajya Sabha—Parimal Nathwani, Group President for Corporate Affairs at Reliance Industries, and Y.P. Trivedi, Non-executive Director—who are also in the Standing Committee for the Union Ministry of Commerce and the Sub-committee on Industrial Policy and Promotion that relates to FDI. But the FDI scene has dampened considerably. Says KPMG’s Executive Director, Narayan Ramaswamy: “Today, more than the impediment of regulation, the quantity of FDI willing to come is becoming thinner.”

Sanjay Sakhuja, CEO-designate of Ambit Corporate Finance, an investment bank, says: “The easy availability of capital and funds had fuelled the retail boom in India. But now, with both of them falling away, companies that are not adequately capitalised will face trouble.” Reliance Retail still wants to go public before it spends all the Rs 25,000 crore the parent has allocated to it. “We will continue to de-risk our business model during this downturn. It is too early in our lifecycle to go public,” says Pillai.

Kishore Biyani
Competition Speak
Retail players nationally are taking stock of the downturn. With some, like Subhiksha, the effect has been shattering. Others claim they are unaffected. The doyen of Indian retail, Kishore Biyani of Pantaloon Retail, told BT: “I am happy to talk to you because I have no bad news to share. Demand is still growing in the value segment. In segments like home or electronics, we are seeing an almost stagnant or 2-3 per cent growth. Credit is still available to us, but interest rates are hurting.” He says that there have been no layoffs. Samar Shekhawat, VP (Marketing), Spencer’s, the RP Goenka retail chain that had also been on a frenetic expansion spree, says: “Yes, we have shut down 55 stores. But we are opening new ones, too. We plan to open 25 large stores and around 50 neighbourhood stores.” 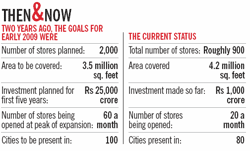 So, is Reliance on the lookout for acquisitions? It is—but does not seem too keen. “Why acquire when we can very easily expand on our own?” Pillai asks. “The current slowdown has made the internal expansion option even more viable, especially with reducing costs and increased availability for store locations.” Indications are that a lot of retail companies globally are talking to Reliance for a possible buyout— but right now the appetite for adventurous inorganic growth is lacking at its headquarters in Mumbai. The message from Manoj Modi’s office is surely one of caution— to seek efficiencies during the lull and emerge stronger at the beginning of the next boom.

Reliance Retail officials deny many of the rumours circulating in the market.