Job offers from blue-chip companies are on the rise, so are salaries; and this year, joining bonuses have grown in popularity adding to the array of sops imaginative companies are offering to lap up the best talent.

These trends are highlighted in the 2012 edition of Business Today's annual exercise: listing India's top recruiters. The top five among the companies that made offers to students at 18 B-schools and nine engineering colleges were considered.

Infosys Technologies and Cognizant emerged as the leading hirers, respectively, in the two streams. These winners stand tall amid a total of 3,779 job offers made so far at the institutes BT considered.

MUST SEE:Best Companies to Work For in India

This is in keeping with the broad trend of a strong re-emergence of information technology and business process outsourcing (BPO) majors on campus.

Consulting firms such as Deloitte and Boston Consulting Group, too, continued to be popular, along with the traditional favourites - fast moving consumer goods companies such as ITC and Procter & Gamble. 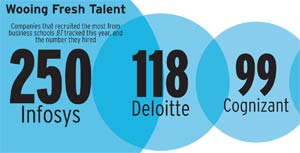 Click here to Enlarge
Cognizant made a whopping 1,631 hires at the engineering colleges we tracked, and another 99 from the B-schools. The actual number for the company would be higher since we tracked only a limited number of institutes.

The same goes for Infosys. "Our hiring is determined by business requirements and this year we made around 1,300 offers at B-schools," says Nandita Gurjar, Senior Vice President and Group Head of Human Resources.

The findings of our survey are only indicative, to be sure. Many campuses are yet to complete their placements. When this magazine issue went to press, hiring is still open at places like the Great Lakes Institute of Management, Chennai, the Shailesh J. Mehta School of Management at IIT Bombay and the Department of Management Studies, IIT Delhi. These institutes have shared their interim reports with BT. So too, did several other institutes.

The average annual compensation offered in B-school campuses this year ranged from Rs 8 lakh to Rs 13 lakh. Of course, the average offers at the top three IIMs - Bangalore, Ahmedabad and Calcutta - were slightly higher, at around Rs 18 lakh, according to industry observers. The institutes concerned do not disclose salary details. The highest domestic offers varied between Rs 14 lakh and Rs 18 lakh.

Another survey of close to 200 companies, carried out by Aon Hewitt at the onset of the hiring season, revealed that the median pay for MBA graduates in 2012 will increase by nine per cent over 2011.

The offers for engineering college graduates are relatively more conservative, seeing a mere two per cent rise. IIM Kozhikode, for instance, confirms that the average cost-to-company (CTC), per student hired went up by seven per cent for the Class of 2012, compared to last year. E-commerce firms like Flipkart have also joined the rush to hire from B-School campuses this year.
However, there were comparatively few international offers this year - slightly less than one per cent of the total offers made. Among those making the offers, West Asian companies were prominent. Dubai's Jumbo Electronics was present at many campuses, but Supermax, also from Dubai, stole the show with16 offers at IIM-B and 14 offers at IIM-A.

The thinning gap between offers made by top international and domestic companies was noticeable in many B-schools.

At International Management Institute, Delhi, Bloomberg's domestic offer of Rs 21 lakh was close to the Rs 27 lakh offer made by Jumbo Electronics.

However, there were also exceptions: at the Department of Management Studies, IIT Delhi, the highest domestic offer of Rs 19 lakh by Nomura was far behind the Rs 50 lakh international offer of Mitsui Chemicals.

"This ranges from Rs 40,000 and can go up to Rs 5 lakh in some cases," says Sandeep Chaudhary, Practice Leader, Compensation Consulting (Asia Pacific), Aon Hewitt.

The survey also reveals that the trend is more pronounced in BPO and consumer product companies. Companies, unwilling to go on record, confirmed that the bulk of the joining bonuses were in the Rs 50,000 to Rs 1 lakh range. "We have grown from a Rs 50-crore to a Rs 500-crore company," says Ravi Vora, Vice President of Marketing, Flipkart. "We need new talent to take our company to greater heights."

This year the company made 23 offers at B-schools, 120 at IITs, and 25 at other engineering campuses.

So all is well? Not quite. Says K. Ramkumar, Executive Director at ICICI Bank, who also heads its HR, customer service and operations: "At B-schools demand outstrips supply, and they continue to ignore issues relating to faculty quality and making their curriculum more relevant."

Ramkumar may be right. But until India's education system is able to meet the soaring demand for quality management talent, things are unlikely to change.