The hybrid from Toshiba, the Z20t is a no-nonsense business machine.
By Nidhi Singal | Print Edition: January 31, 2016 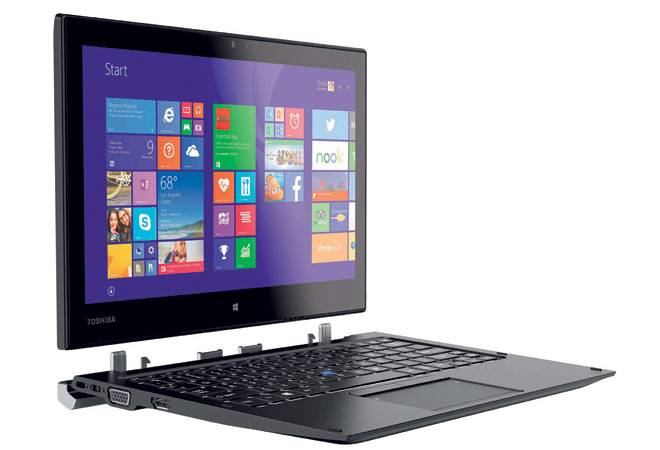 Hybrids seem to be the future of computing devices and Toshiba's Z20t comes with a detachable 12.5-inch screen, which allows it to work in a true-tablet mode. Priced at Rs 1.3 lakh, it targets the serious enterprise audience.

The Toshiba Z20t has a neat, straight-line design. Encased in a slim chassis in black, the 12.5-inch tablet is docked on a keyboard that converts it into a full-fledged laptop. The dual lock mechanism - one on the top of the keyboard and one on the left side - prevents accidently undocking the tablet. In tablet mode, it is 8.8 mm thin and weights 730 gm. Dock it on the keyboard and it weighs 1.51 kg. The 12.5-inch full HD screen is bright and crisp. While the default Windows wallpaper looked slightly washed out, once I replaced it with a full-HD wallpaper, the screen looked super bright. The touch response on the tablet was good. It looks good and is available in only black. The monochrome colour takes away the appeal and renders it the look of a blue-collared work horse.

The review unit ran on the Windows 7 Pro operating system. I felt it was an outdated OS in the age of Windows 10 OS, but the option to upgrade to Windows 8.1 (accompanied with the hybrid) and later to Windows 10 over the air, gives users the freedom and versatility to choose the operating system they are comfortable with. It is powered by the Intel Core M processor and has Intel HD graphics onboard. It comes with 256 GB SSD storage and 8 GB DDR 3 RAM. The machine performed most tasks without any lag and scored decently in benchmark tests, too. The keys on the backlit keyboard dock are well placed and typing is a delight on this machine. The trackpad is responsive and I often ended up selecting the options using the touch interface. The accupoint clickpad gives better accuracy, something that is present in ThinkPad laptops from Lenovo. There are a host of connectivity options on board - a micro HDMI port, micro USB port, and a micro SD card slot in tablet mode, and a full-size RGB port, HDMI port, Gigabit LAN and two USB 3.0 ports in the tablet dock.

One of the pros of using a hybrid is its battery backup. With Toshiba Z20t, the tablet and the keyboard dock come with individual batteries. The tablet offered me close to 7.5 hours of backup, while I still had 100 per cent charge in the dock, which gave the machine another eight hours of charge.

Usually charging adapters of laptops and hybrids are a bit too heavy, but Toshiba has done a great job by adding a small but punchy power adapter that easily fits in a laptop bag.

Why oil price crash has not helped the economy

This year will be about awakening of virtual mind