The trade and strategic moves we can expect if the BJP forms the government with Narendra Modi as PM. 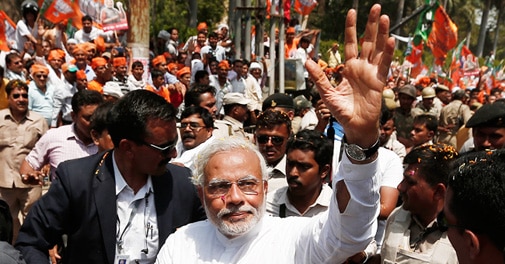 In 2006, India's Prime Minister Manmohan Singh signed an agreement with US president George W. Bush, which would finally allow Indian mangoes to be sold in the US, the world's largest economy. James Ziemer, then CEO of the Harley-Davidson Motor Co, a close friend of Bush, persuaded him to allow Indian mangoes into America - in exchange for Harley bikes on Indian roads. For India, the deal was bittersweet. India would pay to fly in a US official each time a mango consignment was ready for export, to inspect it for pesticide standards. Meanwhile, India relaxed pollution norms for Harley import.

In hindsight, a former commerce ministry aide, who was part of the negotiations, says: "We should have been tougher. It has gone on like that because we allowed it. India's attitude towards the US has been of subservience."

He spoke with Business Today on condition of anonymity. If the Bharatiya Janata Party (BJP) forms the next government, as is widely expected, it could mean an end to side-stepping on contentious issues at the cost of national interest. Rajiv Kumar, Senior Fellow at the Centre for Policy Research (CPR), a New Delhi-based think-tank, says: "Modi's foreign policy would be far more commercially and economically focused than previous governments.

It would be in keeping with what Vajpayee had followed - the approach would be more pragmatic, and away from grand gestures." Despite growing recognition of the potential of the African market, Manmohan Singh did not venture there until a 2007 visit to Nigeria, India's largest trading partner on the continent. The former commerce ministry aide quoted earlier says: "We should be maintaining a database and developing contacts in African countries.... The Ministry of External Affairs (MEA) needs to prioritise economic engagement. We make eight trips to America and the UK in a year, but it takes us years to plan a visit to an African nation."

N.R. Bhanumurthy, professor at the National Institute of Public Finance and Policy (NIPFP) in Delhi, says: "China realised the potential of Africa 10 years ago. India is still realising it. Reportedly, there are signs in Zambia, asking Africans to beware of Indians and Americans, with a Chinese translation." He says Indian companies operate in Africa without support from the Indian government.

He notes that Gujaratis are remarkably successful at doing business in Africa. Gujarat's historic and geographic advantage has created a network of traders, he says, and a Modi-led government would use this network to improve broader Indian trade ties with Africa.

Ideally, while the MEA should identify regions of potential economic significance and build relationships, the commerce ministry should facilitate trade with those regions. But, the MEA has tended to ignore economic ties in new markets and focused on high-profile visits to developed economies such as the US and UK, although trade equations between India and the rest of the world have shifted.

Trade with Asia now accounts for nearly half of India's exports. Africa and Latin America will be the next game-changers. Yet, India's trade with Africa is low ($70 billion in 2012), compared to $105 billion with the European Union (EU).

Indications are that the first country Modi would visit if he became prime minister may be Japan. He has often expressed admiration for the Japanese model of growth and the politics and economics of Shinzo Abe, Japan's nationalist Prime Minister. Columbia University economist Arvind Panagariya, a strong proponent of the Gujarat model and advisor to Modi's core team, says: "Among the three major countries - the US, China and Japan - Modi cannot visit the US first. China should not be the first. So Japan would be the first country." 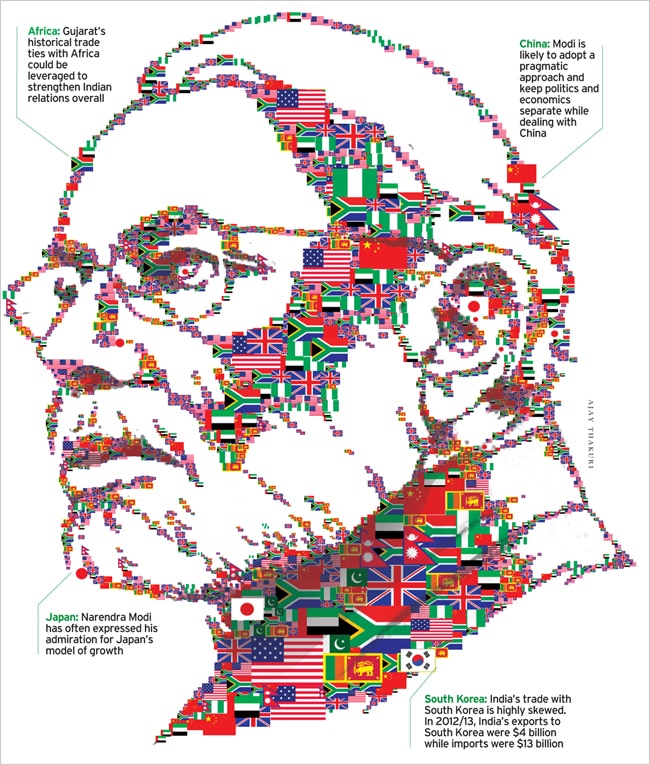 At the India Economic Convention in New Delhi in March, Modi spoke of the need for an overhaul at the MEA. He said: "It seems... our overseas missions' primary task is to file long reports...to gather information about their host country, write political and security analyses about the country's old friends and new. These dispatches are sent to headquarters, where they are read by the relevant division. While such procedures were justified in a previous day and age, in the 21st century, both foreign policy and the foreign office needed to change direction."

Amitabh Mattoo, professor of disarmament studies at Jawaharlal Nehru University (JNU) and Director of the Australia India Institute at the University of Melbourne, says: "The MEA is an outdated institution. It doesn't have the talent or expertise to deal with the rest of the world. The new administration's most important task would be to restructure it and open it up to the entry of experts outside the system."

The disengagement between trade and the MEA grew under the second term of the UPA, which got mired in scams and policy paralysis, and growth took a hit. India's economic halo started to fade, while the MEA continued to focus on increasing India's soft power.

A Modi government is likely to focus more squarely on the national interest. The BJP's manifesto talks of stopping unnamed countries running "roughshod" over Indian interests. At a campaign rally in Arunachal Pradesh, Modi called on China to abandon its "expansionist attitude". Experts say his pragmatism is likely to balance out his tough stance on China. He is not likely to mix politics and economics.

NIPFP's Bhanumurthy says economics is likely to be the cornerstone of foreign policy if the BJP forms the next government. It is likely to improve trade with Singapore and Japan, among other places. JNU's Mattoo says: "Australia, South Korea, Japan, Singapore - countries that perceive a threat from China - will gravitate towards India."

Australia, South Korea, Japan, Singapore – countries that perceive a threat from China – will gravitate towards India"

As for western economies, the EU and the UK have thawed on Modi. UK minister for business innovation and skills Vince Cable said in late 2013 during a visit to India that there was no ban on a visa for Modi. Earlier that year, British MPs invited him to speak in the House of Commons.

With India's economic realities, and the US wary of Modi's human rights record, it is unlikely that strengthening ties with Washington, DC is at the top of the BJP's agenda. The strained relations between the two countries came to the fore after US authorities alleged that Indian diplomat Devyani Khobragade committed visa fraud.

"There is a strong NRI connection with Modi," says Kumar of CPR. "They will exert influence on [the US government] to get things moving towards normalisation of ties." Remarkably, while India-US ties have been in cold storage, defence deals have thrived. It was during the Khobragade episode that India made defence purchases from Lockheed Martin. Around the same time, Boeing said India was a good country for business. The BJP manifesto talks of opening up the defence sector to private investment - something that may interest US companies.

India's relations with its South Asian neighbours - characterised by a lack of trust, bureaucratic issues and procedural bottlenecks in India - have let China take what could have been India's position. For instance, Indian investment in Sri Lanka is $800 million, while China's is $4 billion. China is funding roads, railways and airports in Sri Lanka. And Nepal has seen an influx of 'made in China' goods. This is despite India's advantage of an Indian Oil monopoly on oil retail in Nepal. Erratic supply and pricing have marred the Nepalis' experience of buying an Indian product.

Pakistani traders complain about tariff and non-tariff constraints, despite "most favoured nation" status, the Urdu translation of which (sab se pasandeeda desh) does not go down well with many Pakistanis. A Pakistan commerce ministry aide says: "Words are taking more weight over the objective. China and the US also had serious issues over the terminology of most favoured nation, and they resolved it."

The South Asian Free Trade Area was implemented in 2006 to facilitate trade in the region, but it has remained a non-starter. "India agreed to bring down the number of items on the sensitive list as soon as Pakistan reduces restrictions on Attari-Wagah border," says the Pakistani official. "Pakistan's industry is protesting that Indian industry has subsidies and economies of scale, and if the restrictions are removed, Pakistan's automobile, pharmaceutical, agriculture industry could be adversely impacted. We have finally arrived at a consensus, which we will present to the new government."

He added that if India's new government has a huge mandate, things will be much better. "There was huge enthusiasm and goodwill when Vajpayee visited Lahore in 1999. Pakistan and India together can determine the prices of cotton in the world."

Upcoming infra projects may provide a breather to new govt