Three months ago, Vivek Prasad, 32, a delivery 'boy' at the Vasant Kunj, Delhi, outlet of Ferns N Petals (FNP), a leading flowers-and-gifts chain, set out on foot at around 11.30 p.m. to deliver a bouquet of flowers, a box of chocolates and a teddy bear at a nearby address. Well before he could reach, however, the street dogs got after him. They chased him all the way to the colony he was headed for.

"I had to call the security guard of the colony to the gate to protect me and escort me to the right house," he says. Such incidents are all in a night's work for Prasad, who is just one of the 250,000-odd people this industry employs. The practice of door-to-door deliveries of flowers and gifts, mainly on the occasion of the recipient's birthday or wedding anniversary, is relatively recent in India, having begun only about 15 years ago. "Before this it was only five-star hotel guests or their regular customers who had flowers delivered at their door, courtesy the hotel management," says Gaurav Marya, Chairman, Indian Franchise Association.

Click here to Enlarge
Deliveries at the stroke of the midnight hour are a still more recent phenomenon, barely a decade old. But they are rapidly growing in popularity. Of the 150-odd deliveries FNP makes in the National Capital Region daily, for instance, around 10 to 12 are late at night.

While there is no separate revenue break-up for late night deliveries, the total organised market in gift deliveries is currently around Rs 500 crore, growing at 25 to 30 per cent a year. There are 27 organised players who deliver across most of the big cities, no matter where the order is placed from. Yet the organised sector is only five per cent of the total. Most people still source such gifts from the friendly neighbourhood florist, whose reach, though, may be limited. 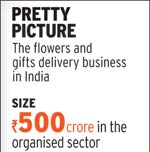 Click here to Enlarge
The organised players mostly employ the franchisee model. FNP, for instance, has 126 retail outlets across the country of which it directly owns only 15, the rest are franchises. The gifts delivered, be they flowers, chocolates, cakes or toys, are sourced in bulk from whole salers. 'Boys' like Prasad are paid per delivery - for midnight trips they get between Rs 100 and Rs 300 per trip, depending on the distance covered.

And hostile packs of strays are not the only occupational hazards. The two-legged variety of animal can also cause problems. Policemen patrolling the streets or manning barricades at night often trouble delivery boys no end. "There was a time when I used to accompany my boys making late night deliveries because few were willing to face police questioning on their own," says S.S. Baghel, CEO of the gift delivery portal, Phoolwala.com. "But now, with more people placing and receiving such orders, things are changing."

Organised players have also given their delivery boys identity cards to save them from police harassment. Recipients unused to late night deliveries are also sometimes extremely suspicious. Once, while delivering an anniversary surprise gift late at night from a husband to his wife, who was temporarily with her parents in Bangalore, Baghel had to confront the angry father who opened the door. "The old man said he suspected the package was a bomb and wanted to call the police," says Baghel, laughing. Not everyone is pleased with the midnight knocker, despite the gift he brings. Many yell at him and, having taken the gift, slam the door in his face
At other times tact is required. "One of my delivery boys had to wait for half an hour outside a customer's house for her father to fall asleep," says Anushree Sundareswara, owner of a Bangalore-based outlet franchised from the gift delivery chain, Florista. "He was delivering a package from the girl's boyfriend."

But once suspicions are cleared up, the delight expressed by recipients is also heartwarming. The angry Bangalore father, for instance, was transformed once his daughter, who had been sleeping, woke up following the loud noises at the front door. She arrived, quickly understood and explained the situation. "The father apologised to us, gave us tea and sweets and would not let us leave for a long time," says Baghel. Most touching, says the boys, are the responses of old parents who receive gifts from children living far away.

Should PDS be replaced with direct cash transfer?