It was quite a public relations splash. Donald Trump came jetting into Pune way back in August 2014 to inaugurate the first of the Trump Towers in India. The super luxury residential towers were being developed by the Chordias of Panchshil Realty. Unfortunately, there was a small last-minute glitch. Nobody had figured that the 'T-Bird', as Trump calls his personal $100-million Boeing 757-200 jet, was too large for Pune's airport facilities, and he couldn't get off. After being stranded in the plane for an hour, the ground staff put together a special ramp, and Donald Trump descended to Mother Earth.

The tycoon, someone reported, was nonplussed and after an hour of jovial bantering went on to open his first commercial franchise in India - two 22-storey towers in Pune's upscale Kalyani Nagar - at a gala dinner of the who's who of Bollywood and real estate. This was followed by The Trump Organization franchising a second 75-storey tower in Mumbai to the Lodha Group.

The Chordias, or for that matter the Lodhas, then didn't have a clue that their brand icon would run for US President; and what more, win handsomely. That did not stop them from cashing in when Trump went past the post on November 8 last year. The Lodhas in Mumbai, reeling under the paralysis of demonetisation, came out with huge billboards advertising the Mumbai Trump Tower with the larger-than-life image of the President, and the catch line "Trump is Back".

A bigger drama played out in New York. Soon after his election victory, and much before Trump had met Prime Minister Narendra Modi or for that matter any world leader (with the exception of Japanese Premier Shinzo Abe), Trump was splashed across media shaking hands and celebrating with his Pune partners, Sagar and Atul Chordia, and The Trump Organization's India representative, Kalpesh Mehta, in New York's Trump Towers. What was thought to be a marketing coup boomeranged, with the US media and opposition seizing on the "conflict of interest" angle between Trump as President and Trump as Businessman.

Result: By February, soon after his January 20 inauguration as President, The Trump Organization had to throttle back and abort all new plans for Trump businesses the world over. The Chordias, caught in the cross-fire, had to abandon their second Trump-branded project in Pune.

The original Trump Tower had opened in 1985 as a 68-storey, mixed-use skyscraper in midtown Manhattan, in New York city, and houses The Trump Organization headquarters and a three-storey penthouse condominium spread over 11,000 square feet where Donald Trump, the businessman, lived with his family. The tower's valuation continues to change depending on the rental values it earns from big brands such as anchor tenant Gucci; at peak in 2014, it was valued at $600 million.

As a brand, the tower emerged as a symbol of not only eye-catching design and grandeur, but of opulence, too. Its success can be gauged from the fact that its 263 condominiums sold out in months at prices starting at 600,000 dollar and going up to 12 million dollar. Its celebrity residents included the likes of Sophia Loren and Steven Spielberg. These sales earned Donald Trump close to 300 million dollar, overtaking the construction cost of $200 million.

The Trump Organization is today a diversified real estate company with over 500 businesses and subsidiaries. It reported revenues of 9.5 billion dollar in 2016. As a realtor, the company sells, rents and manages residential and commercial properties, runs golf courses and hotel chains and franchises the "Trump" brand worldwide for royalty.

Trump Towers across the world are massive, have an in-your-eye design, and have luxury written all over them. The Trump Ocean Club in Panama City - completed in 2011 - has a tall, sail-like form and includes 369 hotel rooms and 700 condominium units. All occupants get to use a private beach club among the development's amenities. The pair of Trump Towers, Istanbul, the first in Europe, have an interesting conjoined architecture - one housing offices and the other containing over 200 residences; there is a shopping mall and a multiplex cinema in the connecting section. But the recession has caught up with Trump, too. There is a realisation that super luxury is not an endless market in the US, and if the Trump footprint has to expand, it has to aim lower. This June, The Trump Organization announced its entry into Trump-branded three-star hotels in the US in alliance with a mid-level hotel chain called "American Idea". The hotels will target millions of Americans who cannot afford gilded hotels, condos, clubs and golf courses but want a bit of the Trump action. The recession also pushed Trump to look harder at international luxury markets, and that's where India figured.

Trump's entry into India came through Tribeca Developers, a company founded by Kalpesh Mehta in 2012. While cutting his teeth at the Wharton School, University of Pennsylvania, and then the Carlyle Group in New York managing luxury realty projects, Mehta, as a student and business professional, came to be close friends with Jared Kushner, Donald Trump's son-in-law and adviser. In most of the 18 countries in which The Trump Organization had developed interests, the deals were for branding and franchising. This was the format Kushner was looking for in India, too; he appointed Kalpesh Mehta as Trump's exclusive representative in the country.

The first deal that came their way in 2013 was with Rohan Lifescapes. Plans were announced for a Trump Tower in Mumbai, but the project never got off. Next came the franchising deal with the Chordias. They are known to be backed by politician Sharad Pawar, and with whom Pawar's daughter Supriya Sule is an investor.

The project, completed last year, developed two 22-storey Trump Towers in Pune's Kalyani Nagar, housing 44 luxury condominiums. Each apartment, starting at Rs 15 crore a unit, covers 6,000 sq. feet, comes with five bedrooms and a home theatre, and occupies a full floor. To justify the 25 per cent premium on equivalent properties in the area, the Trump Towers offers luxury services such as concierge and doorstep laundry services, apart from a John Abraham-branded fitness centre. The interiors are imported - kitchens from Germany and marble from Italy. 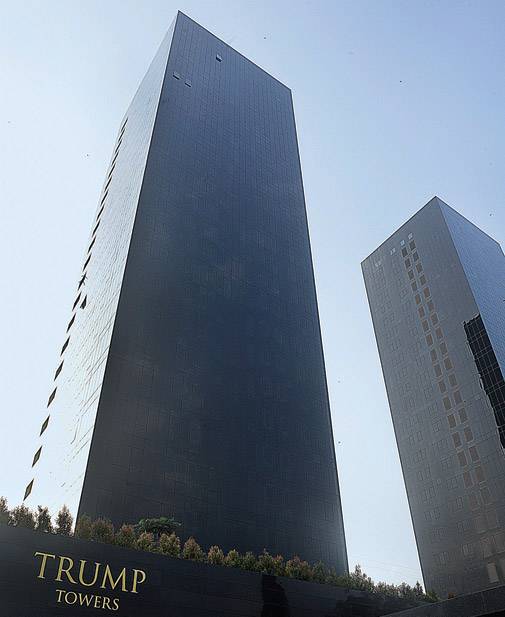 The 'Trump' brand has also been franchised to the Lodha Group in Mumbai, which is currently developing and marketing a single 75-storey tower as part of a 17-acre layout called "The Park" in what used to be the Mumbai Textiles Mill in Parel. Arvind Subramanian, Group CEO of the company, told BT that the watchwords for the project were "indulgence and exclusivity". Luxury services for those who will buy residences in the tower will include concierge, and options to hire a Rolls Royce or a private jet. Pomp and comfort will be on tap, for which the famed "White Glove" butler service has been roped in.

The three- and four-bedroom apartments, plush and roomy with great sea views, start at `9 crore a unit. The Trump residences also have six duplex penthouses on the top two floors that are priced at `18 crore a unit. The 75-storey tower is being designed to stand out among Parel's skyscrapers with a golden glazed glass facade backed up with a perforated aluminium feature to make the tower glisten and shine with the changing light. A water body at the entrance is designed to reflect the tower's striking exteriors.

To clinch sales, does the company have to market the Trump brand hard? "The profile that is buying into the project is NRIs, business owners and senior professionals. These clients are usually well travelled and evolved. They know that the Trump brand stands for luxury and well-managed residences. No, we don't have to push too hard," says Subramanian.

The Lodha and the Chordias make it clear that The Trump Organization or any of its affiliates have not invested in these projects, nor do they own, develop or sell any of these assets.

Besides these, a representative of The Trump Organization who declined to be named confirmed that there are three other Trump-branded projects coming up in India. In Kolkata, leading builder Harsh Vardhan Patodia, promoter of the Unimark Group, is developing a residential project with Trebica Developers. The 38-storey tower, located on the city's eastern bypass, will offer four lakh square feet of luxury residences. The Trump Organization has also franchised another Trump residential tower, over 50-storey high, being developed in Gurgaon by the construction company, M3M India, in partnership with Trebica Developers.

"Both these projects are in equity partnership with Trebica, and will be available for commercial sale from the last quarter of this year," the Trump representative said. Another Trump tower coming up in Gurgaon will offer around seven lakh square feet of commercial, office, and is being developed solely by the Delhi-based IREO Group headed by Lalit Goyal.

Those promoting these projects are tight-lipped on what they pay Trump for the franchise, but it is known the consideration is usually in the 5 dollar to 10 million dollar range, and sometimes a small share of the revenue, too. Trump Tower Istanbul's deal was, for instance, at 10 million dollar.

Preceding Donald Trump's inauguration as President on January 20, the US media exploded with the "conflict of interest" controversy. It was alleged that Trump and his business associates were using his position as head of state to further business interests. Among the instances cited was his well-publicised foray in Pune with the Chordias. In quick fire-fighting measures, Trump announced that he would be stepping down from all corporate positions in his businesses and transferred his assets to a Trust controlled by his two eldest sons, Eric and Donald Trump Junior, for the period of his presidency.

A Trump lawyer, Sheri Dilon, also told American media that The Trump Organization had decided not to enter into any new overseas deals while Trump is president and will undertake domestic projects only after a company ethics adviser has approved them. The Trump representative in India said this had impacted growth. "There was a huge pipeline of requests for franchising the Trump brand, which we now have to turn down. Only those alliances that had been sealed before the presidential inauguration are going forward," he said.

On the Tribeca website, there is the legend: "The next big leap of the Indian real estate market is branded super luxury properties, and who better to set the momentum than Trump." The Managing Partner of Tribeca, Kalpesh Mehta, may have coined his "quote" when Donald J. Trump was still Trump the Businessman. Today, with Donald J. Trump, the US President, lurching from one controversy to another, is Trump still a premium brand worth paying millions for? Alexander Bohnekamp, CEO of H'Mark Hospitality, which does extensive business in Dubai and West Asia, told media persons that his business had been impacted in the aftermath of Trump's Muslim travel ban. An angry owner of Trump Towers, Istanbul, had threatened to take down the "Trump" signage.

The Trump brand, before he became president, was positive. It was associated with the aspiration of the rich to indulge in luxury, says Sandeep Goyal, Chairman of Mogae Media, and a well-known brand analyst. "Today, with Trump coming out as loud and boorish, there is almost nothing 'presidential' about him. The brand has been sullied, and is eroding by the day. Why should you want to pay millions if it is not aspirational?" asks Goyal.

Meanwhile, recent surveys suggest that the demand for high-end homes priced at `10 crore or more in the metropolitan cities has been shrinking following the long recession and last November's demonetisation. In Mumbai, a survey by property market tracker Liases Foras last year for 2015/16 showed the inventory of homes on sale above `10 crore had increased to 3,718 from 3,072 in the previous year. Post-demonetisation, the buying is even slower.

In this market, Trump-branded luxury homes and luxe products such as golf courses may have to wait a while. Perhaps, after Donald Trump completes his four-year term!