TVS vs Bajaj: The fight gets dirty

Bajaj Auto has accused TVS Motors of stealing its technology, a charge it has denied. TVS, which is doing badly in bikes, is entering the three-wheeler market that is dominated by Bajaj. Which way is this battle headed?

On September 1, Bajaj Auto dropped a bombshell by accusing rival TVS Motors of “infringing” its patented digital twin-spark technology, DTS-i. TVS, expectedly, reacted angrily and denied the charges, and even threatened to file a Rs 250-crore libel suit against the accuser. So, sparks were expected to fly when Bajaj Auto Managing Director Rajiv Bajaj and TVS Motors Managing Director Venu Srinivasan came face to face on a panel discussion at the Society of Indian Automobile Manufacturers (SIAM) annual convention in Delhi on September 6. But the gathered media contingent was disappointed. The duo was the picture of civility.

BT learns that the panel discussion was preceded by high drama. Senior SIAM officials and members, including a highly respected industrialist, had reportedly “coaxed” Bajaj and Srinivasan to hold a oneon-one, which lasted about 45 minutes, to sort out the matter. The mission was only partially successful— the SIAM panel discussion passed of uneventfully and the two were photographed flanking Hero Honda Chairman B.M. Munjal, but the dispute between the two remains unresolved. There’s a lot at stake for both companies; hence, the high decibel mudslinging. Bajaj, which had fallen behind in the motorcycle sweepstakes, has turned around its fortunes over the last five years mainly on the back of the DTS-i technology (See What is DTS-i?) which gave it a commanding share of the higher end (125cc and higher) bike market. It alleges that TVS’s new 125cc bike, Flame, uses this same technology, which has made its 150cc+ Pulsar the leader in its category.

Bajaj Auto executives cite the TVS application for revocation of the DTS-i patent as “proof” that the latter was aware that they were “treading on protected IPR.” After a brief flurry of threats and counterthreats of going to court, things seemed to have cooled down a bit. Bajaj executives say that they will take matters further only after “the product (TVS Flame) is launched” in the next two months. For now, they say that they are talking to lawyers and following a wait and watch approach to the whole matter. “Right now, we are sailing with the wind and will see how it goes,” says S. Ravikumar, VP, Business Development, Bajaj Auto.

TVS, meanwhile, has labelled the Bajaj allegations “a malicious attempt to tarnish the fair name of the TVS Group, which has consistently maintained the highest standards of ethics in business”. It claims that its offering, which it developed in conjunction with AVL, Austria, is completely different from what its rival offers.

This claim is borne out by independent experts. “Bajaj is a very passionate technology-driven company and might have reacted in a hurry without seeing TVS’s product,” says Rishad Cooper, an expert on engines with Autocar India, a leading auto magazine, who has had the opportunity to study the Flame. Cooper believes that TVS’s product is significantly different from what Bajaj has patented. “The twin-plug technology itself has been around for several
decades. It’s a very broad area around which several patents exist. The TVS Flame’s fuel efficiency and performance can be attributed to the use of three valves and not two plugs. In that sense, I believe that there can be more patents in this area,” he says, adding that he “is not sure why TVS has applied for a revocation of Bajaj’s patent”.

Srinivasan, who has declared that TVS will continue to use the technology, has told the media that “we are very confident of what we’re doing”. Rajiv Bajaj, on his part, has gone on record saying: “We have no overwhelming desire to go to court.” But the ding-dong battle shows little signs of abating.

So, why did Bajaj jump the gun? At the heart of the spat is a battle for the lucrative 125cc bike market. Last year, the entry level 100cc segment shrank drastically. During the first quarter of 2006-07, 100cc bikes accounted for nearly 75 per cent of the market. That has now fallen to 60 per cent. “This has happened not only because of a hardening of interest rates but also due to unexciting product offerings. At the same time, the 125cc and 150cc market has grown 16 per cent,” says Amit Nandi, General Manager, Marketing, Bajaj Auto. To tap into this exciting market, Bajaj and TVS are moving aggressively into this segment with new product offerings. 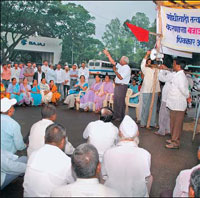 Bajaj Auto has just launched XCD 125, a bike that the company says “costs about the same as a 100cc bike, has the performance of a 125cc bike and the features of a 150cc bike”. Bajaj hopes that this offering will make new customers upgrade to the 125cc category and “kill off the 100cc market.” Hence, its aggression in protecting its turf. However, a Hero Honda spokesperson says “the slowdown in the entry-level 100cc market is only a temporary phase” and it will recover once interest rates ease. The battle is even more critical for TVS Motors, which is now spreading its wings to South East Asia. Its sales volumes declined 39.4 per cent to 130,161 units in the first quarter of 2007-08, compared to the previous corresponding quarter, its market share dipped below 10 per cent for the first time and its margins to 1 per cent. It is counting on the Flame and the 160cc Apache, which enjoy higher margins, to claw its way back into the reckoning. Incidentally, Bajaj’s 125cc bikes are also much more profitable than its 100cc offerings. “The ex-showroom price difference between the 100cc Bajaj Platina and the 125cc Bajaj XCD is about Rs 7,000, though their costs of manufacturing are almost the same,” says Nandi. Adds Vaishali Jajoo, Auto Analyst, Angel Broking: “The fuel efficiency of 125cc bikes has improved and their prices are falling; this has greatly reduced the total cost of ownership for 125cc bikes. That’s why players like TVS and Bajaj are getting aggressive on the 125cc front.” So, for one, it’s a battle to save its bread and butter and for the other, it’s a battle for survival.

There could be another reason for the spat between the two companies. TVS Motors, which recently launched seven new vehicles, is targeting a slice of the three-wheeler market, in which Bajaj Auto has a dominant 55 per cent share.

Srinivasan, who declined to speak to BT, citing potential litigation, has announced his intention of manufacturing up to 100,000 three-wheelers, which will compete head-on with three-wheelers from Bajaj and Piaggio. Interestingly, TVS has not disclosed price details of its threewheelers and has opted to start off with the more primitive two-stroke variant (albeit with both CNG and LPG options for now), even though a large part of the market has already made the transition to the more efficient four-stroke variant. But its plan of focussing primarily on the southern market (and Maharashtra and Gujarat) may help it score over its rivals. It has one of the best marketing and service networks in the region and plans to leverage this strength to build up critical mass.

Can it muscle into Bajaj’s turf at a time when its main product is under pressure? “There is a 50:50 chance that TVS will do well in the three-wheeler market. It’s a good way to de-risk itself. It’s also a good move to diversify its product portfolio. The profitability in this segment is better than in the twowheeler segment,” says Jajoo of Angel Broking.

So, which way will this battle go? The final picture is still far from clear. But of the two, Bajaj Auto seems to be in a happier position, being the incumbent market leader in both the product categories in which TVS is challenging it.

Bajaj Auto’s 45-year-old plant at Akurdi has been in the news during the last fortnight for all the wrong reasons. It started in mid-July with Bajaj Auto MD Rajiv Bajaj hinting at the possible closure of a plant at the company’s annual general meeting. A month-and-a-half later, on August 29, Bajaj announced the closure of the plant that employed 1,310 staff and some 847 workmen. The reason that the company cited was the high sales tax and Octroi levied by the government that, it said, rendered the plant not price competitive. The company said it would continue to pay its employees wages for five-and-a-half days every week even if they did not have to report to work. No Voluntary Retirement Scheme (VRS) was initiated.

Barely 24 hours after that announcement, everybody who was somehow related to the matter jumped into the fray with their own opinions on the issue. Union Minister of Agriculture Sharad Pawar stepped into the negotiations exhorting Bajaj not to close down the plant. The Shiv Sena, through its union, threatened to protest the closure. And the worker’s union of the plant were miffed because they were not consulted before the decision to close down was announced. A week after the initial announcement, on September 9, Rajiv Bajaj said that he would not buckle down under pressure and there would be “no going back on Akurdi plant closure.”

The very next day, the company did an about turn. In a statement issued by the company, Rajiv Bajaj said that “it is not being shut down” and all plant workers were “reporting to work six days a week as per their normal routine.”

The main reason for Bajaj wanting to close down the plant was that it has shifted its 100cc Platina line, which is a low-margin bike, to Pantnagar in Uttaranchal to get excise incentives. Also, its share in scooters, which it made at Akurdi, has fallen dramatically.

(With Rahul Sachitanand and Kushan Mitra)