Despite the joint CEO experiment not coming off in several high profile cases globally, Chairman Azim Premji is betting on the model to unify Wipro’s IT businesses and spur growth. He is rather confident that the teams are ready and the timing is right. BT's Rahul Sachitanand finds out whether the new arrangement will work.

Wipro’s 28-acre campus on Sarjapur Road, on Bangalore’s eastern periphery, is an oasis of calm on a Saturday morning in early May. Despite being a weekend, this verdant campus has been a beehive of activity for the last few months, with employees, beginning with the 63-year-old Chairman Azim Premji, spending 18-hour workdays and sacrificing weekends as the company transitions into a new management set-up. From a five-person management committee put in place after the former CEO and Vice Chairman of Wipro Technologies Vivek Paul quit, Premji has now taken the next step in the transition, appointing long-timers Suresh Vaswani and Girish Paranjpe as Joint CEOs of the IT business and putting in place a simplified management structure to take Wipro’s IT business into the big league, possibly into the top 10 global IT companies. 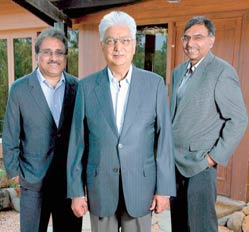 Azim Premji with Girish Paranjpe (R) and Suresh Vaswani
Before he can achieve these lofty goals, Premji, who took over a creaking vegetable oils business and transformed it into a $5-billion soaps-to-software conglomerate, will need to prove that the co-CEO model will work at Wipro. There are several high-profile cases globally where the joint CEO experiment has failed.

These range from Citigroup, where Citicorp’s John Reed and Travelers’ Sandy Weill fell out after the historic merger to create Citigroup and the former left the corporate world for a while, only to rejoin as the interim CEO of the New York Stock Exchange; at consumer goods giant Unilver, which also experimented with two co-chairmen, the executives sparred for territory.

Elsewhere, in the IT industry too, companies such as Sapient have flirted with the co-CEO model, but slowing growth and issues between co-founders Jerry Greenberg and Stuart Moore saw the latter depart.

The Wipro Chairman is, however, unfazed. “I think the teams are ready, the timing is right. Our size and complexity have increased and with two CEOs, this is an appropriate time to seize the opportunities that are coming up,” he says. At the same time, he recognises that the outsourced IT services market has been transformed and Wipro has grown into an 80,000-person entity with customers in 50 countries. “(There is a) necessity to integrate the domestic and global businesses, which we’ve done through our joint CEOs and we are in a big play for large, complex deals, which require large transformational capabilities… and faultless execution,” says Premji.

Prior to this management set-up, Premji had what was evidently a stop-gap five-man management committee in place, and took a much more hands-on role with management. This structure was necessitated by the abrupt departure of Vivek Paul, the former CEO of Wipro Technologies and Vice Chairman of Wipro Limited, who was among half-a-dozen vice-chairmen appointed by Premji in an effort to distance himself from the operational intricacies of managing his business.

“I was running a $4-billion highly service-oriented company for years,” says Premji, “The timing is appropriate and the leadership is ready for change.”

Premji took his time and mulled multiple organisational structures before taking a final call on the joint CEO structure. Rather than commission an external consultancy to research his alternatives, he commissioned Wipro Consulting, his own set-up, to look at different succession models used in the global IT industry and beyond.

The six-member team, led by the head of Wipro’s consulting unit Anurag Srivastava, was commissioned in July last year to make this study and took three weeks to deliver its report. “We undertook this management overhaul in two stages,” says Pratik Kumar, EVP, HR, and the sponsor for the study, “and our board took a final call on what changes to make”.

The study itself looked at several examples in the IT industry, including companies such as Dell, Microsoft and Sapient who have used the co-CEO model with varying degrees of success as part of their research.

Some options considered included staying with an existing management structure, appointing just one CEO or overhauling the entire system and putting a new one in place. “Most joint or co-CEO structures are made by force, especially in the financial services industry, but (forced structures) rarely work,” admits Paranjpe, who was previously President of the financial solutions business for Wipro. “As companies grow into multiple verticals, business units and geographies, they may find it difficult to locate one executive with all the required skills to be appointed CEO,” reasons Vasanthi Srinivasan, Associate Professor of Organisational Behaviour and Human Resource Management at IIM Bangalore. “In Wipro’s case, clearly the new joint CEOs have a complementary set of capabilities and they were, therefore, chosen for their roles,” says Srinivasan.

Pratik Kumar
After the consulting team spent three weeks on its study, Wipro’s board spent another few weeks taking its final decision. “This move gives a single investor view of Wipro’s IT strengths and enhances synergy and scalability of our business,” says Suresh Senapaty, Wipro’s CFO, who was recently appointed to the board. Besides appointing two CEOs and unifying its technology business (formerly Wipro Technologies, focussing on the global market and Wipro Infotech, its domestic and Asia-Pacific arm), the firm will now be able to cross-leverage its expertise across these units to bag large deals, says Paranjpe.

Company officials point to the $600-million deal Wipro bagged from Aircel, a mobile operator, as a sign of the times. “We successfully leveraged skills from our global telecom business and our total outsourcing skills with Wipro Infotech to seal the deal,” says Vaswani, whose previous role saw him oversee this unit and manage Wipro’s IT services lines.

Suresh Senapaty
Besides managing a business that is expected to grow to over $7 billion this year (and perhaps 100,000 or more employees), Premji will have to manage two co-CEOs who have divergent personalities and complementary organisational capabilities. While Vaswani is a rock music-listening and guitar-playing chief executive who loves bands such as Guns N’ Roses and Pink Floyd, Paranjpe has moved from playing badminton to practising yoga and like his wife, is a Hindustani music aficionado (see How Alike?). At Wipro, too, their colleagues identify each of them with distinct capabilities that, if managed, could work well for the firm. “Suresh is the customer-facing CEO who can act as the marketing and branding face for Wipro. Girish is a numbers man who can manage process and operations as well as the back end that is equally critical,” says Jessie Paul, Chief Marketing Officer, Wipro Technologies.IIM-B’s Srinivasan says that Wipro needs to clearly delineate responsibilities for each CEO and that both of them need to respect each other’s strengths and weaknesses. So, how do responsibilities divvy up between the two? Paranjpe’s oversight includes communications, media and technology, finance and solutions, global delivery and global programme management. In addition, many support functions around CIO/administration and facilities, e-enabling, CTO and systems engineering and integration will also directly report to Paranjpe. On the other hand, Vaswani will continue to run the Asia Pacific and domestic business (Wipro Infotech) and will now be in charge of BPO, TIS testing services, EAS services, manufacturing and healthcare, energy and utilities, retail, and transportation and services. Like his counterpart, Vaswani will also handle related functions such as sales, marketing and quality.

In a few months down the road, one of them (possibly Vaswani) may relocate to the US, leaving the other greater room back home in Bangalore. Until then, Paranjpe will continue to work out of the Electronics City facility in the city, making daily trips to the Sarjapur corporate headquarters, where Vaswani will retain his office. “In any case, we will be on the phone and e-mail constantly,” says Paranjpe. What happens when the co-CEOs can’t get to agree on an issue? “The Chairman will play the role of umpire when there are unresolved issues, which is my job,” quips Premji.

In choosing Vaswani and Paranjpe as CEOs, Premji may have caused some heartburn with several senior managers. Sudip Banerjee, who moved from heading the enterprise business to Azim Premji Investments, Premji’s privately-held investment arm, Sudip Nandy, Wipro’s former M&A marksman and T.K. Kurien, the former BPO head, are all said to be unhappy with their new assignments. In addition, some old Wipro hands such as Mythili Ramesh and Ramesh Emani have quit (P.R. Chandrasekar, President Americas and Europe for Wipro, too has left). “This is not about the others not being good enough… it’s about picking a captain for your team and sticking with your choice,” says HR head Kumar.

Sudip Banerjee
But the rejig is good news for some relatively young managers, who now get to take on greater responsibilities. For example, Soumitro Ghosh, an expert in financial services, has been given overall charge of the financial solutions unit, replacing Paranjpe. With Manoj Punja, who headed the technology, media and transportation services vertical, moving to the US, younger leaders such as N.S. Bala and B.M. Bhanu Murthy will be given wider leadership roles. Wipro has also created a global delivery head in Sambuddha Deb, its former quality head, to try to improve the quality of the delivery centres across the world. “Seamless global delivery is absolutely critical. A constrained delivery footprint will be a significant inhibitor, especially in bidding for the largest deals,” says Partha Iyengar, Vice President, Gartner India. According to Vaswani, this reorganisation has also broadened the scope of some groups like product engineering and BPO to cover more industries and has made the once nascent consulting unit a significant, 1,000-person business line. Bidding for and winning large global contracts is also a key reason for this rejig and a niche where Wipro lags its peers. “There are significant differences in the market; one is our size, two is our footprint, three is the necessity to integrate the domestic business and global business, which we’ve done through our joint CEOs, four is that we are in a big play for large, complex deals, which require large transformational capabilities, a lot of transformational selling, and faultless execution,” says Premji.

From a company that focussed on winning application development and maintenance deals from technology companies, Wipro has expanded its bouquet of offerings to cover everything from BPO to consulting and gets 55 per cent of its revenues today from enterprise customers.

Wipro has already taken its first steps as it seeks to be seen in the same league as global giants IBM, Accenture and EDS. Its deal for Infocrossing has given it access to five data centres in the US and a toehold to large contracts that required this infrastructure.

T.K. Kurien
“We’ve actually bagged one such deal ($600-millon healthcare deal) with the state of Missouri. We have had no undesirable attrition; it’s a good team, we have 900 Americans and we’ve moved some of them into Wipro,” says Premji.

Rather than focus on being just an adept vendor of IT services, Wipro is now trying to re-invent itself as a trusted business advisor, says Premji. “This includes the consulting front-end, but also means providing more than a small sliver of services to customers,” explains Paranjpe. Adds Gartner’s Iyengar: “Emerging mega-vendors are coming from ‘left field’ (in this case the Indians) to challenge the incumbent mega-vendors and possibly dethrone them from their position in the medium to long term.”

That sounds like Premji’s plan too, except that the business environment today is much harsher than it was even a year ago, and Wipro is leaning on a risky co-CEO model to make the leap. But as Premji says, there’s nothing permanent about any structure. Eventually, though, it may be up to his son, Rishad, 34, currently earning his spurs as a manager under Paranjpe’s watchful eye, to deliver on Premji’s dream.