Andhra Pradesh, once a leader in IT, services and modern retail, may have been the state that got the Congress Party to power at the Centre in 2004 and 2009. But two and a half years is a long time, and things have changed. The protracted delay in settling the Telangana statehood issue has riven the state, and it is telling on investment and the state's political image.

The Andhra Pradesh Congress has been shaken by the creation of a splinter party by Y.S.Jagan Mohan Reddy, the son of the late Y.S. Rajashekhara Reddy, former chief minister and a Congress leader, and by losses in recent by-elections to the prostatehood Telangana Rashtra Samithi (TRS). In 2009, the Congress promised a Telangana state, and its MPs in the region are now under pressure, says Dr. Gaddam Vivekanand, doctor-turnedentrepreneur and one of eight Congress MPs recently suspended from the Lok Sabha for four days for disrupting proceedings over the Telangana issue.

"Andhra Pradesh no longer figures on the list of top states for investors, because of the perception of uncertainty," says Srini Raju, Chairman of Peepul Capital, a private equity fund. "It has become politically volatile. Every decision is questioned by some politician. Bureaucrats hesitate to take any decision, and projects get stuck or have to explore options in other states." 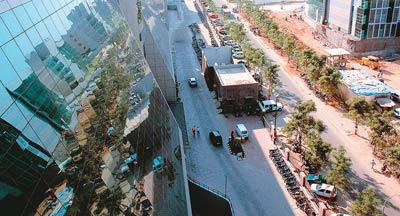 HITEC City, Hyderabad
"For nearly two and a half years, there has been a virtual freeze in new investments to the region," says Devendra Surana, Vice Chairman of the Federation of Andhra Pradesh Chambers of Commerce and Industry. Pradeep Dhobale, Executive Director, ITC Ltd, says: "While there seems to be a clear desire to seek and attract new investment, the government must take concrete steps to accelerate the decision-making process."

Economic calculations
A few years ago, even uttering the name Telangana was taboo in the state assembly. K.T. Rama Rao, MLA and son of TRS supremo K. Chandrasekhara Rao, says: "Today, not a day passes without demand for it being voiced in the state assembly and even in Parliament."

Economist and former Planning Commission member C.H. Hanumantha Rao, who has studied the region for years, says: "There is a feeling that Telangana has not got its due in investment allocations, and that 'surpluses' from there - the difference between what ought to have been spent and what was spent - have been diverted to other regions." Rao says there is no way to ascertain exactly how public expenditures are distributed across regions in the state, as the relevant information ceased to be available after the Telangana Regional Committee was abolished in 1973. But, he adds, businesses "can afford to be indifferent" to the Telangana issue, especially if they have a national market. He says: "After all, uncertainties cannot be forever, therefore businesses should take an enlightened view...for their market will not be affected."

But many investors say they are already grappling with enough uncertainty - global economic worries, inflation and the fact that domestic interest rates have increased 13 times in 18 months - and have no stomach for the additional uncertainty of Telangana.

Gung-ho Government
State officials deny that investors are worried, citing the 243 MoUs they signed in January this year, for investments totalling Rs 6.49 trillion (a trillion equals 100,000 crore). These were signed with the likes of ITC, GMR and the Yash Birla Group. However, they are still far from actual investments.

ITC's Dhobale says his company's project is awaiting approval. Though the plan is to invest Rs 6,000 crore to expand its pulp and paper manufacturing, he says, the final shape of the project, for which there is no timeframe yet, will depend on the nature of the approvals. "We want the current uncertainty to get over soon," says P.V.R. Murthy, Group Finance Director, Yash Birla Group. "What needs to be done is to remove the uncertainty in the minds of the aam janta, and the leaders should say clearly what exactly they want." The Yash Birla Group's Rs 13,500-crore investment plans for the state include a sports city in Hyderabad. Murthy says they are awaiting the government's reply on land allocation and approvals.

IT Underwhelms
Andhra Pradesh's success at attracting high-profile global tech companies is well known. Facebook, which set up shop in Hyderabad in 2010, was a feather in its cap. Other big names in the state include Amazon, TCS and Infosys.

But, as Peepul Capital's Raju points out, these are not manufacturing industries and do not need government clearances for land, environmental and so on. Many in the IT industry also say the number of jobs generated is modest. According to some estimates, Facebook has created no more than 200 jobs. 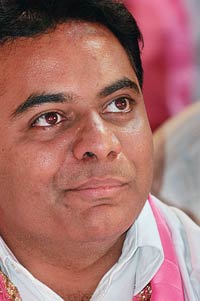 Not a day passes when the demand for Telangana is not voiced: K.T. Rama Rao
B.V.R. Mohan Reddy, Chairman of Infotech Enterprises, says the Telangana agitation has not bothered IT companies in the state, but "brand Hyderabad" has suffered, especially in the eyes of foreign investors.

Despite the entry of new companies and expansion by existing ones, IT exports from the state have become sluggish. According to data from the Software Technology Parks of India, Hyderabad, exports slid from double-digit growth a few years ago to just over four per cent last year. Businesses can afford to be indifferent over the Telangana issue: C.H. Hanumantha Rao
B.S. Nagesh, Chairman of the Retailers Association of India and long-time observer of Andhra Pradesh, says: "Many leading Indian retail chains chose Hyderabad as the location for their first or second major outlet. But today other cities have overtaken Hyderabad." He cites the example of Bangalore, which is two and a half times Hyderabad's size in terms of retail presence. Nagesh, who is also on the board of Shoppers Stop, clarifies that he is speaking as head of the business lobby. 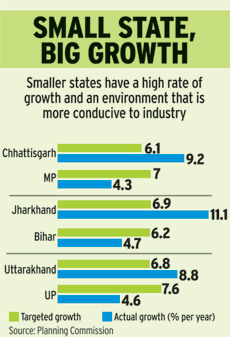 Click here to Enlarge
"Consumer sentiment drives retail, and political uncertainty seems to be taking its toll on organised retail in Andhra Pradesh," says Kumar Rajagopalan, CEO, Retailers Association of India. "Hyderabad, where modern retail grew at 20 to 22 per cent until 2009/10, is now growing at around eight per cent."

Modern retail is growing at around 20 per cent a year in cities such as Bangalore, Pune, Mumbai, and Delhi and the National Capital Region (NCR). Rajagopalan says Andhra Pradesh lacks clarity on retail. For instance, getting permission to do business 365 days a year is a time-consuming exercise, in contrast to almost automatic clearance in Delhi-NCR. Besides, inspections are haphazard, and the cost of operations has gone up because of power shortages and increased levies. As things are, Andhra Pradesh is not the sort of environment businesses seek in an uncertain world.

The Biyani way of dealing with debt