Dance of the damned

Rohit Tiwary, 28, was in a fix. Five days a week, his evenings were consumed by the tiny BPO outfit he had set up in Chennai. Faced with demands from his girlfriend for more quality time together, he did what any man would: spend three to four hours on the phone with her every day. But the phone bill, nudging Rs 6,000 a month, began to pinch. The solution came from the faraway Scandinavian peninsula.

INTERVIEW:It is critical to be present in India, says Sigve Brekke

Those animated nightly conversations are now conducted on a connection from Uninor, a joint venture between Norway's largest telecom company Telenor and Gurgaon-based Unitech, which Tiwari took to go with the Airtel number he had been using for eight years. The two bills together are now below Rs 3,500 a month as the quality airtime with the girlfriend - all of it on the Uninor number - costs just about Rs 200 a month.

Click here to Enlarge
This has been made possible by Uninor's i gain-22 tariff plan. Under the prepaid plan - Uninor does not offer post-paid connections - Tiwari has to pay only Rs 6 for a five-hour call. He knows that Uninor's 22 licences were among the 122 spiked by the Supreme Court on February 2 in the 2G case, but is not too perturbed by it.

"As long as they (Uninor) are here, I can make the most of these offers."

Tiwari bought the Uninor subscription in January, one among 2.5 million to do so that month. If you think that number is high, wait till you hear the rest of it: Airtel and Vodafone, the runaway leaders, got only 1.3 million and 850,000 new subscribers, respectively.

What is more, January was not a flash in the pan. Uninor has been a subscriber magnet for months, getting more than any other service provider in three of the six months to February this year. In the other three, only Idea Cellular was marginally ahead. 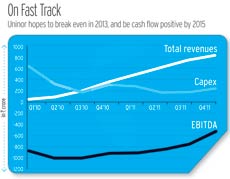 Click here to Enlarge
Among Indian consumers, whose value-seeking mindset is succinctly captured by a carmaker's commercial in which an army officer asks for the fuel efficiency of a battle tank, Tiwari is not unique. A salesman at Vishnu Pharmacy, in Chennai's Elliot's Beach area, which also sells mobile phone connections, says half of his buyers ask for Uninor, all for the same reason: its tariffs are 15 to 20 per cent lower than those of its rivals.

If the two-paise-a-minute plan resuscitated Tiwari's romance, the Rs 5-a-day scheme, the only one of its kind, has been the saviour of many who work on low daily wages. For that amount, it gives them unlimited talk-time till midnight.

For those who can afford slightly longer, and pricier, commitments and would like to avoid a daily recharge, there is the Rs 198 a month plan. It gives you 2,000 minutes of talk-time on the Uninor network and 700 minutes for calls made to others.

While these plans are quite generous, yet another is unique in that it disrupts the concept of inflation. For Rs 50, it gives you talk-time worth Rs 55.

"India as a market is growing on basic voice connectivity. People are not connecting on data services. And the size of the Indian mass market is so big that if you focus only on that you can build a market position. So if you are a guy who needs post-paid connections, we say no," says Sigve Brekke, who heads Uninor's operations for India and the rest of Asia, except Pakistan.

There have been enough people who have said yes to Uninor. Having acquired its first subscriber in December 2009, it now has 41.5 million of them, making it the sixth largest operator with a 6.26 per cent market share.

Airtel leads the pack with 27.22 per cent, having taken 17 years to garner its 178 million subscribers. Of the others who started alongside Uninor, and whose licences also stand cancelled, Videocon's Datacom has a 0.94 per cent share of the market, STel 0.52 per cent, Loop Telecom 0.5 per cent, and Etisalat DB 0.26 per cent.

Norwegian good
Brekke, since he took charge in November 2010, has come a long way, and that's not just about the physical distance from his home country. He was the one who forged the venture with Unitech, but then repaired to Bangkok, from where he kept a distant vigil on India. By May 2010, six months after the India operations started, they were still caught in the starting block. Subscriber additions were a trickle. 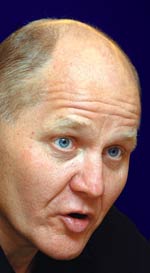 The size of the Indian mass market is so big that if you focus only on that you can build a market position: Sigve Brekke
Brekke had taken to politics at the age of 16 and rose to become Norway's Deputy Defence Minister by 33, but quit three years later to study and then joined Telenor in 1999. Now 52, he began to make frequent visits to India to understand the market, which he describes as "competitive", and took charge in November 2010. He had turned around debtridden Thai company DTAC, which Telenor had acquired in 2002, and the bosses in Oslo were convinced Brekke was the bloke for the job.

With 12 rivals to contend with, Brekke discontinued the post-paid schemes and focused on customers who the big boys might not find worth their time: those with low purchasing power. The intent was to get as many of them as possible by charging as little as possible, especially for local calls. His target customers did not care for the value-added services, including STD and ISD, and nor did Brekke. The tariffs in India were already at the proverbial rock bottom, a natural outcome of the stiff competition, but he created a new bottom.

With the masses as the new focus, Brekke came into his own. Reprising his politician days, he connected with them the way few other MNC bosses would have, including personally participating in road shows, which continue unabated despite the cancellation of licences.

Brekke was in Chennai last month, with 200 of his employees, all of whom converged on Elliot's Beach by car and motorcycle. It was like an election campaign, with Brekke seemingly canvassing for votes rather than subscriptions. In an impromptu gig, he took the dhol and danced to Tamil songs, including Kolaveri di, which was the subject of a recent case study by Business Today (www.businesstoday.in/kolaveri ).

Uninor, too, has the potential to make a case study in how to prise open a crowded market. But, unlike Kolaveri di's case study, Uninor's may not be about unmitigated success. It has not been easy to monetise those booming subscriber numbers.

Uninor's revenues grew nearly fivefold to Rs 2,787 crore in 2010/11, giving it 1.4 per cent share of the total industry revenue. Airtel, with four times more subscribers, earned 21 times more revenue at Rs 59,467 crore. India accounts for 30 per cent of Telenor's Asian subscriber base, but only 9.29 per cent of revenue.

"Telenor either does not care or does not know that it is destroying value with its willingness to price at or near a loss to gain market share," says Robin Bienenstock, Senior Analyst with London-based research firm Sanford C. Bernstein. "It will last as long as Telenor's board is willing to allow it to lose money."

Unfazed, Brekke says Uninor would be EBITDA-positive (earnings before interest, tax, depreciation and amortisation) by 2013 and have a positive cash flow two years after that. His optimism stems from the fact that though the Indian market is the most cut-throat, it also enables the most cost-cuts. It is now customary for telecom operators to outsource all non-core activities: from call centres to information technology systems.

This leaves Brekke free to focus on subscriber numbers, about which his Wipro-managed IT system sends a mobile alert every morning at 7.30. At 3 pm, he sits with his core team to decide on action in circles which did not do well the previous day.

This day-to-day focus on subscribers does not impress everyone. Says Harald Hornes Oyen, analyst at Oslo-based brokerage firm Swedbank First Securities: "Perhaps the more relevant issue for Telenor is whether the growth is profitable."

But neither a focus on growth nor one on profitability can address the two biggest issues facing Uninor. First, having sunk Rs 14,000 crore into the India operations, Uninor is about to lose its licences. And there is little clarity on the course of action.

The Supreme Court had given the government 120 days to re-auction the cancelled licences, but the government says it will need at least 400 days. Telenor, for its part, has added fuel to the fire by threatening to drag the government into arbitration under the Comprehensive Economic Co-operation Agreement with Singapore, the country through which its investments are routed.

Secondly, it is stuck with a partner it no longer wants and is looking for ways to oust Unitech, which has 32.75 per cent equity in the joint venture. Both have gone to the Company Law Board where a war of attrition is underway.

And then there is the third point to ponder. Even if Telenor gets a new partner - it is looking for one - and a new licence, can it afford to continue with its low-margin, high-volume model? Ulrich Rathe, European Telecom Equity Research analyst at brokerage firm Jefferies International, says the company probably hopes to convert its voice users into data users, which will expand the margin.

Now, if only that licence could come quickly.
TweetYoutube