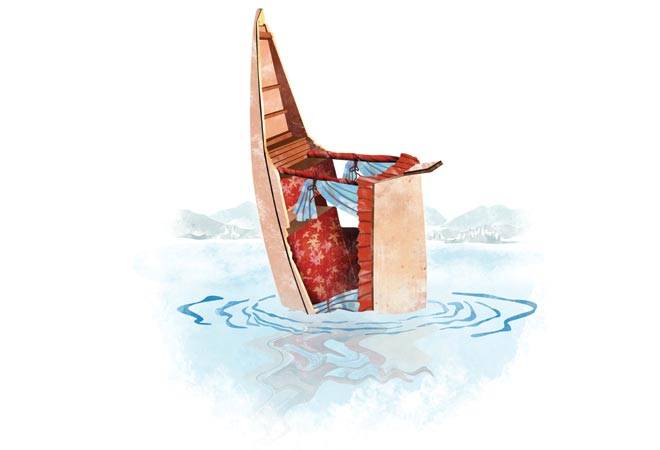 The Jammu and Kashmir government's late-February order, imposing curbs on wedding expenditure - on the number of guests that may be invited; on the number of dishes that may be served, and more - drew nationwide attention. What is less known, however, is that these restrictions are only a part of the many more steps that have been taken - or are under consideration - by the state to curb wasteful expenditure and boost public savings. The reason is the severe stress that the state's finances are in, mainly on account of its ever-rising debt. However, will these steps be adhered to? A similar guest-cum-menu control order was passed by the then J&K government in October 2004; it was set aside by the J&K High Court in June 2006.Again, in December 2009, the then Chief Minister, Omar Abdullah, had passed orders banning buying of new furniture and furnishings for government offices, unless these offices had been newly built. It was also laid down that no official dinners should be hosted except with the chief minister's approval, official travel curtailed as much as possible and video conferencing used instead, and no promotional exhibitions held at state government expense. But the directives were merrily flouted by many government departments.

The state is used to such austerity measures from time to time. This is because its finances are in a mess. The government's outstanding liabilities have risen three-fold from Rs18,591 crore in 2006/07 to Rs55,346 crore in 2015/16, with internal debt going up nearly four times from Rs8,766 crore to Rs30,452 crore. The government has been borrowing heavily from both national and international financial institutions. (See Deteriorating Situation.) No doubt the Gross State Domestic Product (GSDP) has risen as well, from Rs33,230 crore to Rs1,16,102 crore in the same period, but that is hardly any consolation. The projected GSDP for 2017/18 is Rs1,51,916 crore, but liabilities will be high as well, more so if the government implements the Seventh Pay Commis- sion's recommendations. Already J&K's liabilities are the highest among the special category states (See Worst Off), with the state repeatedly failing to keep its fiscal deficit within the limits set by the Fiscal Responsibility and Budgetary Management (FRBM) Act. (See No Fiscal Discipline.) In 2015/16, for instance, revenue receipts, including the Centre's grant-in-aid, amounted to Rs35,780 crore, while total expenditure was Rs45,750 crore. While the fiscal deficit for 2016/17 was pegged at Rs6,430 crore in the budget estimates, the revised estimate says it will be closer to Rs7,384 crore. The deficit for 2017/18 is estimated at Rs9,354 crore. In his budget speech in January this year, J&K Finance Minister Haseeb Drabu candidly admitted that the state had limited money - it could either raise government employees' salaries in accordance with the Seventh Pay Commission's recommendations or make permanent 61,000 ad hoc employees in different departments, but would not be able to do both. He, however, blamed previous governments for the precarious situation. "The debts are that of perpetuity," he said. "There are other states whose liabilities are higher."

The debts are, indeed, an accumulation of misguided policies and inefficient functioning. The situation in the power department is a telling example. While the national average power consumption per household is three units a day, in J&K, it is six units. This is purely due to power pilferage; transmission and distribution losses are close to 30 per cent. Every year, revenue from power turns out to be a third or a fourth of what is budgeted, even though the tariffs are among the lowest in the country. "People are not paying for the power they consume," says a senior official in the Power Development Depa- rtment. The state recently issued public bonds to raise funds to clear liabilities of Rs7,000 crore in the power sector. 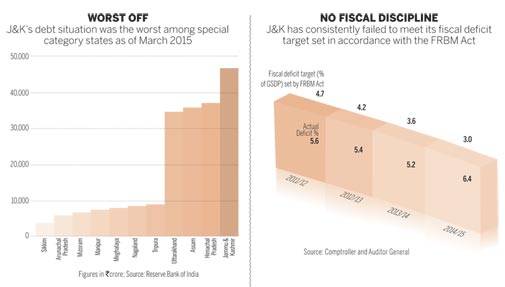 A number of decisions to reform the sector were taken but never implemented. In 2012, the J&K government decided to separate power transmission from distribution - create a transmission company, two distribution companies and a power trading company. But this is yet to be implemented. It also decided to disinvest some shares of its power generation company, Power Development Corporation, with an initial public offering, so as to raise funds to further tap the state's enormous hydel power potential. This, too, has not been done.

Similarly, the state's public sector units exemplify inefficiency - at least 12 of the 25 PSUs, employing in all 23,599 people, are in the red. Many PSUs have not finalised their accounts. In 2014/15, the J&K State Transport Corporation had suffered a loss of Rs57 crore, the J&K Industries Ltd Rs46.83 crore, and J&K Horticulture Produce and Marketing Corporation Rs10.62 crore. In 2015/16, J&K Cements Ltd reported a loss of Rs23 crore and J&K Handicrafts (Sales & Export) Corporation a loss Rs9.19 crore (see PSU White Elephants). "Other states have also incurred debts to fund development projects, but the expenditure policy of J&K is marked by gross fiscal indiscipline," says economist Nisar Ali, who has studied the state closely. "Even now, frivolous expenditure by ministers and bureaucrats on their accommodation, staff and vehicles has not stopped."

In addition, income from tax and non-tax revenue remains low, making borrowing inevitable. In 2017/18, borrowings are estimated at Rs10,537 crore. While the expenditure on collecting taxes has always been high, tax revenue increased only from Rs6,334 crore in 2014/15 to Rs7,326 crore in 2015/16. The Centre's grant-in-aid was 47 per cent of total receipts and 38 per cent of total expenditure in 2015/16. In 2017/18, tax receipts are expected to rise to Rs9,931 crore, non-tax revenue will be Rs5,308 crore, and share of Central taxes Rs9,711 crore. "The tax revenue is not increasing because the state does not have a strong industrial base," says Ali. Proposals to widen the base have been made but have come to nought. "About a decade ago, it was decided to tax some 22 services, such as legal services, health care and services provided by B. Ed. Colleges," adds Ali. "But a petition was filed against it. After that nothing has been done." The present People's Democratic Party-Bharatiya Janata Party alliance government maintains it is trying to bring about change. "We have issued orders that no frivolous expenses should be incurred," says Ajay Nanda, Minister of State for Finance, J&K. "Some of the liabilities inherited from the previous dispensation have also been cleared." But there are many recurring expenses - on salaries, for example - which simply cannot be curbed, but are bound to keep rising. At Rs36,420 crore, revenue expenditure in 2015/16 was 83 per cent of total expenditure, which is expected to rise to Rs42,568 crore in the revised budget estimate for 2016/17 and is projected at Rs48,819 crore in 2017/18. The reasons for the rise are increase in employee salaries, unauthorised appointments, power revenue deficit, interest liabilities and subsidies. The estimates for 2017/18 maintain 31 per cent of total expenditure will go into employees' salaries and another 12 per cent on power purchases.

As 2016/17 draws to a close, J&K's overall liabilities are higher than its total spending on salaries as well as development projects. Liabilities have increased nearly 200 per cent between 2006 and 2016. In an order announced on October 4 last year, J&K's Planning, Development and Monitoring Department directed that new developmental works should be proposed only when, after all allocations for ongoing projects had been made, sufficient funds were still available of up to at least 25 per cent of the capital cost. It specified that no additional funds would be provided even to implement commitments made by Chief Minister Mehbooba Mufti during her tours of the state. "The commitments made by the department and chief minister shall be accommodated within the capex allocation, for which there shall be no additional provision," the order read. The employment policy has laid down that all new appointments would be on contract, with those joining being absorbed in the permanent workforce only after seven years and only if their performance is satisfactory.

Services sector contributed 57 per cent to the state's GSDP in 2015/16, agriculture 15.89 per cent and industry, the remaining 27.11 per cent. There is urgent need for increased private investment, but given its financial condition, the state government is in no position to provide outside investors setting up industrial units any guarantees. "But the government can at least create a welcoming environment by reducing the hassles industrialists face in setting up units in Kashmir," says Ali. "There is a lot of scope for tourism projects in the private-public-partnership mode, as well for extracting mineral resources."

Overall, Ali despairs for J&K. "The pace at which debts are increasing is sure to make the state bankrupt," he says. "The liabilities will increase another 100 per cent in the next five to six years following which financial institutions may stop lending to the state. That would lead to a complete freeze on developmental activities and may even force the state to lay off employees."

A show of one-upmanship?