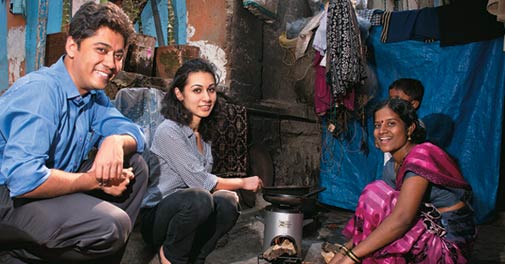 For over 4,000 children in  Mandya and Davangere districts of Karnataka, Hippocampus Learning Centres (HLCs) are a lifeline. Some 100 odd HLCs dot the village hamlets here. "I initially started with Hippocampus libraries for children, but realised the need for pre-school among the poor," says Umesh Malhotra, Co-founder and CEO, HLC.

What makes this venture unique is that it is not altruistic - Malhotra makes a profit on his investment despite targeting the poor. HLCs charge a fee of Rs 2,000 to Rs 3,000 per month per child, depending on the size of the village and the level at which the children there enroll.

"Barring five to 10 per cent, almost everyone in these villages is a BOP (bottom-of-the-pyramid) consumer," he says. "Most families have only one working member, usually employed in the town." Malhotra's initiative has attracted seed funding from several venture funds including Unitus, Acumen, Lok Capital, 40k Foundation and Asha for Education.

Far away in Hyderabad, Andhra Pradesh, Naveen Kumar has a similar story to tell. He is Founder and CEO, Sudiksha Knowledge Solutions, and is opening pre-schools for the urban poor. Sudiksha today runs 22 schools that charge Rs 400 per month. "We identify local women who have some formal education and train them to teach and manage the centres. We  pay them on par with market rates," he says.

Malhotra and Kumar are just two among a small but growing numbers of entrepreneurs who are reaching out to BOP consumers with for-profit business models. Indeed, a report by a team of researchers from IIT-Madras, India Venture Capital and Private Equity, 2013: Convergence of Patience, Purpose, and Profit, notes that investment activity in impact sectors - as those relating to social development or change are called - picked up after 2006.

Of course, mainstream companies have always sought ways to cater to the poor. There have also been start-ups as well focused on the BOP consumers. But today there is a greater diversity of ideas. "According to the Rockefeller Foundation, India is already the second largest impact investing market after the US," says Ankur Shah, Head of Sector Strategies and Education Portfolio - UAE  at global impact venture capital fund Acumen.

Several entrepreneurs now spot opportunities in the BOP category. "Why should investing in impact sectors not be commercially viable?" says Ronnie Screwvala in the report by the IIT-Madras team. Screwvala,  the Founder of the UTV Group (now called Disney UTV), is also a philanthropist. His for-profit investment vehicle, Unilazer Ventures, too invests in these sectors.

There are more instances. Take Neha Juneja and Ankit Mathur, both alumni of the Delhi College of Engineering. Their for-profit company, Greenway Grameen Infra, makes a cooking stove which needs 65 per cent less fuel than the traditional stove and also produces 70 per cent less smoke. It can use any type of solid bio-mass, including wood and cowdung, as fuel. "I do not think poor people want cheap products. They want good products that are value for money," says Juneja.

She notes that during the pilot stage, consumers rejected a cheaper stove in favour of the more efficient model. The company is already generating revenue and has attracted seed funding from an angel investor.

Or take Chaupal, which has launched health centres and a chalta phirta aspatal (mobile hospital) in Sonepat, Haryana. "We work on a dual model. The mobile hospitals are funded and are in the non-profit space, but we have for-profit, health centres as well," says Aloka Singh, founding board member of Chaupal. The for-profit clinics charge patients Rs 20 for a general check up and have different - though affordable - rates for other procedures.

"We hope to reach other districts in Haryana next through small, 20-bed hospitals," she says.

Acumen has been investing in India since 2002, with an active presence since 2006. "We have definitely seen a rise in social entrepreneurship as well as of investors supporting such ventures since then," says Shah. Its India portfolio grew from $2 million in 2005 to $24 million in 2010. In 2012, about 30 funds invested around $100 million on impact sectors in India. Some provide more than funds.

Start-ups attracting talent in droves from IITs and IIMs