On November 23, the man who founded and nurtured India's most high profile microfinance institution, or MFI, quit. Vikram Akula stepped down as SKS Microfinance's chairperson and board member. How did Akula, who earlier never seemed willing to give up control, leave?

Akula himself refuses to say a word. Many in the industry, however, claim they are not surprised, saying deep differences had developed between Akula and some members of the board and the management. The new non-executive chairman, P.H. Ravikumar denies it, insisting there were only "strategic differences", and these too arose after that watershed event in the history of microfinance in the country - the passing of a law by the Andhra Pradesh government in December 2010, severely restricting the activities of MFIs in the state.

MUST READ:I am still committed to microfinance, says Vikram Akula

The law, initially brought as an ordinance in October, was prompted by reports of coercive loan recoveries by some MFIs, which allegedly even led some debtors to commit suicide. It decreed that all MFIs working in the state would have to register themselves with multiple state government bodies, declare their interest rates upfront, stop seeking weekly repayments, and much more. While borrowers in Andhra Pradesh, which accounts for around one-third of the country's Rs 20,000-crore microfinance industry, assumed that paying back loans was no longer a priority, banks across the country took fright and curtailed lending to MFIs considerably.

2004/05:
Akula relocates to the US, appointing Sitaram Rao as CEO of the company

2005:
Changes SKS from a non-profit to a for-profi t company

2006:
Gets Rs 11 crore equity injection from Vinod Khosla and others. More funds follow

Oct 4, 2010:
SKS board terminates the services of then CEO Suresh Gurumani

Nov 23, 2011:
Akula steps down as the chairperson and board member. P.H. Ravikumar takes over

The result: large numbers of MFIs tumbled into red. SKS Microfinance, for instance, posted losses of Rs 384.54 crore in the July-September quarter against a profit of Rs 80.54 crore in the same quarter the previous year. It had launched a highly successful initial public offering, or IPO, in July 2010 and listed a month later, but the share price, around Rs 785 last December, has now touched a 52-week low of Rs 90.20.

"The Andhra Pradesh Act very clearly brought out the risk of being a single product company," says Ravikumar. "SKS will no more be only an MFI but will look to offer a range of rural financial services" to get back on track. Indeed, several other MFIs have been trying to diversify in the last year. See Desperately Seeking Revival, BT, Oct 30,

Some industry insiders have welcomed Akula's departure. "Akula's resignation is welcome as he stood for the 'for-profit' model of microfinance, which in many ways has led to the destruction of the reputation of MFIs in India," says David S. Gibbons, the Canada-born founder and Chairman of leading microfinance entity, Cashpor India. "Great damage has been done to the sector and the poor by the crisis in Andhra Pradesh, for which both profit-maximising MFIs like SKS and the state government have to share the blame." Others felt, given SKS Microfinance's current situation and erosion in share value, Akula was rightly held accountable. 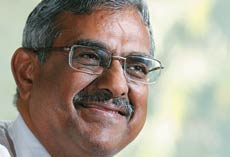 'I won't paint a rosy picture'

Puranam Hayagreeva Ravikumar, 60, the new non-Executive Chairman-Interim of SKS Microfinance, has 37 years of experience in financial services behind him. He spoke to E.Kumar Sharma a day after he took charge. Edited excerpts:

How do you plan to revive SKS Microfinance?
We are moving to financial inclusion, of which microfinance will be an important sub-segment. Look at it like, say, HDFC Bank, which has retail banking, corporate banking, treasury and other services. Or take ICICI. It has ICICI Life, general insurance, securities and the bank. It is a structure where there are different vehicles but the brand is the same.

How soon will you have the new structure?
We will arrive at a strategic business plan in four to six months and will see its roll-out in the next financial year.

What is the situation now in Andhra Pradesh?
We have some recoveries of about 10 to 11 per cent. But clearly, we need to find a solution to that (the problem of poor recoveries) in the next 18 months. That means a hit of close to Rs 1,000 crore if you make the provisions? You could say about Rs 800 crore. But we will not give it up.

What about Vikram Akula?
Till March, he will continue to help us because all said and done he founded and grew the company.

One year from now, how do you see SKS?
I won't paint a very rosy picture but the balance sheet of SKS will start looking healthy.

Where do you think things went wrong at SKS?
We probably underestimated the negative reaction and probably did not handle it well. In India, the value system is generally such that if you are working in customer segments like that of SKS Microfinance, you expect people to be not paid well. They are expected to draw only moderate salaries. But if I want the best people I cannot pay them moderate salaries and that is the reality. It is the same with the view on our making profits.
No doubt, under Akula, SKS Microfinance grew rapidly, at one stage approving 100,000 loans a week. But some maintain this set a dangerous example. "The SKS IPO and its aggressive growth preceding this attracted others to follow suit and laid the foundation of the present crisis," says Sanjay Sinha, Managing Director, Micro-Credit Ratings International, an agency that rates MFIs. Still others believe the draconian law alone cannot be blamed. There were problems with the way SKS Microfinance was run. "One cannot discount internal governance issues," says M.S. Sriram, adjunct professor at Indian Institute of Management, Ahmedabad.

"There was a promise made when the IPO was launched that an advisory board headed by Infosys Chairman Emeritus N.R. Narayana Murthy would be set up. What happened to it? Now both the public faces of the IPO (former CEO and managing director Suresh Gurumani and Akula) are out."

While companies in other sectors are lauded for doing so, an MFI wooing private investors and seeking aggressive growth - as SKS Microfinance under Akula did - soon starts to face an image problem. "There is something odious about wealthy private investors and MFI staff making money from the poor, many of whom do not have a stick of furniture in their rooms and live under leaking roofs," says Gibbons. Akula, he feels, "was right in believing that the poor are bankable, but wrong to think private investors are needed to reach them".

With Akula's departure, SKS Microfinance is ready to launch itself headlong into its new strategy, offering small housing loans and other fee-based services alongside microfinance. Sinha sees this as a reflection of the compulsions of being a listed entity. "Being a listed entity SKS is forced to look at maximising shareholder value. This is not just a case of mission drift but one of a mission change. It is seeking to move from being a microfinance specialist to a regular non-banking finance company," says Sinha.