Fitness as a service, or Faas, is what Vishal Gondal banks on in his new venture, GOQii. Is he ahead of his time?
Arpita Mukherjee | Print Edition: February 15, 2015 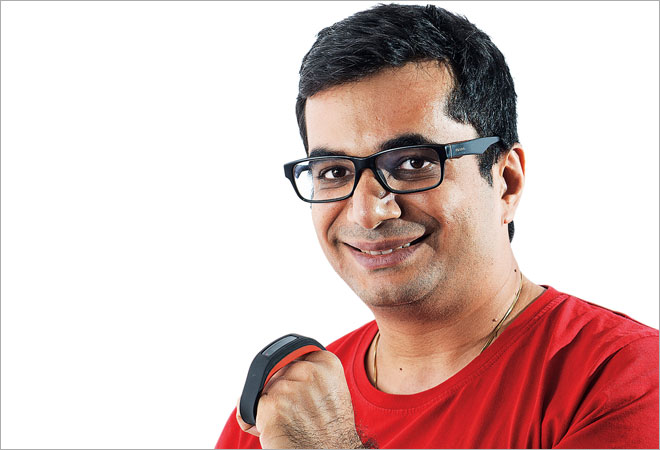 Finally, Sandeep Chaudhary gave up and got married without attaining his vision of himself as a leaner man without a paunch. Not for a lack of intent.

Chaudhary, a 28-year-old engineer, took a gym membership for a year and had a few meetings with a dietician. Why he even tried a fitness device to propel himself. But his work schedule - long hours and frequent travel - came in the way. He could draw solace from the fact that his bride, who was on a fitness drive herself, did not quite look supermodel-thin on December 14 last year, the day of their wedding.

"I got a lot of data from the device, but I did not know how exactly to use that data," says Chaudhary. But he does wonder what might have been if there was a voice, more firm and less forgiving than his own conscience, to goad him on.

To all those who share Chaudhary's angst, Vishal Gondal has the answer. Gondal had set up IndiaGames at the age of 16 and sold it to Walt Disney in 2011. He has now started GOQii, pronounced go-key, which provides you with that voice: encouraging, counselling, at times almost reprimanding.

The wellness industry in India is estimated to touch Rs 1,00,000 crore by 2015, according to a 2012 report by FICCI-PwC. Look around at the mushrooming of gymnasiums and nutrition supplement stores in your locality, and you can imagine that the figure may be higher than that.

Clearly, Indians, just like human beings around the world, want to get fit. Entrepreneurs are, therefore, jumping in to help them along the way, many of them wielding wearable devices. Globally, there is Fitbit, Jawbone, Garmin, and even Nike which sells FuelBand to measure body movement. Fitness-tracking companies are mushrooming in India, too - Bangalore-based GetActive, for instance, also sells bands. The worldwide wearable electronic fitness devices shipments are expected to rise to 91.3 million units by 2016, from 73 million in 2013, according to Gartner.

THE ROAD TO FITNESS

How GOQii works to help customers achieve their health goals GOQii, though, is not just a devices company. It also provides services, just like Apple. Gondal is selling a subscription plan. "We don't charge for the device, we charge for the service and the relation with the mentor." You can get that for three months by paying Rs 3,999, six months for Rs 6,999, and 12 months for Rs 11,999.

The company claims to be the only one in the business to combine service with the device. The device, a band, is worn around the wrist, like a watch. It collects data such as steps taken and distance walked. It also tracks calories burned and sleep patterns. The data generated is fed into an app that a personal fitness coach can analyse.

The coaches help you set goals. They stay in touch through the app and make suggestions. They send you a virtual hi5 when you do well. The coaches, in turn, are helped by a bunch of expert "habit designers". By the middle of 2015, Gondal says, the company will have a few thousand trainers on its platform.

And it is embracing the competition rather than fighting it. "We will announce our integration with other hardware and you could use your GOQii with your Jawbone, Fitbit, Google watch, and the Apple watch."

The Voice in Your Band

The idea of GOQii arises out of personal experience. Just as Phanindra Sama thought of setting up redBus when he could not get bus tickets from Bangalore to Hyderabad for the Diwali holidays of 2005, Gondal thought of a service during his own struggles to get back to fitness.

His appearance, with well-concealed six-pack abs, may throw you off track, but Gondal is a regular marathon runner. It took a lot of effort, though, to regain this level of stamina and fitness after years of long working hours and irregular eating during years of being an entrepreneur.

A national-level volleyball player in his younger days, Gondal never came to terms with his lack of fitness and put himself through an unforgiving regimen with the help of a trainer who guided him regularly through WhatsApp.

Why WhatsApp, thought Gondal, and set up GOQii.

Experts say more than 80 per cent of people quit fitness efforts within a couple of months. Mostly that is because a fitness regime can be lonely pursuit. Gondal believes he will be able to overcome this two-month barrier. "People have bought treadmills and are now drying clothes on them," he says. "Most people know what to do. The problem is that they lack the motivation."

GOQii is available on most smartphones on Android, Windows' Lumia, as well as Apple's iOS. A recent tie-up with Windows makes its band available with certain devices to customers in Mumbai, Pune and Ahmedabad, along with a subscription for three months. Gondal plans to go in for more such tie-ups.

To Each Her Own

His service is, indeed, unique, says James Moar, analyst with Juniper Research. "There are other players who offer coaching and data via algorithms and benchmarking, but charges for this (Fitbit Premium, for instance) are supplementary to the initial cost of the hardware, not bundled with it." Kiran Kumar, research manager-Client Devices, IDC
There are other start-ups that provide fitness coaching, albeit without a device. One of them is Stepathlon. Founded in 2012, it ties up with companies and organises a mass fitness race, lasting about 100 days, between employees of an organisation as well as between organisations. Its cornerstone is a pedometer that shares the number of steps taken by the participants and helps Stepathlon set targets with an interactive interface, over the phone or on the website, to motivate the participants to become more active.

"We are trying to get people to do stuff long enough to make it a habit. Once it becomes habitual, you have won a part of the battle because an average person is not motivated enough to go for a run every day," says Ravi Krishnan, co-founder and CEO of Stepathlon. "We engage and give people the opportunity to use (the device), else our wearable, too, would end up in the drawer."

"We see that the people we're still talking about are enthusiasts and early adopters. As we speak, these devices have a long way to catch up"

TheWeightMonitor.com, founded by Ishi Khosla, a clinical nutritionist and consultant, is a website and a mobile application that reaches customers in 120 cities worldwide. The service provides customised instructions and ready scores to the customer.

The marketplace model, which is GOQii's model, has willing-takers. But no one has been able to monetise it, according to Niti Desai, who has been a nutritionist for 15 years. "Some companies did approach us? But it didn't work because of the timings of the two professionals. There is so much back and forth." According to Desai, the old system works better. "If you've taken an appointment, you will try to keep it."

Going Beyond the Serious

The challenge for anyone looking to profit from fitness is to push it beyond the realm of the ailing and the enthusiast. "Right now it's restricted to serious sports enthusiasts or people who want to be in that space and have the ability to afford such devices," says Ankur Bisen of Technopak Advisors.

In theory, the thought of a coach available at all times is appealing. But experts say that enthusiasts who look for achieving a specific aim, say to run a marathon, will be able to work with standalone devices, such as Nike's FuelBand, Fitbit, Jawbone, and the like. For the self-motivated, the data on the devices will be enough, no coaching will be necessary.

"We see that the people we're still talking about are enthusiasts and early adopters. As we speak, these devices have a long way to catch up," says Kiran Kumar, Research Manager-Client Devices, IDC.

Then there are gyms, which like to call themselves fitness centres. They have their own appeal of person-to-person connect and an ambience in which you get motivated by watching those around you sweat, swagger, and strut.

Amit Sawant, National Head of Marketing and Communications at Talwalkars Better Value Fitness Limited, says the company organises events such as "the biggest loser" to keep people engaged. "Retaining a customer is more beneficial than hunting for new ones because the catchment is limited," he says.

Debashish Biswas of Fitness First says centres like his have to get more innovative to make exercise more fun, which can be done better if the trainer and trainee are present at the same place. "There could be issues where people need immediate attention or the programme needs to be revised? such a thing [in case of virtual coaches] could be a disaster, because the trainer is not with you."

Ahead of Its Time? 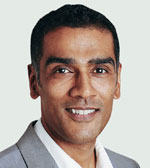 Ravi Krishnan, Co-start-ups GOQii Co founder and CEO, Stepathlon
Biswas and his ilk, however, have to contend with the irrepressible surge of wearable devices, which lend themselves easily as fitness aides. Gartner predicts that by 2016 smart watches will constitute about 40 per cent of wearable devices for the wrist. Seven out of the top 10 smartphone vendors have either already entered the space or are about to. A year ago, there were two.

"We engage and give people the opportunity to use (the device), else our wearable, too, would end up in the drawer"

This would not hurt GOQii's business, since Gondal plans to be on most smart devices. "The device is irrelevant, whether you use a GOQii or a Nike, or an Apple device, all the data will go into the GOQii platform," says Deepak I. Shahdadpuri, the Singapore-based Managing Director of DSG Consumer Partners and Beacon India Private Equity Fund, who has invested in the start-up.

But is the market ready for GOQii?

Delhi-based freelance Fitness Instructor Manisha Singh, who has been in the industry for 11 years, says that though there is a market for fitness today, it is still much smaller than it is in the US or UK. "It will take time to grow, say three to four years."

Also, about a fourth of fitness devices will be sold through non-retail channels starting between 2018 and 2020, notes a recent Gartner report. "During this time scale, smart wristbands and other fitness monitors will be offered increasingly by gyms, wellness providers, insurance providers, weight-loss clinics or employers, sometimes at subsidised prices or for free," says the report.

This is exactly what GOQii is working towards. However, issues will arise as it reaches more and more people and enters the international market, which it plans to.

Juniper's Moar says GOQii will find it increasingly difficult to offer the same quality of service to all customers. The software may also become an issue while dealing with international or multilingual markets.

"With the hardware being commoditised, software must be the focus of the overall offering," says Moar. "Firms need to be ready to be able to process user data in large volumes, although with initiatives like Google Fit and Apple Health storing data on the devices themselves, it is becoming less of a problem of storage and more of how to produce a differentiated product."

To Sanjay Parthasarathy, CEO & founder of Indix, an investor in GOQii, whatever Gondal does will be interesting and productive. "The question now to me is whether he can execute to the point where it goes from being a validated concept to a super successful product."

Meanwhile, Sandeep Chaudhary, just back from his honeymoon, has found an ally in his wife Tanu. "We motivate each other to at least get the diet bit right." For now at least, they are not missing a third voice.

Open Garden's FireChat app can be a mobile megaphone