The British telecom giant gets ready to play the Indian telecom market on its own terms and under its own name. 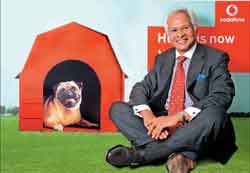 Asim Ghosh, MD, Vodafone Essar
We are going to paint the town red,” a visibly excited Sarin told the media after the Vodafone Essar board meeting. It was less than a day since the Hutch brand name had made way for the now ubiquitous red Vodafone logo. This effectively concluded the process of Vodafone acquiring a 52 per cent stake in Hutchison Essar—now renamed Vodafone Essar—for $10.9 billion, making it by far the biggest telecom M&A deal involving India.

The brand transition too, which was the final touch to the entire process, was anything but easy. It was across a subscriber base of 35 million and at over 400,000 outlets. “That apart, it was across 10,000 employees and over 40,000 partners. It has been the largestever exercise in the Indian telecom market and probably among the largest-ever in the world,” says Vodafone Essar’s Managing Director, Asim Ghosh. While nobody is talking numbers, it is estimated that the media spend for the exercise was well in excess of Rs 300 crore!

What’s in it for Consumers? On the face of it, the advertising blitzkrieg is all about the change in brand name to Vodafone. “We will incorporate key elements like having an emotional connect with the customer and a big focus on value-added services (VAS),” says Ghosh. If Hutch brought a slew of services for the customer, Vodafone will almost certainly go one step farther and Ghosh is quickto admit that. “Vodafone has a global scale of operations, which means it has a huge access to products, knowledge base and handsets,” he says.

Interestingly, Vodafone, in many countries, is known to bundle handset offerings with its own cellular services. Sarin has spoken of this several times in the past and has tied-up with Chinese handset maker ZTE. This will be a lowcost handset targeted primarily at the rural markets. “It is quite common for Vodafone to do bundling in a country like the UK. No GSM player does that in India,” observes Romal Shetty, Executive Director (Telecom), KPMG.

Given that the Hutch brand name enjoyed high levels of recall, it was not easy to drop the name completely. According to Ghosh, the traditional Vodafone strategy has been to use the Vodafone brand name with that of the local partner. “If that had been the case here, it would have been wastage of scale and we would have spent twice as much money. Besides, it was not necessary in this market,” he rationalises. The pug has remained and the tagline merely says, “Hutch is now Vodafone.” Adds Sarin: “Consumers can look forward to great innovations from Vodafone.” The company has already outlined an investment of $2 billion for its expansion plans in India.

The key will remain in speed of execution. This is a telecom market where tariffs are rock-bottom and the consumer is spoilt for choice. As things stand, Vodafone will look to bring in its suite of offerings. According to Shetty, there are two challenges that Vodafone Essar will have to face. “They have to get in the consumers from the Tier 2 cities. Hutch has been a high-class brand and it is important for the consumers in these markets to relate to Vodafone,” he thinks. The other challenge, points out Shetty, will be to get in the data services quickly. “They have to introduce this before a player like Airtel, which has already had a headstart with the launch of the BlackBerry,” he adds. Among Vodafone’s key offerings globally are Vodafone Live and Vodafone Mobile Connect. Vodafone Live, which is available on Vodafone’s 3G network, provides high quality content and communication services, which include music videos, sports highlights and movie trailers apart from music downloads. Vodafone Mobile Connect, on the other hand, offers data cards that provide high-speed data connections. This targets the corporate clientele with specialised offerings.

India could well become one of Vodafone’s key markets. With most of its other markets heavily saturated and with an absolutely minimal presence in Asia—it has a 3.3 per cent stake in China Mobile and it sold its 97.68 per cent stake in Vodafone Japan to Softbank Corporation last year—the importance of India can hardly be overstated. The increase in subscriber numbers in India tells the story—5.4 million net additions in April this year, 6.82 million in May, 7.61 million in June, 8.05 million in July and 8.31 million in August. The number of wireless subscribers crossed 200 million in August and there seems to be some distance to travel. 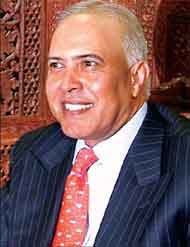 “We have forecast the Indian wireless subscriber base to reach 254.9 million by March 2008, implying a monthly net addition runrate of 7.66 million subscribers in the remaining seven months of FY08,” says a report by Macquarie Securities. For Vodafone, it will have to deal with a market that is heavily pre-paid tilted—at the net additions level, pre-paid users account for 80 per cent on a monthon-month basis while the proportion is at around 70 per cent at any given time—where the Average Revenue Per User (ARPU) has been falling. From a level of Rs 438.29 for the July-September quarter of 2005, the ARPU for Vodafone Essar stood at Rs 315.81 for the January-March quarter of 2007. That has been the story for all operators, as pre-paid users generally do not spend very much.

For Vodafone, it seems like a case where it has to protect market share in key markets and at thesame consolidate further in India. This is at a time when its own financials have not been looking too good. For FY07, Vodafone’s revenues stood at £31.1 billion (Rs 2,50,770 crore) with a loss of £5.29 billion (Rs 42,570 crore). The loss figure for FY06 was much higher at £21.82 billion. India is key, since it already has a high subscriber base with penetration levels still at encouragingly low levels—it is less than 17 per cent.

Spectrum is another key issue that could be a bit of a dampener for Vodafone Essar. With all large operators, including Vodafone Essar, upbeat on their 3G plans, this issue needs to be addressed with a bit of urgency. Sarin himself is candid when he says that spectrum is the lifeblood of the telecom business. “We are looking to get spectrum and we are looking forward to discussing these matters with relevant agencies,” he told BT. By all indications, the spectrum issue will be discussed at length, but an early resolution seems still a while away.

For Vodafone Essar, the way forward looks interesting even as it will need to execute its plans quickly. “Over the next five years, we will have a tremendous focus on our fundamental expansion,” says Ghosh. Meanwhile, Vodafone, on its own, acquired a 10 per cent stake—through a combination of direct and indirect holding—in Bharti Airtel in late 2005 for $1.5 billion. Early this year, Vodafone sold 5.6 per cent of this stake to the Bharti Group for $1.6 billion. It’s not clear what Vodafone intends to do with its balance stake. A statement from Bharti earlier this year merely said: “Vodafone will continue to hold an indirect 4.4 per cent economic interest in Bharti Airtel as a financial investor and will not have any representation on its board nor any management rights.” Without doubt, Vodafone’s focus will be on Vodafone Essar and to ensure that the Indian operations become a large part of its global assets. Other decisions till then may just have to wait.