By judiciously growing markets, nibbling away at shares, creating new growth engines and going international, Marico has been able to do something few FMCG companies have been able to pull off—21 per cent cumulative average growth over the last five years. BT'sT.V. Mahalingam tells us the success story.

Regular walkers at the windswept Bandra promenade in Mumbai are likely to spot a professorial-looking man walking briskly past entwined couples and sleepy constables, barely throwing them a glance. Only an avid follower of business magazines or the burgeoning business news channels would recognise 57-yearold Harsh Mariwala, Chairman, Marico, one of India’s fastestgrowing marketers of fast moving consumer goods (FMCGs). 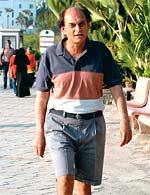 Harsh Mariwala
Mariwala follows a rigorous physical regimen that sees him hit the treadmill, take long walks on the sea face, and play golf whenever he can find the time. It’s, therefore, no surprise that Mariwala is tough to keep up with when he is walking.But then, so is it with the company that he heads. As the financial results for 2007-08, which were declared last fortnight, reveal, Marico has clocked group revenues of Rs 1,907 crore—up 22 per cent over the previous financial year.

Since 2003-04, revenues have grown at a compounded annual rate of 21 per cent, something few FMCG marketers can match. Net profits are up 30 per cent for the same period. To cap an impressive run, look at it this way: The group has experienced 30 consecutive quarters of revenue growth and 34 quarters of profit growth. 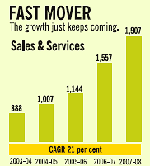 But even that’s not enough for Mariwala. “We want to be the fastest-growing FMCG company. And we want to do that consistently. There is no point in growing one year at 30-40 per cent and the next year at zero,” says Mariwala.

To get that consistent high growth, Marico has a hand of four good cards. The first is a portfolio of established businesses and brands (businesses like hair oils and edible oils, and brands like Parachute and Saffola); the second card is the hunger to create new business models, the Kaya Skin Clinics being just one example of this; third, the international operations have grown from strength to strength.

Finally, the company has a distinct style of doing things, be it product innovations or the acquisition strategy.

And then, of course, there is the story of Marico’s transformation from being a pure oils player to one focussed on health and wellness. Like Mariwala says: “Overall, I would classify the change that we are going through in four different buckets. Transition from hair oils to value-added FMCG products; from a purely Indian firm to a global entity; from low value to high value-added products, and from being only in the products space to becoming a solutions player (by taking the services route with skincare).” Saugata Gupta
Oil is clearly Marico’s base. Despite stiff competition from the likes of Dabur and Emami, Marico has been able to increase its share of business in coconut oil and edible oils. Overall, Marico has a market share of 56 per cent in the coconut oil category with Parachute, Nihar, and Oil of Malabar. Parachute’s market share for the last year is about 48 per cent in volume terms.

Along with the traditional, Marico is constantly pushing the envelope towards new businesses. Late last year, the company prototyped a diabetes management atta mix in Delhi and the NCR. With this prototype and the cholesterol management product that it introduced the year before that, Marico has signalled its intentions to enter the functional foods markets, which, though still nascent in India, are expected to grow rapidly. Milind Sarwate
Explains Saugata Gupta, CEO, Consumer Products Business: “One of the reasons why FMCG companies in general have had growth issues is that they have a single source of revenue—just a plain product model. Take the case of a company in soaps and detergents. Just because disposable incomes are going up does not mean that people are going to start bathing more.

Therefore, we have to look at a product-plus model.” Sure enough, in December 2007, the company launched the Parachute Advansed Starz range of products, including a shampoo, gel and a non-sticky hair oil targeted at kids.

Another ace in Marico’s pack is its successful entry into the services play, with the Kaya clinics. Since starting its first clinic in 2002 in Mumbai, the company has come a long way. “On the first day we launched our clinic in 2002, not a single customer came. The second day, a customer walked in and then signed on our register saying that we are a thousand times better than a competitor. Then we knew that things would work out,” recalls Kaya CEO Rakesh Pandey, an engineer by qualification who can wax eloquent on peels, skin renewal and polishing systems.

Kaya opened 18 new skincare clinics in 2007-08, taking the total number of Kaya Skin Clinics to 65. Of these, 56 are spread across 18 cities in India, while nine are in West Asia. In typical Marico style, Kaya also extended its offerings by getting into the weight-loss space, opening three Kaya Life Clinics in 2007-08.

During the year, Kaya clocked revenues of Rs 100 crore. But more than its increasing contribution to group revenues, Kaya holds the promise of boosting the company’s bottom lines, thanks to its distinct service model. Typically, kickstarting a Kaya clinic takes Rs 1-1.3 crore (including technology investments and interiors) in a metro city. The clinic breaks even in about nine months in a metro and takes a little bit longer in smaller cities. Given that Kaya is still in expansion mode, significant margin accrual may not happen in the near future, but nevertheless, it’s a significant engine for the group’s growth. 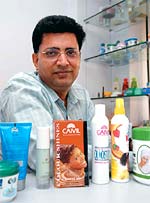 Vijay Subramaniam
To boost its product revenue stream, Kaya began prototyping its “shop-in-shop” model through kiosks at malls. “We are now present in about 36 locations like Shoppers’ Stop, Hypercity and Lifestyle. We are looking at 100-plus such outlets in the future,” says Pandey. Currently, 12-14 per cent of Kaya’s revenues come from products. “Kaya has already turned around but its effects on margins will start kicking in later. But it’s still in an investment phase. After hitting break even, margin accrual will happen faster and better,” says Vinod Kamath, CFO, Marico.

Another significant aspect of the Marico story has been its rapidly growing international business and its string of international acquisitions. Marico Chief for HR & Strategy Milind Sarwate narrates an interesting story about the company’s way of doing business. Even as Marico was negotiating its first acquisition in Egypt for the haircare brand Fiancée from the Egyptbased Ready group, the company appointed a country head.

“We had the audacity to appoint the country head for Egypt even as the negotiations were going on. The guy (Brajesh Bajpai from Frito Lay) had the audacity to join as Country Head with nothing on the ground, when acquisition papers were yet to be signed,” recalls Sarwate, who has worked on most of the company’s acquisitions. 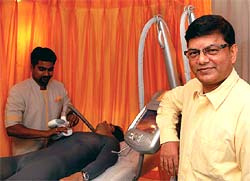 Rakesh Pandey
With twin acquisitions in Egypt and a recent acquisition in South Africa, Marico is well set to tap the booming markets for beauty care products in Africa and West Asia. Marico has also been very astute in picking its acquisition targets. For example, last November Marico entered South Africa, but not in a conventional, mass category. It chose to enter the fast-growing South African ethnic haircare and healthcare market through the acquisition of Enaleni Pharmaceuticals’ consumer division. The market for ethnic hair care and related products in South Africa is estimated at Rs 600 crore. In 2007-08, Marico clocked a turnover of Rs 20 crore in South Africa.

“We expect to capitalise on the rapidly growing ethnic hair care market driven by the Black Economic Empowerment (BEE) policy in South Africa. South Africa and Egypt are our gateways to that region,” says Vijay Subramaniam, CEO, International Business, Marico.

The company’s Egyptian brands Fiancée and HairCode added nearly Rs 88 crore to the turnover. So, what does the future hold for Marico? “We don’t want one growth engine. We want all the product categories to grow. All products have to deliver at least double-digit growth,” says Mariwala. Keeping up with him will then get even tougher.