The power of one

Some months ago, Sumita Rajput, a Gurgaon-based communications professional, was looking for casual shoes of a particular design. She could not find a pair in any of the shops she visited. Then a friend suggested she try bestylish.com, an online retail outlet devoted exclusively to shoes. Sure enough, what she sought was available. She made a second purchase soon after. "Not only do I get shoes cheaper, I also save time and effort by shopping online," she says.

The online retail market in India is currently at around Rs 2,000 crore, according to an estimate by the Associated Chambers of Commerce and Industry in India (Assocham). No doubt, the best known online retailers are those such as flipkart.com and Yebhi.com, which, starting with a single product - flipkart with books, yebhi with shoes - have gone on to add many more items to their repertoire. But there are also those which have stuck to a single product line, while offering greater range and depth in that product than the general retailers do.

Babeezworld.com and firstcry.com, for instance, both specialise in baby products. Zivame.com provides just lingerie, healthkart.com offers a variety of health-related products from special foods to adult diapers. Gkboptical.com sells eyewear. "No point in confusing the consumer by offering a range of products," says Shailen Amin, CEO of bestylish.com. "I would rather focus on what we are good at."

He outlines the disadvantages of trying to please all. "More product segments mean more people for analysis, for deciding the inventory, and more space needed to stock the stuff," he adds. "There is even a fight for products to feature on the website's main page." Again, niche retailing provides an opportunity for personalised service. "When a woman buys diapers, we know she has an infant and is likely to need more," says Amurto Basuray, MD of Olive Tree Retail Ltd, which runs babeezworld. "Most times we contact her before she places her next order. We know when she will need a bigger size for her growing baby, and make suggestions accordingly."

Niche players have two kinds of clientele. "In the cities, they provide convenience and value, while in the small towns they provide availability," says Raghav Gupta, Principal at investment firm Booz and Co. Increasingly, a substantial part of these websites' patrons come from Tier-II and Tier-III cities, where many now have the purchasing power to afford the best, but often cannot find shops in their area selling premium products and brands. "We see a lot of high value electronic items being bought from smaller cities," says Arindam Bose, MD and Chief Customer Officer, timtara. Amin of bestylish says half his orders come from the smaller cities. As for items like lingerie, many small town folk prefer buying online rather than at a store. "The social discomfort associated with buying lingerie magnifies as you go to smaller towns," says Richa Kar, co-founder and CEO of Zivame. "Our growth in the smaller towns has been phenomenal." 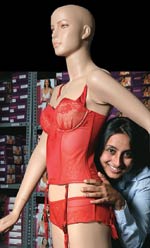 The social discomfort associated with buying lingerie magnifi es as you go to smaller towns: Richa Kar
Other niche website owners echo her optimism. "Initially we had many people returning shoes, but now the rate is down to 10 per cent, and falling," says Amin of bestylish. "That is because we have ensured all measures are standard, which was not easy given the large number of private labels." Again, despite entering near-virgin territory - hardly anyone had sold spectacles online before - gkboptical expects revenues of around Rs 10 crore in its first year. "The experience is similar to that in a store," says Dhruv Gupta, its CEO. "You select your frame and provide your prescription; the lenses are manufactured and your spectacles sent to you."

But how profitable are these specialised sites? Most of them started less than two years ago - firstcry in December 2010, zivame in August 2011, babeezworld in October 2011 - and their founders are reluctant to discuss bottom lines in detail. Bose says timtara's monthly sales are around Rs 4 to 5 crore, Kar says zivame clocked 300,000 users in its first six months. "It is too early to look at profitability," says Gupta of Booz. "What is important is to see if they are generating revenue and if the revenue is growing."

Low Internet penetration is the biggest hurdle: while in Britain, 10 per cent of all shopping is done online, and in the US four per cent, in India the corresponding figure is only 0.5 per cent. Acquiring new customers takes a considerable amount of money and effort (see Hurdles). "The cash burn for most of the new websites is very high," says Basuray of babeezworld. "We'll have to wait and see how many are able to sustain."

The flip side of low penetration, of course, is that there is plenty of room for growth. The Assocham study predicts online retail in India will rise to Rs 7,000 crore by 2015. "Currently very few people in India are buying online and hence the market remains to be tapped," says Akhilesh Tuteja, Partner and Head of IT Advisory at KPMG. "Online commerce is a good investment option."

Not surprisingly, venture capitalist firms are upbeat: already, Mangrove Capital and SpringStar have invested in bestylish, IDG Ventures and Indo-US Venture Partners in zivame, Sequoia Capital, Omidyar Network and Kay Capital in healthkart, SAIF Partners and IDG Ventures in firstcry. "The bullish view of the venture industry is driven by the optimism that Indian consumers will adopt online as a preferred route for shopping products," says Ankur Bisen, Associate Director, Retail, Technopak Advisors. Booz's Gupta agrees: "As more shoppers get used to a particular website, the number of repeat customers will grow. Customer acquisition costs will fall."

In their bid to achieve scale, niche websites are moving in two different directions. "Firstcry was so successful that we have launched another specialised website - Goodlife.com for personal care products," says Amitava Saha, its co-founder. On the other hand, timtara has followed the flipkart path, moving from one item to several: it now also sells lifestyle and personal care items. "Initially, we focused only on electronics, but after market research and customer feedback we introduced other categories too," says Bose, its MD.