On Their Own Feet

Why some entrepreneurs delay or even turn down VC funding for their start-ups. 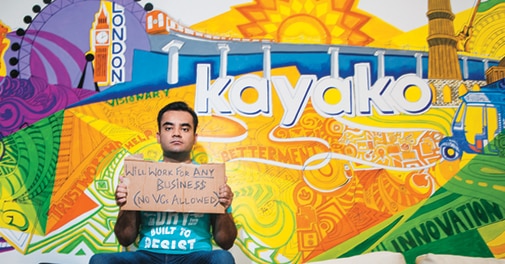 "I would have grown faster with VC funding, but i would have made mistakes", says Varun Shoor, Founder/CEO, Kayako. (Seen here at Kayako's Gurgaon office. Photo: Vivan Mehra)

Varun Shoor built Kayako, an online help desk software company, from scratch. The 30-year-old from Jalandhar launched his business in 2001 - with no external funding -while still in high school. Denied seed capital from his father, Shoor started out with an about-to-expire domain name 'Kayako' from an Internet chat room, web-hosting from a friend's company and a payment gateway service from 2Checkout.com, a start-up then. The timing was perfect. The modes of customer contact with companies were still evolving and there was a growing demand for customer support software.

Shoor depended on revenues from customers to gradually scale up his business. Kayako's business gained heft slowly but surely. Fast forward to 2014. Kayako is a multi-million dollar business. It works with close to 35,000 customers across the globe, from the US and Europe to Afghanistan, Brazil and Africa. Its roster of customers includes NASA, MTV, Georgetown University, Kraft Foods and Pearson.

"Depending only on customer generated cash meant things moved really slowly, even moving to a formal office. Cash was literally god which implied being extremely careful, calculative and diligent in taking decisions," says Shoor. "No matter what, the bottom-line was to be cash positive and have enough cash for contingencies," he added. Just a two people team till 2005, Kayako graduated to an office in Jalandhar and expanded to 10 people only when its business gained traction - from almost zero to 40 orders a week and 1,000 clients.

Shoor points out that Kayako's growth could have been more aggressive midway if the company had pumped in a few million dollars from venture capitalists (VCs). The example of his competitors help to drive home the point. For example, Chennai-based Freshdesk Techno- logies, founded in 2010, has 210 employees, more than 21,000 customers and has raised $13 million from Accel and Tiger Global Management. However, for Kayako, which is only now planning to raise capital by the year-end, it was a conscious decision to stay frugal until it had solid fundamentals - a strong, market-proven product and senior management in place to grow the business. "Now we know how to use the money better, deliver better to the board and command a much higher valuation," says Shoor, who plans to reach annual revenues of $100 million in five years.

Indeed, there are a small and growing number of entrepreneurs who have preferred to tread their own path by bootstrapping their ventures. In other words, self funding a start-up or running it on operating revenues rather than getting in investors and following their vision. Consider the example of Bangalore-based Greytip Software. It was launched in November 1994 by two batchmates at Sri Jayachamarajendra College Of Engineering, Mysore - Girish Rowjee and Ahmed Sayeed Anjum. The software company had approached VCs in the past but its focus on the domestic market turned investors away. "VCs always thought an India-only model would not work. That had not been proven," says Rowjee. "For them generating 10x returns (10 times the investment) in five years was priority, it was not the same for us. The meeting of minds just didn't work out." The company still managed to survive and grow, changing business models in the process.

Greytip began by selling HR and payroll management software to large companies in India. Brooke Bond Lipton India, later acquired by Unilever, was its first customer in January 1995. Greytip was processing upwards of 250,000 pay slips until 2007 when it realised it was becoming tough to scale up the business at a one-time purchase price in the range of Rs 75,000 to a lakh. The company had to think creatively to survive. It had to inherently answer two critical questions - how to sell software at a much more affordable price and how to reach out to small businesses, the target customers for low-cost software.

The company channeled over Rs 40 lakh, generated from large clients, into new product development and developed HR software as an Application Service Provider (ASP) model (now the technology has evolved to a cloud-based software application) which could be charged at Rs 20 per employee per month. "It could be as much as buying tea for a worker," says Rowjee. Greytip's closest competitors were offering software at Rs 50 per employee per month.

Keeping prices low and still remaining competitive meant reducing costs as well. The company reduced the cost of sales by developing a product that met the needs of most customers without many iterations. "We also cut down the on-boarding time for the customer (time between selling to the customer and getting him to pay) and made sure we collect most of the money we were billing on time," says Rowjee. Initially, the adoption of the software in the small and medium enterprises (SME) market was very slow but picked up in 2011 when cloud-based solutions became much more popular. "While in four years until 2011 we had 300 paying customers, in 2012 we notched up 600 and in 2013 it was 1,150 customers," says Rowjee. Greytip had revenues of Rs 10 crore in 2013/14 and is targeting about Rs 40 crore in 2015/16. Significantly, even now more than 90 per cent of its customers are Indian SMEs.

Most bootstrapped start-ups have realised the need to get their focus right. For Shashank ND, Founder of clinic management software company Practo in 2008 while still in college, the right work culture, maintaining a sharp focus on core competency and using cash efficiently, helped in doing first things first - proving the product and building a strong team. "One essential thing in bootstrapping is to have founders put some skin in the game (put in seed capital). That makes them serious," says Shashank. "So, we had everyone pooling in some money. Second, we set only two deliverables for everyone - either you were selling or writing software codes. This ensured that we were close to the core aspects of the business." The small team of eight people even avoided networking events, to stay on the job.

Practo remained a self funded venture for Shashank for a couple of years. In that period his venture got a hundred paying customers on board and put a strong team in place. This helped in persuading VCs to put funds into his start-up. "It was initially very difficult to convince VCs but they noticed how efficiently we used our own capital and that clicked for us," says Shashank, who has raised $4 million from Sequoia Capital in small tranches since 2010. "They thought that these guys can run much longer with a little more money," adds Shashank.

Evolving with the Market

Indeed, bootstrapping your venture until the market matures and the company finds its feet can sometimes be a wise decision. RapidValue, a mobility solutions start-up, is an example. The company helps customers integrate various functions such as purchase order management, inventory management, sales order management, etc., on the mobile. The Kochi and US-based venture started off in 2009, with three founders - Indian Institute of Management batchmates Rajesh Padinjaremadam, Sirish Kosaraju and Rinish K. Nalini. The three pooled in their savings and took some money from family and friends to set up a small office, a year later. Padinjaremadam, who claims to be growing at 90 per cent year-on-year in revenues over the last few years, thinks raising capital midway could not have helped him grow any faster in an expanding market. "2009 was the time we thought mobile was something that will change the world. It was the same as Internet growth in 1998/99. Also the economic slowdown helped in a way because customers were more risk-taking," says Padinjaremadam. Also, the company kept a close tab on the market - a must for bootstrapped ventures - and focused only on large enterprises and funded startups which have the budget to invest in new solutions. This helped RapidValue track what its target customers want.

RapidValue's clients now includes American for-profit institution of higher learning University of Phoenix, medical device firm Applied Medicals, television broadcasting company Sinclair Broadcast Group and DU telecom in Dubai, besides some Fortune 500 companies. It raised Rs 25 crore from venture firm Helion only in May this year. Staying bootstrapped so far was a conscious decision because now there is much more clarity on how the market is shaping up compared with two years back when the mobile strategy of most companies was still on the drawing board. "Now we see much more planned and budgeted decisions for getting on to mobile," he says. "Raising funds in a nascent market, could have been like kick-starting a rocket ship, which could go in the wrong direction." That could have meant hiring more people in the team which was not required or investing in a technology that was too early for the market.

Whether you are bootstrapped or backed by VCs, the choice is determined by how fast you need to grow. For bootstrapped companies, the key concerns are survival and cash-efficient growth, for venture-backed companies it is market share and how big the company can become. Topline or profitability takes a back seat. "Start-ups have high failure rates and venture-funded start-ups seem to have a higher rate of failure than bootstrapped companies," says Saras Sarasvathy, Professor of Entrepreneurship at University of Virginia's Darden School of Business.

Funding is anyway hard to come by for most entrepreneurs. Consider this. Some 3,500 companies applied for funding to Indian Angel Network, India's largest network of angel investors, in 2013, but only 18 managed to get seed capital. Hence it makes perfect sense for start-ups to learn the basics of bootstrapping to keep the focus right, grow sustainably in the early stages and get much better valuation when they eventually raise capital.

Textile exports buck the trend, grow more than 15% in FY14

How SilverPush is helping advertisers reach out to consumers