Apple has relaunched a 4-inch iPhone in a market flooded with big-screen phones. Will this bring smaller screens back on the shelves?
By Nidhi Singal | Print Edition: May 8, 2016 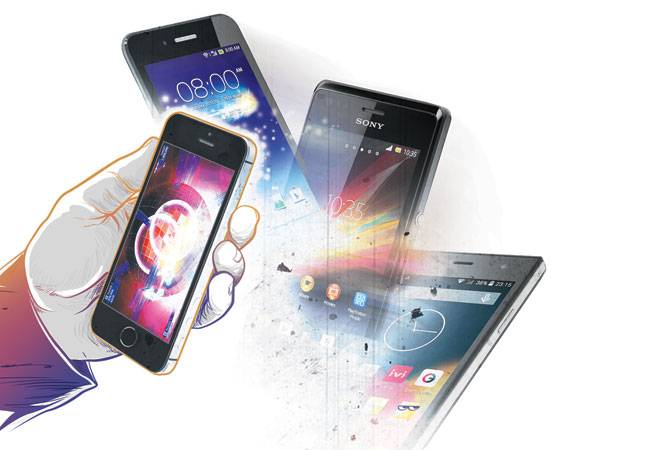 Screen sizes have got bigger year after year. The shift from 3.5 inch to 5.5 inch was gradual and much appreciated, but the succession to 6-inch smartphones did not have too many fans. Apple, too, had joined the bandwagon, ditching its 4-inch size and opting for 4.7 inch and 5.5 inch, with iPhone 6 and iPhone 6 Plus, respectively, in 2014. According to Canalys' worldwide report, in 2015, only 44 per cent of the smartphones shipped had a display measuring less than 5 inches. The segment saw sales falling to 600 million units from 730 million in 2014.

A phone wih a bigger display has its perks when it comes to watching videos, browsing the web or playing games, if you are willing to let go of the ease of single hand operation. For that reason, some don't find it comfortable to use. Today, majority of the smartphones come with a 5-inch-plus display. In fact, the lack of smaller screen phones has contributed towards the growth of bigger displays. The limited options in small-screen phones were the old iPhone or low-cost Androids. Apple has two flagship 4.7-inch devices, but they are still considered big and, above all, expensive - iPhone 6 (16 GB) retails for Rs 36,990, while the iPhone 6s (16 GB) for Rs 44,499. Now Apple is back with the iPhone SE, which is touted as the most powerful 4-inch phone, and is expected to give a new lease of life to smaller-screen phones.

During the keynote launch of the iPhone SE, Apple shared that it had sold over 30 million units of 4-inch phones in 2015. Given that the last 4-inch iPhone (5s) was launched in 2013, 30 million is a huge number. Apple is replacing the iPhone 5s in the international markets with the iPhone SE. This device is as powerful (performance) as its latest flagships - iPhone 6s and iPhone 6s Plus - and is packed in a smaller form factor that looks similar to the iPhone 5s.

"Today, the iPhone SE is the only truly high-end smartphone in the 4-inch category, possibly the only one since the iPhone 5s. That has clearly not helped the segment; so yes, that has been a significant factor in the segment's decline. I think it does serve a certain niche market, albeit a relatively small one. The lower price of the iPhone SE ($400) is far more important," says Danile Matte, Analyst, Canalys.

In India, the iPhone 5s is still a popular choice. Manish Khatri, Partner at Mumbai-based Mahesh Telecom, states, "People have been buying the iPhone 5s for two reasons: the low price (Rs 20, 900 for 16 GB), as compared to the flagship products, and the small 4-inch screen. While the price of the iPhone SE is on the higher side in India, it is likely to sell well once it witnesses a price drop. This will also be an ideal device for those looking for a small yet powerful phone."

iPhone SE
Apple has an aspirational value attached to all its products, irrespective of whether they are new or old. The mid-range iPhone can spoil the market for its competitors who will be forced to launch something that competes with the iPhone SE. Soon after the news of iPhone SE got official, a Xiaomi smartphone with a 4.3-inch display and Snapdragon 820 processor was spotted online. There are reports suggesting that Samsung has its S7 Mini in the pipeline, which will be the company's response to the iPhone SE. Samsung has offered the 'Mini' versions of its flagship smartphones - Galaxy S3 Mini, S4 Mini and S5 Mini - in the past. The S6 Mini was in the works but never got launched. However, an S7 Mini could be on the cards.

Anshul Gupta, Research Director, Gartner, observes that with the launch of the iPhone SE, there won't be any decline in demand for devices boasting bigger screens, but there might be a fall in the growth rate of the bigger screen market. "The overall proposition of the iPhone SE (offering high-end features at $400) is inviting customers to experience the iPhone. These are customers who could not spend on the flagship iPhone and will upgrade to flagship models at some point in time. But, in India, things will be different. There are phones with a 4-inch display under Rs 5,000, which do not have great specifications. The launch of iPhone SE might just give way to smaller screen phones with better set specifications for around $150," he adds.

While the first weekend response to the iPhone SE was lukewarm (some of the international press even termed it 'a flop'), things seem to be turning in its favour. Although Apple has not yet released the sales figures, the iPhone SE was reportedly sold out online as well as in Apple stores in all the countries it was launched in, in the first wave. Although it is not very popular in India due to the price tag of Rs 39,000, a price drop could change the game as it did in the case of the iPhone 6s. And if that happens, this segment is poised for a revival.