With the worst performance among sectors in BT500, most mining and metal companies continue to struggle
By Nevin John | Print Edition: November 20, 2016 On October 6, Naveen Jindal-run Jindal Steel and Power (JSPL) said it had defaulted on payment of interest on non-convertible debentures (NCD) because of a cash flow crunch. It is a complete contrast to the heydays of the steelmaker at the turn of this decade. The share price of the company was at its peak at above Rs 700 and its market value was higher than established biggies such as Tata Steel, SAIL and JSW Steel. The company had a consolidated profit of Rs 3,800 crore on revenue of nearly Rs 13,000 crore in 2010/11.

However, in the past one year, the market value of JSPL has fallen 43 per cent and the share price stood at around Rs 75 at the end of September 2016. In the previous financial year, the steelmaker made a consolidated loss of around Rs 2,000 crore on revenue of around Rs 19,000 crore. The net debt stood at Rs 46,000 crore.

JSPL's fall captures the overall struggles of the steel industry. Like most of the players in the sector, it too has faced challenges in addressing its debt situation in the recent past due to cash flow mismatches. "However, if you look at our record, we were running at peak capacities both in steel and power businesses. The market demand at that time made us increase our capacities by 200-300 per cent, which required huge amounts of debt to finance the mega projects," explains Ravi Uppal, Managing Director and Group CEO, JSPL. "By the time our capacity addition projects were complete and new capacities were ready to be commissioned, there was a drastic change in the demand-supply scenario. This did affect our EBITDA (earnings before interest, tax, depreciation and amortisation), cash flows and our ability to repay debt in the short-term." In addition, the company had been embroiled in the mining scam, adversely affecting the share price.

But Uppal is optimistic that sectors like steel and power are evergreen, and have no substitutes. He is hopeful that the subdued demand will transition favourably for domestic participants, and enable JSPL to generate ample cash flows to repay the debt faster than its tenure. 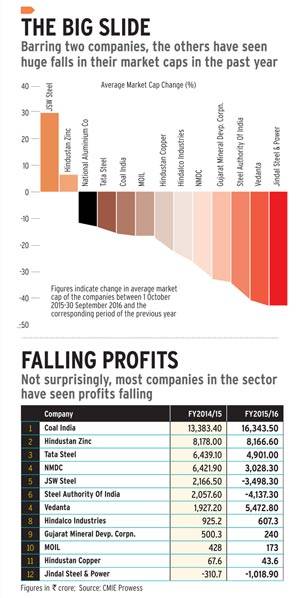 Tom Albanese, CEO of mining giant Vedanta, says that many of the assets of natural resources companies have experienced devaluation owing to the plunge across commodities. "But again, the very nature of the business is cyclical. There are structural issues such as the risk of a rate hike by the US Federal Reserve, overcapacity across commodities, and a slowdown in China's real-estate boom. However, we expect that these headwinds will give way to more sustainable trends across the mining sector," he says.

Vedanta's market value has plunged 40.7 per cent in the past one year. According to Albanese, this period has been remarkable for the metals and mining sector, as the industry recovered gradually from the slump of 2015. Although the metals basket has had a mixed performance over the first half of FY2017, the trend has been one of cautious optimism. Zinc has outperformed other metals owing to the short supply and mine closures. Iron ore, copper and aluminium have experienced a slow recovery over the period owing to the structural shift in the Chinese economy as well as over-capacity. Crude oil remains fundamentally in the $45-50 range. 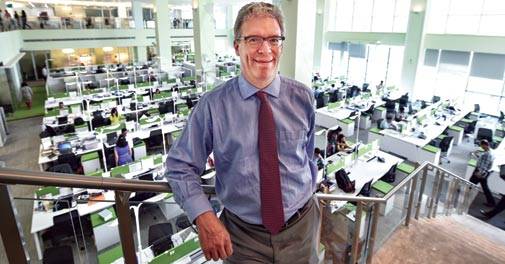 "The very nature of the business is cyclical. There are structural issues, including the risk of a rate hike by the US Fed, overcapacity across commodities, and slowdown in China’s real-estate boom"

In the recent past, several issues cropped up, which resulted in the challenges being faced by the domestic steel industry at present. Some of them occurred over the past one year, and a few are a result of happenings over the past three to four years that have become more visible in recent times. The rampant steel dumping by Chinese and some CIS countries significantly impacted the net sales realisations of Indian industry. The demand forecasts also did not match up to the increased supplies from domestic steel manufacturers and import substitutes. The pressures on EBITDA reflected on the cash flows of the sector, thereby classifying many prized assets of early 2010s as stressed assets over the past couple of years.

Steel sector alone has huge stressed assets of over Rs 50,000 crore. The steel ministry wants "softer" terms for the industry, which is struggling with declining steel prices, globally. Major players, including Bhushan Steel, Uttam Galva, Electrosteel and Monnet Ispat, were among those referred for corporate debt restructuring. Other struggling steel companies with debt were Usha Ispat, Lloyd's Steel and Malvika Steel.

Being a capital-intensive sector, steel plants - like other core sector assets - are built by leveraging debt. Many core sectors like steel faced issues in servicing the periodic interest and amortisation payments due to cash flow mismatches, leading to depreciation in market capitalisations. "The depreciation in market capitalisation is a temporary phenomenon that will reverse as the issues facing the steel sector keep getting addressed," says Uppal.

The moment demand starts picking up and grows faster than the planned capacity additions underway, there will be a reversal in prospects. Increased demand will allow steel manufacturers to sweat their assets to the maximum possible levels, giving them better production economies that will go towards enhancing EBITDA levels. However, according to Uppal, this also needs introduction of some conducive policy measures that in all likelihood are going to be addressed in the New Steel Policy indicated recently by Union Minister for Steel Chaudhary Birender Singh.

What the steel sector needs today is assured raw material availability at affordable rates and rational duties, taxes or royalty structures. This would enable the players to produce at costs comparable with the cost structures of their global counterparts. Also, the sector needs parity between public and private sector participants for a level playing field amongst domestic players.

Interest and finance costs are another major area where the government, steel manufacturers and the banking sector can collectively participate. At present, 30-40 per cent of EBITDA of core infrastructure sector companies is going towards finance costs, thereby exerting tremendous pressure on PBT (profit before tax). During this phase, some initiatives from the government that go towards reducing the interest and finance burden by offering concessional rates through dedicated banks or financial institutions will catalyse growth. In parallel, they also need to find effective solutions to reduce the freight costs and time for domestic logistics.

Albanese says that most of the triggers are macroeconomic in nature and will only subside as the global economy calibrates for higher levels of growth. "It is however, quite necessary for the metals and mining sector to rebalance production based on the demand-supply dynamics. This will stabilise prices in the medium term," he says.

The capital allocation in areas such as technology and innovation to develop low-cost technologies and sustainable trends will go a long way in ensuring sound economic health of the sector. Consolidation and diversification are some of the other methods that can be instrumental in reviving the health of the sector. 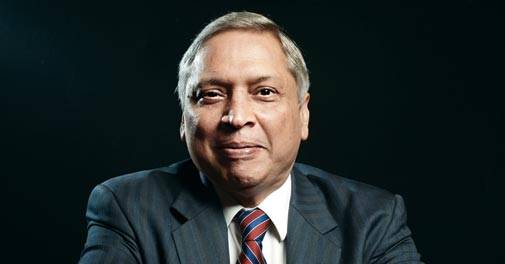 "By the time our capacity addition projects were complete and new capacities were ready to be commissioned, there was a drastic change in the demand-supply scenario"

Uppal says Indian steel players have enough growth potential. India is soon set to emerge as the second largest steel manufacturer in the world. The demand is going to be the main growth driver to sustain the growth targets of 300 million tonne domestic steel production capacity by 2025, he adds.

The various initiatives undertaken by the government are expected to start fuelling the demand for Indian steel soon. The developmental projects in sectors like housing, power, urban transportation projects, roads and highways, ports and infrastructure require humongous quantities of metals.

Massive infrastructure projects undertaken by the state or via PPPs (public-private partnerships) as well as rural electrification are some of the trends that will lead to higher demand for raw materials and minerals. At the same time, reforms in the mining and power sector have raised investor sentiments. Hopefully, better times will come soon for the beleaguered sector.