Indus OS provides the smartphone experience to users in their native language. 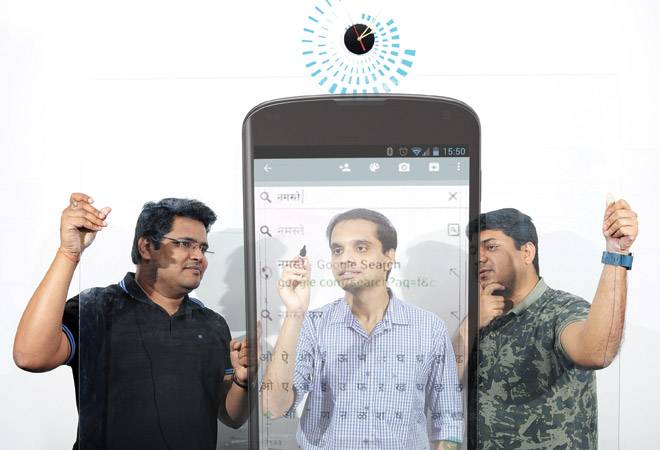 A mobile operating system (OS) supporting vernacular languages - an Indian version in line with Google's Android - was considered unviable until three IITians from Mumbai put their heads together and created an OS in Gujarati three years ago. The trio imported around 5,000 devices from China, loaded the OS and distributed them across 370 stores in the Saurashtra region of Gujarat, in March 2014. The phones, called Firstouch, were priced Rs 400 higher than the then prevailing models that boasted similar features, and yet managed to create a flutter in the market. The handsets went off the shelves in just two months.

While this provided a huge impetus to founders Rakesh Deshmukh, Akash Dongre and Sudhir Bangarambandi, they did not wish to focus on the handset business. The trio stayed invested in the mobile OS space and went on to float another firm Indus OS.

Deshmukh, the CEO of Indus OS, says that in India, less than 10 per cent of the smartphone users understand English, which is the base language in Android and other operating systems. "The remaining customers use the phone for calls and videos, and never use the smart features," he adds. The opportunity for an operating system in regional languages, hence, was enormous.

The pilot version of the OS had 300 applications in regional languages (mostly Gujarati) in the app store. This was increased to 5,000 by March 2015 in the scaled-up version that catered for 10 vernacular languages.

The turning point came when the trio approached Micromax Co-founder Rahul Sharma who agreed to launch one lakh Micromax mobile handsets with Indus OS. The company sold 88,000 phones in 17 days; way ahead of its target of 50,000 handsets in the first month.

Indus OS now supports English and 12 regional languages spoken by over 95 per cent of India's population. After launching its OS on Micromax phones in May 2015, Indus has found a place in 70 smartphone models in India and Bangladesh, including those manufactured by Intex and Karbonn.

"We have over seven million users across India and Bangladesh. And our app store has over 50,000 applications now, most of which are in regional languages," says Akash Dongre, Chief Product Officer.

The company is funded with angel funding and institutional capital. In 2015, Indus OS received over $5 million in Series A funding from Omidyar Network, VenturEast and JSW Ventures.

"It is tough for the common man to understand messages in English from banks and other offices. Our built-in system for translation and transliteration helps non-English speaking users to break the language barrier and communicate with anyone," says Dongre.

India's smartphone penetration is currently just 24 per cent. For manufacturers to leverage the true potential of this market, it is imperative that they provide users the 'smart' experience in their native language. "The next 300 million who will use a smartphone for the first time in the next three years will be native language speakers," Deshmukh adds.

Indus OS also has a regional language app marketplace called App Bazaar, which, unlike other app stores, does not require users to have email addresses or credit cards to download apps. "We work with app developers from different states to get the local flavour," says Bangarambandi, Chief Technology Officer of Indus OS.

Indus OS works on the premise of simplifying smartphone operation with features such as regional hybrid keyboards, word and matra prediction in regional languages, auto correction with over 300,000 words in database, free text messaging between Indus OS users and dialer-integrated pre-paid balance tracking.

It will soon be launching the Aadhaar-authenticated OS in 12 Indian languages. This will use IRIS-biometric technology for secure identification and authentication on smartphones, enabling access to services such as government subsidies, digital payments, Digi-locker, passport verification and e-signatures.

Deshmukh claims that Indus OS is India's second largest OS (after Android) as per the current market share. And App Bazaar has over 15 million downloads.

The company earns revenue through three sources - licensing fee from mobile phone manufacturers like Micromax, Intex and Karbonn (about 35 per cent revenue); monetisation of App Bazaar; and deep integration of paid applications with the OS. The license fee is charged according to the number of devices that use the OS. In contrast, Android charges the OEMs (original equipment manufacturer) on intellectual property (IP).

Promotional campaigns on App Bazaar, under which the paying applications get prominent placements, also bring in considerable revenue. From three advertisers in December 2015 on its app store, the company now has 35, in addition to small advertisers.

Indus OS hopes to connect one billion smartphone users with its digital ecosystem. "The Indian smartphone market is $20 billion in size and neighbouring Bangladesh is $1 billion. We plan to achieve 50 million users in the next two years, taking us a step closer to our short-term target of reaching 100 million by the end of 2020," states Deshmukh.

Towards this, the company will forge partnerships with international smartphone brands. It is already setting up operations in China.

The biggest challenge for the company is to beat the global competition - Google's Android, Apple's iOS and Microsoft's Windows are the leading names in the OS business. Indus OS is now focusing on every aspect of the regional business, and on getting more clients and capital to scale up.

"The Maggi episode was avoidable"