The coming together of arch rivals Subhash Chandra's Zee Entertainment and Rupert Murdoch's STAR India to create a distribution company will have a lasting impact on the TV distribution landscape . The joint venture, called Media Pro Enterprises, will help drive addressability and digitisation, and improve the economics of the TV distribution industry.

Media Pro, a 50:50 JV between STAR DEN Media Services and Zee Turner, will distribute 68 channels, including both firms' flagship Hindi general entertainment channels and their top movie and regional channels. STAR DEN Media Services is an existing 50:50 distribution tie-up between STAR India and DEN Network while Zee Turner is a 74:26 joint venture between Zee Entertainment and Turner International India. 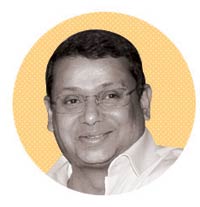 Uday Shankar, CEO, STAR India
"In the past, there was a lack of perspective among broadcasters. The coming together of the two giants will lead to a consensus around a growth blueprint for the electronic media industry," says Uday Shankar , CEO, STAR India. Punit Goenka, MD and CEO, Zee Entertainment adds the deal will also hasten the transition from analogue to digital distribution, which has to be completed by 2014.

Industry observers say what has also brought the two giants together is a bid to stem the increasing piracy in the system. "The motive is to increase declaration by cable operators," says Vivek Couto, Executive Director, Media Partners Asia, a Hong Kong-based media research firm that tracks the Indian media industry.

Many local cable operators, or LCOs, are said to conceal their actual number of subscribers, so as to avoid paying distributors - or multi-system operators, or MSOs, as they are called - their full share of user fees. The TV broadcast space is rife with problems. Broadcasters have been struggling in a bandwidthchoked environment where carriage fees - or the fees they pay MSOs - keep rising. On the other hand, because of under-declaration, subscription revenues from analogue cable have been growing at a snail's pace. In 2010/11, STAR-DEN earned revenues of about Rs 1,000 crore while Zee-Turner clocked around Rs 800 crore.

Click here to Enlarge
Media observers do not see any major revenue increase in the short run, but feel the deal will have deeper impact in about a year and a half. "In terms of carriage revenues, this JV will not have any material impact. Given the reach of STAR and Zee, they have a relatively lower payout of carriage," says Nikhil Vora, Managing Director, IDFC-SSKI Securities.

Some view the JV as consolidation in the broadcast industry that has the power to marginalise the smaller players. "It will increase the cost for the consumer and also lead to cartelisation as these players have the most popular channels. Now they can dictate terms," says Roop Sharma, President of industry body Cable Operators Federation of India. Shankar and Goenka, however, dismiss such fears.

"The industry could gain if there is consolidation across the value chain and consumers are enticed to pay more," says Couto of Media Partners. In United States, Japan, Taiwan and Korea, consolidation in the cable industry has already taken place, with one or two large MSOs controlling each metro.

"We don't see the JV disrupting the trade for other organised MSOs like Hathway. It will improve the profitability of the entire value chain by targeting the LCOs," says Vora. Before Media Pro, there were four major broadcasting bouquets - the other two being Sony One alliance, which distributes 18 channels, and the newly formed Sun18 Media, a JV between Viacom18 and Sun Network, which distributes 33 channels.

So is this alliance open to other broadcasters? Says Goenka: "We welcome anybody who shares our vision." But he adds: "From an equity perspective this is limited to STAR-DEN and Zee Turner. We are not looking at any other equity partners."