Tony Fernandes, CEO of Malaysian budget carrier AirAsia , has changed the face of travel in Southeast Asia with his low-cost business model. Now, the question on every Indian frequent flyer's lips is: will he succeed in doing the same in India? The jury may be out on that, but industry experts say AirAsia will certainly shake up India's aviation market. The Kuala Lumpur-based airline has teamed up with Tata Sons and Telestra Tradeplace to launch a domestic airline in India where less than three per cent of the population flies. It will own 49 percent of the new airline, AirAsia India, while the Tatas will hold 31 percent and Telestra the rest.

The airline plans to launch with three to four Airbus A-320s this year, and scale up thereafter. "I think we can give a fair competition ... I think irrational competition has gone out of the Indian market. Now there are sensible businessmen running their (aviation) business sensibly," Fernandes said during a global teleconference from Malaysia.

India is certainly not an easy market, but AirAsia is no stranger to that. It pulled out of New Delhi and Mumbai last year, citing steep airport charges, though it still flies to five other Indian cities. But the new airline is betting on growing demand from smaller cities in India, which the International Air Transport Assocation forecasts will be the world's second fastest growing domestic air travel market in projections for until 2016. 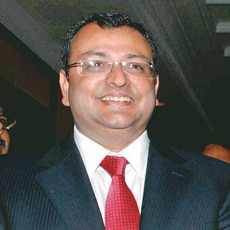 Cyrus Mistry, Chairmain, TaTa Sons
With a huge market waiting to be tapped, the Malaysian airline plans to invest between Rs 160 crore and Rs 320 crore in the project. It has applied for Foreign Investment Promotion Board (FIPB ) approval for the venture. "The new venture by the AirAsia-Tata combine will need to be ruthlessly efficient and innovative, and design a fare structure that will appeal to the middle class," says Capt. G.R. Gopinath, founder of India's first low cost carrier, Air Deccan. "India's passenger market is just inexhaustible."

But it may not be a smooth ride. India's aviation sector has been going through turbulent times because of high operating costs and fierce competition. Domestic passenger traffic fell six per cent in the first nine months of 2012 because of a steep rise in fares, Jet Airways, India's second biggest airline group by market share, said in an analysts' call. Almost all domestic carriers cut airfares last month to increase volumes, and AirAsia's entry is expected to spur more fare cuts.

However, the budget carrier has a big advantage over the others: its cost per passenger kilometre excluding fuel is the lowest in the world at just $2. SpiceJet is close with $2.2. Experts say IndiGo, Jet Airways, SpiceJet, Air India and Go Air are likely to come under pressure and drop fares further once the proposed carrier picks up momentum. Kingfisher Airlines is already on the verge of collapse because of massive losses and debts. "The sector will see a bloodbath before moving towards a phase of consolidation," predicts Amber Dubey, head of aviation at consultancy firm KPMG.

"India, with its low flyerbase, regulatory challenges and high cost structure, cannot afford more than four strong national airlines." AirAsia had been waiting in the wings ever since India opened the airlines sector to investment by foreign carriers about six months ago. But when Fernandes announced the decision to join hands with the Tatas, many in the industry were surprised. The Tatas pioneered civil aviation in India when they set up Tata Airlines in 1932, but the government took over the airline in 1953 and rebranded it Air India.

The group made some attempts at re-entering the market over the years, but its plans failed to take off. Now, it is back in the airline business under the Tata group's new chairman, Cyrus Mistry, albeit as a financial investor. "It (AirAsia) is not riding piggyback on others but stepping into a greenfield venture. The airline business requires deep pockets, and its association with the Tatas will take care of any equity issues," says Mahantesh Sabarad, analyst at Fortune Broking.

JP Morgan analyst Corrine Png says in a note that tying up with the Tatas/Telestra could facilitate access to route rights, accelerate regulatory approvals and provide a better understanding of the Indian market. She adds domestic airlines will be hit by AirAsia, which plans to operate out of Chennai.

"We think this is negative for the Indian carriers, especially SpiceJet given its major presence in Chennai and Tier II/III cities exposure." Some industry experts say AirAsia's entry into India's domestic market is aimed at insulating itself from any downturn in its business from international routes in the country. It is the 12th largest foreign airline in India with a weekly capacity of 18,720 seats to and from the country. "If the FDI had not happened, the airline possibly would have exited India owing to steep costs. Its domestic and international routes will now complement each other," says Sharan Lillaney, analyst at Angel Broking. Globally, the revenues and profits are higher in international aviation. In India, too.Jet Airways, for instance, earned 57 percent of its revenues from international routes in the first nine months of 2012/13. International operations delivered profit margins of 19.7 per cent compared with 14.4 per cent from domestic operations during the same period.

Aviation experts say foreign airlines are unlikely to sit idle while international players such as Etihad Airways and AirAsia sew up partnerships in the country. They might find it easier to enter the country by picking up a stake in existing airlines such as SpiceJet, or even Kingfisher, instead of floating a new airline. "We had estimated that the FDI policy reform would lead to equity deals in two or three existing airlines and one or two fresh startups," says KPMG's Dubey.

The Indian customer certainly is not complaining.

Can Mallya's own wealth help him save Kingfisher?

How accurate are the economic forecasts?