US President Barack Obama
"India will succeed so long as it is not splintered on religious lines. Every person has the right to practise their religion how they choose"

Barack Obama, US President, to Agencies 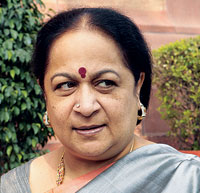 Jayanthi Natarajan, former environment minister
"I received specific requests [which used to be directives for us] from [Congress Vice President] Rahul Gandhi and his office forwarding environmental concerns in some important areas and I took care to honour those requests"

"Display of love in the entire Valentine's week is equivalent to not following Indian traditions. Anyone found displaying love on Facebook, Twitter or WhatsApp will be caught hold of. Eight teams have been formed in Delhi to keep a check on social media" Tim Cook, Apple CEO
"Demand for iPhone was staggering. This volume is hard to comprehend"

"My reputation is being maligned, my record being trashed. Why was this necessary?... Why has it become so low and dirty?"

Sujatha Singh, former foreign secretary, after being removed from the post, to NDTV

US N-deal not enough to meet atomic power plans

Benefits of economic growth are yet to reach the poor