The blurring of lines between banks and non-banking finance companies is setting the stage for a bank-led financial system.
By Anand Adhikari | Print Edition: June 5, 2016 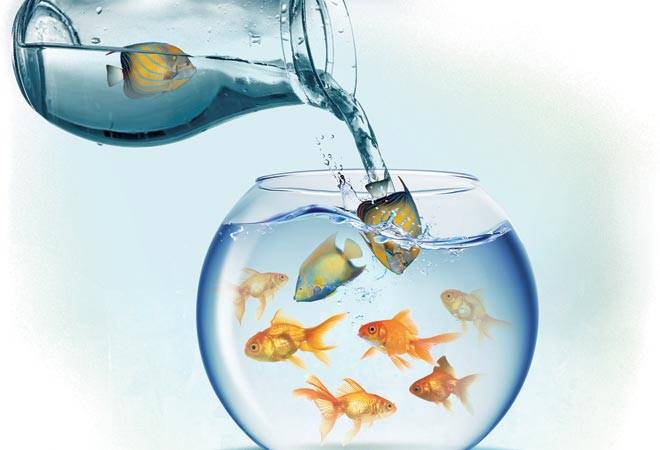 One and a half years ago, the Reserve Bank of India (RBI) jolted the world of non-banking finance companies (NBFCs) by reducing the regulatory arbitrage they enjoyed over banking entities. Then came the differentiated banking licences -- payments banks and small finance banks -- where hundreds of NBFCs lined up to take a banking licence. In fact, out of the 10 successful small finance bank candidates, as many as eight were NBFCs with a microfinance background. Last week, the RBI brought out its 'on tap' draft guidelines for universal banks. Clearly, the RBI is nudging the large NBFCs to convert into banks.

For decades, NBFCs enjoyed a liberal regulatory regime, which also contributed to their growth. Today, they have 15 per cent share of the total assets of the banking system. Over the years, NBFCs have built a well-diversified assets book with presence in home loans, infrastructure financing, vehicle loans, SME loans, investments, etc. Their share, however, hasn't grown beyond 15 per cent because of restrictions on the liabilities side or resources or deposits acceptance. Banks have the advantage of mobilising low-cost deposits like current and savings accounts, whereas NBFCs end up borrowing from the banking sector and also through bonds and debentures.

The RBI has now set in motion the process of ending the regulatory arbitrage between banks and NBFCs. This will result in blurring of lines in terms of regulatory framework, which was a big incentive for NBFCs. For example, NBFCs have to shift to NPA (non-performing assets) recognition norms of 90 days as applicable to banks, compared to 180-360 days earlier. Similarly, there is also a cap on borrowing from banks, which has been limited to 1.5 times of net-owned funds, from earlier four times. "These changes are already forcing NBFCs to rethink their business model," says a market participant. Vimal Bhandari, MD & CEO at IndoStar Capital, an NBFC promoted by global financial institutions and private equity players, says there will be cohabitation of all players. "But definitely, if one attains size, the natural gravitational pull is to become a universal bank," says Bhandari.

Many NBFCs have already attained a large size, bigger than mid-sized banks. NBFCs from big corporate houses like Tatas, Reliance, Aditya Birla Group, Bajaj or ones promoted by Edelweiss, Motilal, India Infoline, and Shriram have built up huge asset books over the years. In fact, the discomfort of the RBI with NBFCs is their growing size and the linkages with the banking system as they borrow from banks for their funding needs. So indirectly, the banks money finds its way in lending to retail and SME finances.

R. Gandhi, Deputy Governor at RBI, recently cautioned about the possible asset-liability mismatches of NBFCs resulting in liquidity risks. "These risks can quickly escalate as solvency risk and lead to systemic risk as well," warned Gandhi in a seminar in December last year. Many cite IDFC's example, which grew its size with a focus on one sector -- infrastructure. But later, funding constraints and product concentration forced the institution to apply for a banking licence.

The shadow banking, which is what the business of non-bank players is often called, is worrying global regulators. The G-20 countries have already created a Financial Stability Board to put in place strong policies in order to avoid a Lehman kind of crisis that rocked the financial system post 2008. That's where many experts see the series of initiatives from RBI - from a differentiated banking regime to on-tap licensing - as creating a more bank-led financial system that is tightly regulated. V. Vaidyanathan, Executive Chairman of Capital First, an NBFC, however, looks at the new institutional framework in a different light. "The entire approach of the RBI is to increase the penetration of financial services in the country," he says.

Some say the on-tap guidelines are not very encouraging for conglomerates to convert their NBFCs into banks. The equity cap restriction of 10 per cent and also the condition of 60 per cent of the group's income coming from financial services are dampeners. Most of the large NBFCs today belong to big corporate houses with a diversified presence in insurance, mutual fund, private equity, capital market, consumer finance, SME, etc. While there are no funding constraints for corporate-backed NBFCs, the hope is someday the securitisation market and the bond market would develop, which would address the issue of capital. There are some who give the example of HDFC, an NBFC with no corporate background, surviving and thriving in the market. "There are not enough product gaps to offer an HDFC kind of opportunity (in housing) to NBFC players," says a market participant.

A consultant with the big four says the NBFC model of doing the routine business where hundred other players are present is itself under threat from fintech companies, which are already creating disruption in the market. And there are legacy issues in these decade-old NBFCs to match the steps of fintech companies. For example, Paytm doesn't have a long history in the traditional financial services business, but this newbie has created a flutter in the market. Now with a payments bank licence, there are hopes of Paytm making a big success in the transaction banking space. Similarly, there are many new NBFC players that have created an online platform for sanctioning SME loans. A fortnight ago, the RBI has come out with a draft paper on peer-to-peer (P2P) funding, which has the potential to disrupt the financial services model in the long run. "The efficacy of the traditional banking model will keep undergoing metamorphosis as newer ways of credit delivery and financial sector savings and investments come into play," believes Bhandari.

Clearly, there is big competition coming in for traditional NBFCs. The options are limited -- to convert into a banking platform or match the steps of new fintech companies to innovate and create new categories. Whatever direction the financial services space would take in future, there is money flowing into the system. More so at a time when the public sector banks - starved of capital - are mired in their own problems. "It's a blessing in disguise. The on-tap universal banking licences with new differentiated banking models will not only bring competition, but also keep the growth engine growing," says a private banker.

What Was Our FDI Again?