A host of Indian companies, led by technology and FMCG firms, will be among the most-valued globally by 2030, argues Nirmal Jain.

The world has seen rapid global changes in the last 20 years, and it appears that this pace of change will accelerate in the next 20 years. India is much better placed than any other country in the world to harness this opportunity and grow faster economically. Personally, I am sure that in the next 20 years, India's economic growth will outpace China. India has two crucial advantages over most countries: demographics and technology. India's young population, will stand out in an otherwise ageing world. India will have the largest "young workforce" by 2030, which will add significantly to income and savings.

Historically, after Independence, India averaged a meagre GDP growth of 2.5-3 per cent in the first three decades, dubbed as the "Hindu rate of growth", which accelerated to five per cent and now, in the last few years, we have seen an 8-8.5 per cent an average growth of 9-10 per cent in real terms in the next 20 years. Fortunately, technology will help India overcome constraints of poor infrastructure and help it maintain its growth momentum. This, with the likelihood of the rupee appreciating significantly against the dollar, will easily transform India into a $10-trillion economy by 2030, from the current $1.4-trillion economy. India will be the fourthlargest economy in the world As in the last 20 years, there will be several winners and new leaders over the next couple of decades. 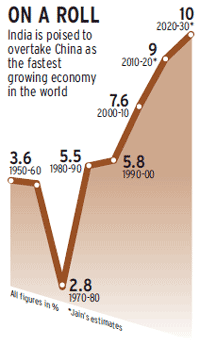 Many are littleknown today or may not even exist today. If you look at the previous 20 years, Google is a brilliant example of a startup becoming one of the largest companies in the world. There will be many more opportunities for the $10 trillon Indian economy. I think market cap growth will be even faster and may reach $20 trillion by 2030. There will be huge technology-led innovation driving consolidation, particularly in the banking and financial sector, which will see significant M&A activities.

Indian IT companies are likely to emerge as global leaders. As technology innovations continue, Indian IT companies will continue to do well with abundant supply of talented manpower required for this industry. With rising prosperity, people will spend more on entertainment, media, travel and leisure and companies in these sectors, too, will grow rapidly. Some of the leading companies today, such as Reliance, are likely to remain in the most-valued companies list, but remember in that period we will see management change to the next generation, and a lot will depend on how they handle the competition from new aggressive entrepreneurs seizing the opportunities offered by a rapidly-changing world.

Some of the sectors which are now not significant will emerge as leading players in the new economy. The one sector which is a dark horse is aviation. Air traffic will increase significantly, aided by big investments in new airports as well as upgradation of existing infrastructure.

Going by what we have seen in the last 20 years in China, the infrastructure sector will continue to grow. While real estate companies have not done well in the last three years, in the next 20 years some of the leaders will emerge from this sector as well. The sectors that I think will struggle are telecom, fertilisers, commodities and maybe automobiles as well. The retail sector will also experience a significant paradigm shift and turbulence. The business models will change with the Internet and e-commerce taking the centre stage in retail.

I am very confident that the next 20 years belong to India on the world stage.
The author is Chairman of the India Infoline group