Much ado about nothing

At 3.20 p.m. on March 1, the window on the National Stock Exchange (NSE) website providing information on bids for the year's largest disinvestment offering conveyed a gloomy picture. With 10 minutes left for the auction's close, a mere one-third of the 427.7 million shares of Oil and Natural Gas Corporation (ONGC) being disinvested by the Centre had received valid bids. The government seemed on the verge of a major embarrassment.

You cannot have disinvestment in the oil sector when it is so regulated and not based on market principles - Shubhada Rao Chief Economist, YES Bank

No further information on the outcome appeared on the website 10 minutes later. But after a few hours during which wild rumours circulated, the NSE and Bombay Stock Exchange declared that 98 per cent of the shares being disinvested had been sold. Late in the afternoon on March 2, the Finance Ministry issued a bland statement saying it had raised Rs 12,767 crore through the disinvestment. The government had saved face, even though the money raised at the end of the exercise covered barely 25 per cent of the oil subsidy in 2011/12. And what was lost was the credibility of state-owned insurer Life Insurance Corporation (LIC), which reportedly ensured the auction was successful.

India's largest financial institution, whose every policy is backed by an explicit and legally binding guarantee of the government, finds its reputation under attack.

Prominent highlights of the Budget 2012 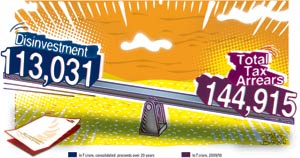 Click here to Enlarge
Is this kind of disinvestment worth it? Twenty years of disinvestment have together yielded Rs 113,031 crore. To put the number in context, cumulative tax arrears in the country at the end of 2009/10 were Rs 144,915 crore. Three individuals, Hassan Ali Khan, Harshad Mehta and Chandrika Tapuriah, alone owe the government a total of Rs 86,831 crore in unpaid taxes, the tax department has claimed. A haphazard approach has meant that disinvestment has been more of hype and less of a reliable and meaningful contributor to state revenue.

"It is an ad hoc approach," says Shubhada Rao, Chief Economist at YES Bank. "The approach needs to get refurbished."

The government decision to make a disinvestment offering, without a proper strategy and at a time when the stock market is volatile, signals weakness in its finances. By the end of January, government data showed it had already overshot its fiscal deficit estimate of 2011/12 by five per cent. The Reserve Bank of India has said the timing of a cut in interest rates would be influenced by the size of the deficit, and a cut in rates - which have been raised 13 times since March 2010 - is essential to boost economic growth.

"Disinvestment makes a difference at the margins," says ING Vysya Bank economist Upasna Bhardwaj. "In the present circumstances, it is critical. If the Rs 40,000-crore target is met, it will provide a good cushion." Divestment receipts fall short
With the government's final expenditure in the current financial year likely to top Rs 13 trillion (one trillion is one lakh crore), disinvestment at best can be a marginal factor. However, even if marginal, it is possible to enhance both size and consistency of flow.

The Thirteenth Finance Commission, in its report two years ago, concluded that the government could raise Rs 3.81 trillion in the five-year period between 2010 and 2015 through disinvestment. A programme of the kind suggested by the Commission would need a long-term strategy backed by the discipline to see it through. "If you are looking at a thrust on fiscal consolidation, it would make sense to have a long-term strategy," says Rao. "It has to be a thought out programme in all its totality."

Ad hoc disinvestment affects valuation and the returns on asset sales for the government. For instance, ONGC is expected to partially subsidise retail consumption of petroleum products such as diesel. However, the extent of ONGC's contribution to the subsidy is uncertain - the government keeps changing the percentage every year - and acts as a drag on valuation.

"You can't have disinvestment in the oil sector when it is so regulated and not based on market principles," says Rao. One way to get around it is to outline a clear path for companies on the disinvestment list and stick to it. Bharadwaj agrees. "What is necessary right now is for the government to clearly define the roles of these companies and start implementing them," he says.

Another way to improve returns from disinvestment is create a little more fiscal room so as to avoid selling shares in a weak market. "The process should not be guided by immediate revenue needs. It should be guided by conditions of the market," says D.K. Srivastava, Director of Madras School of Economics, who was a member of the Twelfth Finance Commission. He feels disinvestment receipts should not all be used for current consumption, but a part set aside for a strategic fund the government can dip into to cushion the economy from downturns. That may be a tall order for a government willing to risk the reputation of its largest financial institution for Rs 12,767 crore.
TweetYoutube

Will UPA push ahead with economic reforms?

AM Naik: The Wall at Larsen & Toubro