The thick haze over Delhi has rekindled the debate over stricter emission standards for the automotive industry. And the Indian government is all set to lead the charge, even pipping the European Union, at least in the two-wheelers category.

India had modelled its emission standards after the Euro I norms in 2000, and since then had been upgrading its emission rules with a lag of four to five years compared to Europe. India currently follows the Bharat Stage (BS) III emission norms for two-wheelers. By April 2017, the entire country will migrate to BS IV standards. However, going by the latest Ministry of Road Transport and Highways notification, India will skip the BS V norms, and twowheelers, both existing and new models, will have to conform to the tougher BS VI standards by 2020. The deadline for compliance of all vehicles to Euro 6 standards by the EU is 2021.

The largest two-wheeler industry in the world with sales of over 16 million units, therefore, will overtake Europe by a year. This, however, has raised concerns for some two-wheeler players. Says Vimal Sumbly, Managing Director, Triumph Motorcycles (India): "As a global policy, we will be conforming to these standards, though it will be a big challenge to have the right blend of technology to conform to the most stringent norms, ever."

Tighter emission norms and alternative technologies will bring India on a par with global standards. India also mandates the use of electronic fuel injection (EFI) systems in two-wheelers. This will have significant cost implications for manufacturers as well as consumers - the cost of upgrading bikes, scooters and mopeds that run on the conventional carburetor system is huge. EFI is a computer-controlled fuel delivery system that uses software to determine the amount of fuel and air to reach a desired blend of emission. There are also fears over the availability of BS VI-compatible fuel. 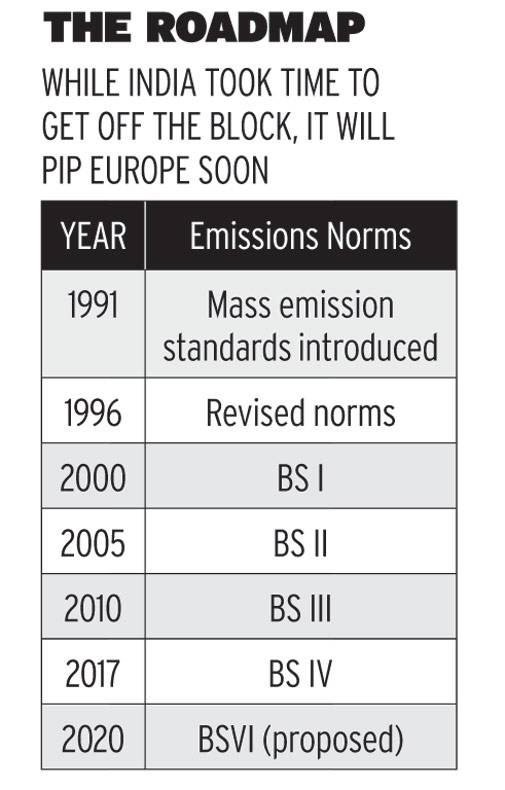 "It is not just about technology, but the entire ecosystem needs to have balanced integration. We will need the fuel much earlier to test the vehicles in Indian conditions and to calibrate them across different climatic conditions across the country," a senior functionary of the Society of Indian Automobile Manufacturers said, adding: "It will be the biggest challenge ever in terms of technological progression for the industry."

Unlike China, cleaner transportation options, including electric vehicles, have failed to make an impact on Indian consumers. Almost 78 per cent of the vehicular traffic comprises two-wheelers and, going by the current catastrophe of emissions of greenhouse gases and particulate matter in major cities, stricter emission norms could make the air breathable before there is a major shift in our mobility habits towards efficient sources of energy.

Will India be Trumped?