India’s and the world’s most talked-about CEOs in the past 30 days. 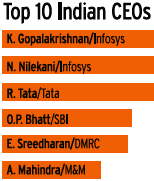 The most written-about Indian CEO in the past 30 days (June 26 to July 23) was Kris Gopalakrishnan of Infosys following co-Chairman Nandan Nilekani’s exit from the board of Infosys. The company’s first-quarter results added to Gopalakrishnan’s visibility. There were also a few articles hinting at challenges ahead for Gopalakrishnan’s leadership.

Most favourably written-about CEO: Nandan Nilekani, outgoing co-Chairman of Infosys, received the most number of positive coverages after being selected to head the Unique Identification Authority of India programme. Infosys CEO Kris Gopalakrishnan remembered him “as a friend and dreamer with the ability to think big and make it happen”.

Power movers
Despite the drying up of jobs, the infrastructure industry in India has seen a number of senior level movements. BT looks at the five such top executives who took up new assignments with salaries in excess of Rs 1 crore in the past few months.

WHO: Ravi Uppal, Head of L&T Power Ltd.
FROM: He was the Global Marketing Head, ABB, till early 2009

WHO: Rohit Modi, Deputy MD, Gammon India
FROM: Modi was President, India, Suzlon Energy, till May 2009

WHO: Maxwell Birley, COO, Jublilant Energy
FROM: Birley was associated with Oil & Gas and based out of Europe till May 2009

WHO: Raj Kumar, MD, GMR Power
FROM: Kumar moved from the Jindal Group where he was CEO of the energy business