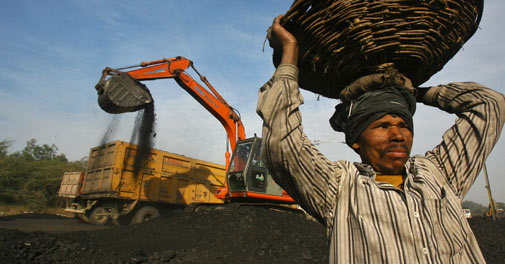 Corporate India has a new bete noire - Director of the Central Bureau of Investigation (CBI) Ranjit Sinha. The country's senior most IPS officer, Sinha has come under fire from corporate houses for an FIR against one of India's well- known industrialists, Kumar Mangalam Birla and his company Hindalco, along with former coal secretary P.C. Parakh, for irregularities in the allocation of a coal block in Orissa. It is alleged that Hindalco was not qualified for the coal block allottment.

Sinha, considered close to the Gandhi family, was made CBI director in November last year. He is personally overseeing the investigations into the Supreme Court monitored probe of the coal scam. According to the Comptroller and Auditor General (CAG), the government's decision not to auction 194 coal blocks between 2004 and 2011 lost the country some Rs 1.86 trillion in revenue. Earlier in June this year, Sinha had also filed an FIR against industrialist and Congress MP Naveen Jindal and former minister of state for coal Dasari Narayana Rao, and subsequently questioned them for their alleged role in the scam.

CBI officials defend their actions and say they are able to proceed freely now, without any political pressure, because of the apex court's intervention. The agency is often seen as a tool in the hands of the ruling United Progressive Alliance. But this time Sinha's team has faced flak even from Congress ministers. Commerce Minister Anand Sharma accused it of needlessly stirring controversy. "CBI must not play to the gallery," he said.

The FIR naming Birla is the 14th in the ongoing investigation. This is not the first time a corporate CEO has been booked, but both corporates and the political class seem wary of the implications of the move. Sharma, for instance, is worried that the case will further erode global investor confidence in the India growth story.

"Any FIR without a particular reason against a respected businessman will invariably create a difficult environment for business," says Adi Godrej, Chairman, Godrej Group and former president of the Confederation of Indian Industry. Doing business in India was never easy, he adds. Firdose Vandrevala, Executive Vice Chairman, Essar Steel, agrees. "Overall sentiment has currently gone into "wait and watch" mode with everything that's happening and elections round the corner. I don't think India has the luxury to wait and watch."

The Congress also has another reason to be apprehensive. Parakh has pointed out that Prime Minister Manmohan Singh himself approved the decision to allocate the coal block to Hindalco. Singh should be "accused No. 1", says Parakh. The prime minister's office in turn has clarified that Singh's approval was given purely on the basis of the coal ministry's recommendation.

India has the world's third largest coal reserves of 286 billion tonnes, but state owned Coal India, which enjoys the monopoly to do so, has not been able to extract enough to meet the country's requirements. This forces India to import coal from Indonesia, Australia and South Africa. Last year, India imported coal worth $16 billion. This year the figure is expected to touch $20 billion.

Analysts say the FIR against Birla and Parakh does not mention any quid pro quo or illicit transaction between the two. If the investigators are unable to establish this, under the relevant sections of Prevention of Corruption Act, the case may not hold, says a former chief secretary. "Then it would be a mere case of negligence of duty at the most," he said. Parakh was praised by the CAG in its report last year, which considered him a whistle-blower in the scam. "I believe Parakh is an upright officer but can't say this with confidence about Birla. Still, I believe that CBI should inquire into this for the common good. If they are clean, they will come out clean," says Prashant Bhushan, Supreme Court lawyer and leader of the newly floated Aam Aadmi Party.

Sinha believes the agency has a strong case. The CBI has alleged in its FIR that the Coal Ministry Screening Committee's recommendation that the block be allocated to public sector units was ignored to "accommodate" aluminium major Hindalco. However, CBI officials maintain they are open to reconsidering their stated position should fresh evidence emerge.

- With inputs from Suprotip Ghosh and Arpita Mukherjee