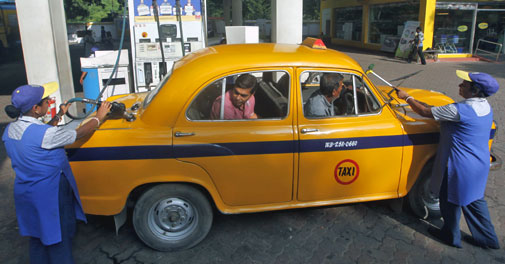 According to the Petroleum Planning and Analysis Cell, the data wing of the Petroleum Ministry, rising diesel prices and shifting of industrial consumers to alternative fuels due to a dual pricing policy, has dampened consumption.

Slowing sales of commercial diesel vehicles and the improved power situation - leading to less diesel use in private generators - have also contributed to the trend, it said. In fiscal year 2013/14, diesel prices - between April and February - rose over 14 per cent to Rs 55.48 a litre in Delhi. "The reasons for the fall [in consumption] could range from price elasticity and grid power stability to the downturn," says Deepak Mahurkar, Director and Leader-Oil and Gas at PwC India.

The government has raised the price of diesel by 50 paise almost every month from January 2013 to wipe out losses on the fuel and eventually make its price market determined. (Petrol prices were decontrolled even earlier.) "In the past, we have seen the gap between diesel and petrol climb to Rs 27 a litre. That's now down to Rs 17.

That's why the demand for diesel cars has also gone down," says Ajay Bansal, General Secretary, Federation of All India Petroleum Traders. Petrol consumption growth, which was just 5.6 per cent in 2011/12 and five per cent in 2012/13, was 9.4 per cent between April and January 2013/14.

The government also introduced a dual pricing system for diesel in January 2013. This requires bulk consumers like the Railways, state transport undertakings and industrial consumers to pay a market-linked price for diesel. For such consumers, the fuel is about Rs 7 costlier than the regulated price at which it is sold at retail outlets. Bulk sales account for around 15 per cent of diesel consumption.

Diesel sales have also been impacted by an overall slowdown in the manufacturing and construction industries, says Bansal. Local consumption of diesel had been growing at six to eight per cent over the past few years due to various factors, including stable pricing. Meanwhile, sluggish demand growth in the domestic market has also triggered an increase in diesel exports. In the April-to-January period, diesel exports volume grew over 17 per cent to 22 million tonnes.

Oil companies still lose over Rs 7 on every litre of diesel sold at the regulated price. More than half the under-recoveries of oil marketing companies are due to losses on diesel.