Richard Fenning, CEO of risk consultancy Control Risks, makes a living by advising companies on risks associated with business in an unfamiliar environment.

Richard Fenning, CEO of risk consultancy Control Risks, has a phlegmatic take on global political developments. A student of history, who makes a living by advising companies on risks associated with business in an unfamiliar environment, he spoke to Sanjiv Shankaran of Business Today during a recent visit to India: Edited excerpts. 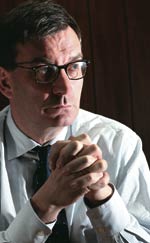 Richard Fenning, CEO of risk consultancy Control Risks
On global risks environment:  If you are looking at the world as whole, over the last 10 years we have had some extraordinarily high profile geopolitical dramas. All of those things are closer to people's perceptions because we are living in a globalized world. Previously, people would have been much less keenly aware of those kinds of risks. I don't think the world is more volatile or risky, it's just the world is more global. If you look at it with some kind of historical perspective, the world is actually more peaceful and prosperous than it has been in the history of mankind.

At a local level, risks come in and out of focus all the time. So if you take a couple of important strands for our clients, the risk of getting caught up in a corruption scandal is much higher than it has ever been because we are living in a world where there is much greater expectation of transparency. That is a risk to business that was absolutely in the background 10 or 15 years ago. For international investors looking to make investments in markets they don't understand very well, the risk of getting inadvertently caught up in local business practices that may be not up to the level they should be, that is a much more acute risk than it has ever been.

On case for risk consultancies: Successful risk management is the cornerstone of building a successful strategy. It is much cheaper to get it right in the first place, and perhaps take a bit more time, than it is to fix problems further down the track.

On Middle East developments: Everybody is coming to rethink their relations in Middle East. US relied for a long time on very stable relationship with Saudi Arabia and Egypt and also special relationship with Israel. United States is having to recalibrate all of that. You have countries like Turkey that is now becoming a regional superpower. It wants to be the country that is implementing change in Syria, wants to have that behind it as a sort of demonstration of its credibility. It's a completely different world. A country like is Qatar is again trying to play a regional role. So, things have changed quite dramatically.

On U.S withdrawing from Middle East: I think those BP projections probably overestimate the extent to which America reduces its dependence on the Middle East. I think it is improbable is going to strategically retreat from the Middle East because it is getting oil from Canada and Mexico. My sense is America is not going to withdraw from the Middle East. What you are experiencing is competition from other global powers, with Russia and China vetoing resolutions against the Assad regime (in Syria).

On risks in India: For a lot of clients it is about navigating the complexity of the Indian market. It is about making sure that whatever arrangement they put in place, whether it is a partnership or a joint venture, they fully understand the reality of the Indian market. What we find with a lot of our clients is that they get BRIC fever. They have boards in Paris or New York saying we have got to invest in China, we have got to invest in India. Therefore, management teams are under a lot of pressure to turn around results quickly in terms of a new investment strategy in these markets because of big concern we are going to miss the bus. The temptation and pressure on business development teams to close deals quickly is stronger than it's ever been. That can force people to rush at the Indian market and not take the time to understand whether it's the regulatory framework, whether it's the background and integrity of people they are looking to do business with, whether it's the nexus of local politics and local business interests in finding out where power really lies in specific parts of the country. All of those good things people should do, because of the feverish state of mind people get themselves into about making investments in a dynamic market, can be pushed aside. There's a lot of internal tension between business development teams and compliance teams within major multinationals as they are looking at these opportunities. That's the space that we operate, trying to help people to execute their plans quickly, but not overlook the sensible mitigation that they should be engaged in.

On China vs. India risks: China shares with India this complex interplay of business interests and political interest. It (India) shares with China the distinction between political power that is exercised in New Delhi or Beijing and local power. There are sort of broad similarities. Everybody is obsessed by these billion person market that they can't get their head around the fact that billion people are not going to buy their product on day one; it's going to take a lot longer. India is a much more liberal place to do business and people find still with the Chinese market it can be a hostile and aggressive place to do business if things start to go wrong for you. India for all its complexity and the fact tax authorities can appear to be capricious, there is openness about doing business in India that you still don't have in China. China wins in terms of infrastructure, but again most people factor that at the outset.

Tatra deals: Who said what