The number of tax disputes corporate India is involved in shows a sharp rise. Will the government be able to fix the problem? 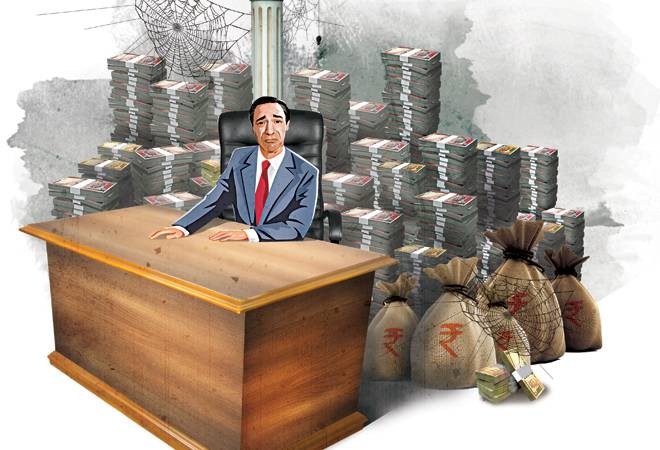 India has seen a significant number of tax disputes between the government and the corporate sector in the recent past, many of which have made headlines. According to numbers from the Centre for Monitoring Indian Economy (CMIE), the total amount locked in tax disputes related to listed Indian companies was Rs 2,18,897 crore in the last financial year.

This amount is startling if we compare it with the gross tax revenues of around Rs 4,90,618 crore during April-September 2014/15, accounting for 36 per cent of Budget estimates for the entire year. The aggregate number, taken out after looking at data of more than 2,000 listed companies, was 27.1 per cent higher than the 2013/14 figure, the sharpest rise since 2007.

The overall magnitude of tax disputes in the Indian corporate sector is even higher. Arrears for customs and service tax were Rs 21,021 crore and Rs 83,112 crore, respectively, as on March 2015. Around 37,506 tax disputes were pending before income tax appellate tribunals with a financial implication of Rs 1,45,534.7 crore. The amounts locked in tax disputes before high courts and the Supreme Court were Rs 37,683.98 crore and Rs 4,654.5 crore, respectively. Around 3,296 corporate cases involved outstanding income tax of more than Rs 10 crore. 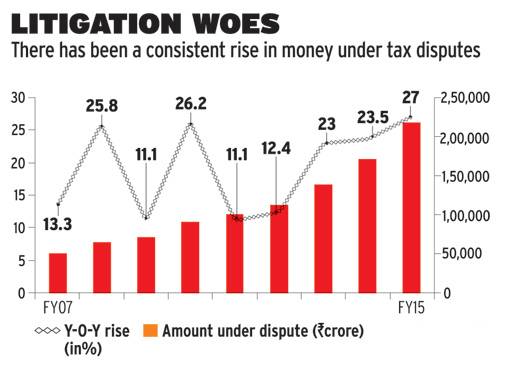 One of the big reasons for the continuation of a number of these disputes is ambiguity in tax laws. "The chronic problem lies in the increasing pendency of disputes and lack of clarity in law," says Jiger Saiya, Tax Partner, BDO India.

The rise in tax disputes is disturbing in light of the fact that it takes several years before a tax matter is resolved in the country. "In India, the success rate of the tax department is 10-15 per cent, whereas in jurisdictions like the UK, the figure is around 86 per cent," says Suresh Surana, Founder, RSM Astute Consulting.

The disputes pertain to assessed tax liabilities for which the company has filed an appeal. They include income tax, excise, customs and sales tax cases. All companies are required to disclose the disputed tax liability as a contingent liability in their annual reports, according to Schedule III to the Companies Act, 2013.

A majority of these disputes relate to income tax (over 40 per cent), followed by sales tax (around 20 per cent). A significant portion, more than 45 per cent, was accounted for by public sector undertakings (PSUs); here, sales tax was the major cause of disputes. The state-owned petroleum giant Oil and Natural Gas Corporation leads with over Rs 10,000 crore under tax disputes, followed by another PSU, GAIL India, which reported Rs 4,753.5 crore under disputes related to customs duty, excise duty and sales tax. The next in line were private sector companies and multinationals, which accounted for 37 per cent and 15 per cent, respectively, of the total money under dispute. For private companies, income tax accounted for a majority of disputes.

These disputed taxes are not debited from the company's account. "However, if the liability materialises, it can significantly impact the company's health," says Saiya.

Given the several layers of complexity, there is no quick-fix solution to the problem. Surana says the implementation of voluntary tax litigation settlement scheme with a proper framework and guidelines can ensure speedy disposal of these cases. The finance minister, on his part, has also been pitching for a friendlier tax regime. Here's hoping that a suitable structure is soon evolved to address these disputes.

Paris Heats Up in Final Week

CAG report points to the need for transparency in fund utilisation