It is a case that will make business houses far more vigilant about intellectual property rights issues: one man, armed with a patent of a supposed new technology, is preventing large consumer electronic firms from importing dual-SIM technology mobile phones into India. 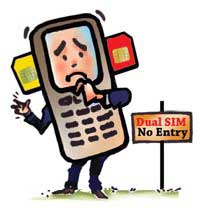 It is a case that will make business houses far more vigilant about intellectual property rights issues: one man, armed with a patent of a supposed new technology, is preventing large consumer electronic firms from importing dual-SIM technology mobile phones into India.

The Patent Saga: It started with S. Ramkumar, a Madurai-based electronics engineer, being granted a patent in 2008 by the Chennai patent office for a technology similar to what some firms were trying to import into India. In March 2009, Samsung India filed a writ petition in Delhi High Court challenging action taken by the Indian customs to prevent its import of dual-SIM as this allegedly infringed the local patent.

Ramkumar, separately, moved the Madras High Court which restrained Samsung and others from manufacturing or selling dual-SIM phones in India. Finally, in July the Intellectual Property Appellate Board (IPAB) suspended the operation of Ramkumar’s patent based on an application filed by NOIDA-based Spice Mobiles, making it possible for companies, for the time being, to make and sell dual-SIM phones.

Issue of Rights: So, was the IPAB right in suspending the patent and the customs department, in confiscating the phones? Shamnad Basheer, IP law professor, National University of Juridical Sciences, notes on his blog (www.spicyipindia.com) that India should roll back regulations that vest undue powers in the hands of customs authorities. He also says: “I’m not entirely sure whether a normal court of law can stay the operation of a patent.”

The Upshot: The key lesson from this? Businesses and individuals, who have an idea to protect, need to do their homework. As Basheer says: “Ramkumar’s patent does not cover all dual-SIM phones but only phones that have more than one headphone/earphone jack.” In other words, the patentee could be claiming rights over technology that already exists and outside the scope of his patent.

Jargon Buster: Paradigm Shift
What the dictionary says: The Oxford Business Dictionary lists it as a “dramatic change in methodology or practice”. In his book, Mind the Gaffe, Larry Trask advises readers to be cautious when using the phrase since it is overused to the point of becoming meaningless.

How it’s used: This is what Arthur Mutambara, Deputy PM of Zimbabwe, was quoted as saying in Zimbabwe Times, while addressing the nation on how to rescue the country’s economy: “We want a paradigm shift from aid to investment to heal the nation from the top to the village level.”

What to say instead: He could have simply said: “we need to attract investments instead of only aid.” But perhaps that wouldn’t have impressed his people as much, or sounded as pedantic.