At the recently concluded Auto Expo in Delhi, Chinese components makers were out in force with a 100-plus exhibitors taking up 5,000 square metres of display space. 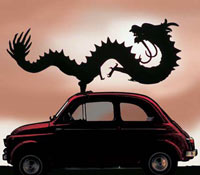 At the recently concluded Auto Expo in Delhi, Chinese components makers were out in force with a 100-plus exhibitors taking up 5,000 square metres of display space. From truck engine manufacturer FAW Group to small- and medium-sized players, like gear-box maker Weichai Power, all had queued up. It signals the growing importance of the Indian market for the Chinese components industry. In 2008-09 alone, imports from China stacked up to Rs 2,000 crore. We try to understand the implications of this incipient trend.

Why India?
India is fast becoming an attractive destination for Chinese vendors as the domestic auto industry has recovered swiftly from the aftermath of the economic downturn.

Who's buying?
Several large companies such as Tata Motors, Ashok Leyland, Bajaj Auto and TVS Motors are among those buying from the Chinese. And their ranks seem sure to swell. Some Indian automakers have even set up procurement offices in China to pare costs.

What's the benefit?
The landed price of Chinese components is on an average 35 per cent lower than components sourced locally. On quality, too, the Chinese seem to be meeting the standards of the Indian auto industry.

What's the impact on domestic components industry?
Already, Indian components makers are worried that the Chinese will hurt their business and are seeking more protection. They feel the 10 per cent import duty is too low. Says Vishnu Mathur, Secretary-General, Automotive Components Manufacturers Association (ACMA): "We can ask the commerce ministry to help out whenever there is clear proof of dumping, but with Chinese components makers receiving a lot of indirect aid and working in a non-transparent manner, it is very difficult to prove any allegations of dumping."

What's next?
Chinese companies are exploring options to increase their presence in India through alliances with Indian companies and establishing manufacturing bases locally. Look out for more Chinese gear under your car hood.