For the embattled Indian national carrier, Air India, it is another jolt. Official data in the second week of April revealed Dubai's flagship carrier Emirates Airline flew more passengers in and out of India in 2011/12 than Air India and its low-cost subsidiary, Air India Express, together . Emirates flew 4.53 million passengers, against Air India-Express combine's 4.13 million. Curiously, the absolute numbers of passengers to and from India flying Emirates was not the highest in 2011/12. Emirates had bigger volumes the previous year, 2010/11, flying 4.65 million passengers. However, in 2011/12 India's total air traffic shrank. This improved Emirates market share to 13.04 per cent, from 12.26 per cent in 2010/11. 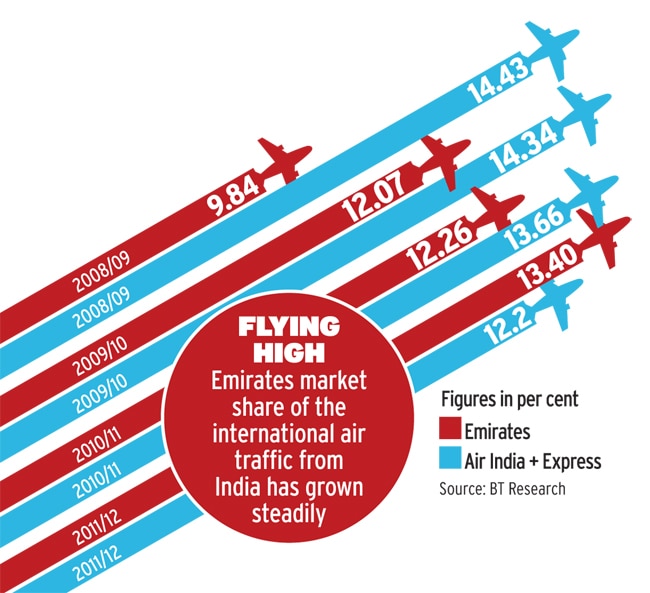 Emirates is the largest foreign airline operating in India with 185 weekly flights to 10 destinations. The present bilateral agreement between India and Dubai allows Emirates to operate 54,200 seats weekly to and from India. It has been lobbying hard with India's civil aviation authorities to increase its weekly entitlement, so it can raise capacity to 80,000 seats. It says it contributed $596 million (Rs 3,280 crore) to the Indian economy since 1985.

A study by think tank National Council of Applied Economic Research (NCAER) says the airline would carry 6.16 million international passengers annually in and out of India, if its weekly capacity increased to 80,000 seats. This would lead to a total economic benefit of $790 million (Rs 4,345 crore) for India. "Often a passenger takes an Emirates flight to actually go to Africa, Europe or the US, as Dubai provides excellent connecting flights," says Sadeesh Raghavan, former managing director of Accenture India.

Some experts claim Emirates has advantages over Air India. "From Dubai, Emirates alone uses all the entitlements under the bilateral agreement, while from India, Air India shares it with three other private carriers," says Mark D. Martin, CEO of the Dubai-based aviation consulting firm, Martin Consulting. IndiGo and SpiceJet introduced services to Dubai in 2011/12, which cut into Air India's share, points out Martin.

Gold's fall has a silver lining for Indian economy

How Golden Quadrilateral is helping the economy grow