The Lockheed SR-71, also known as the Blackbird, was the fastest manned aircraft in the world before it was retired by the US Air Force in 1998.

How things workHypersonic Aircraft
The Lockheed SR-71, also known as the Blackbird, was the fastest manned aircraft in the world before it was retired by the US Air Force in 1998. A reconnaissance aircraft, the Blackbird could fly at Mach 3+, or more than three times the speed of sound, making it a supersonic plane. The high speed allowed the Blackbird to evade a surface-to-air missile attack by simply outracing the missile.

The current record for the fastest plane belongs to NASA's X-43A, a Mach 9.6 aircraft. That is a mind-boggling 7,000 mph, making it a hypersonic flight. Although there is no hard and fast definition of a hypersonic aircraft, there is consensus that it is one capable of travelling at more than five times the speed of sound, or Mach 5.

At present, hypersonic aircraft such as the X-43A are unmanned. Recently, NASA announced that it was working towards a Mach 5 passenger aircraft, which could cut the travel time between New York and Sydney to two-and-a-half hours from the 21 hours it takes now. The Concorde was the fastest passenger aircraft (Mach 2). The SR-71, X-43A and Concorde are air breathing planes. So, how does the X-43A manage such speed? Instead of carrying bulky oxygen to burn up the hydrogen fuel, the aircraft scoops oxygen as it flies.
Just wonderingThe end of a war room?
Maharashtra has yet another Chavan at the helm. As Ashok Chavan put in his papers as the state's Chief Minister in the wake of the Adarsh housing society scandal, Prithviraj Chavan has taken over. Mumbaikars will be keenly watching what the new Chavan has to offer. After all, India's financial capital has been plagued by biblical-scale floods, water shortages, roads that resemble lunar landscapes and other infrastructure woes in the last decade. During his stint, Ashok Chavan had shown some keenness to solve some of these problems and had even set up a "war room", which met on a monthly basis and reviewed progress on the city's infrastructure projects. Chavan himself chaired the war room. A Singapore-based consultancy was also hired to come up with a 40-year concept plan for the city. Mumbaikars will be hoping that changes at the top do not derail some of these vital projects. 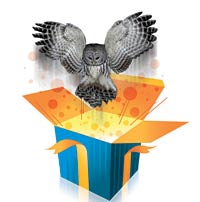 Guess who is endangering birds in India? It is none other than the boy who could not be killed by the one who cannot be named: Master Harry Potter. The Hogwarts alumnus, whose films have grossed over $5.7 billion at the box office, has been accused of endangering the life and liberty of owls by Union environment minister Jairam Ramesh. "Following Harry Potter (film), there seems to be a strange fascination even among the urban middle classes for presenting their children with owls," remarks Ramesh, who has even unveiled a report on how these nocturnal birds are fast disappearing. Potter, though, is not the only nemesis of owls. Tantriks, apparently, are also out to get these big-eyed birds for ritualistic sacrifices.
Snoot CornerCaviar Correctness

If you do not know what caviar is, do not read ahead. Just type caviar on Google and press enter. But if you do know what it is, here is how you eat it. Any caviar snoot worth his weight in sturgeon roe would tell you that the best way to eat caviar is to keep it plain. Do not garnish it. But if you do not like it that way, spread some on a cracker or a toasted slice of bread. Russians swear that caviar works miracles with ice-cold vodka. But then, they are likely to recommend that spirit with curd rice (if they have the latter, that is). Always help yourself with just a spoonful or two of caviar. Anything more is considered rude, especially because it can cost as much as €1,200 a kg at times. Also, never use a stainless steel spoon to scoop it out, but a bone spoon or a wooden one.


Ahead of the pack