Lucky charm: With Mamata Banerjee in power in West Bengal, the world of business expects big changes on the ground there. So is the case with J. Jayalalithaa, the new Chief Minister of Tamil Nadu.

State Bank of India, the country's largest bank, stunned analysts when it announced a 99 per cent plunge in its fourth quarter net profit, which stood at Rs 20.88 crore. It attributed the fall to higher provisions for pensions and gratuity, loan loss and some assets such as teaser loan schemes. Separately, RBI has tightened provisioning requirements for banks by up to 10 per cent for bad loans. Sign of other clean-up acts ahead?

Glenmark Pharma has signed a $613-million deal to outlicense a biological drug molecule to global major Sanofi. GBR500, used to treat chronic autoimmune disorders, is the first biological compound developed and licensed by an Indian company. This is the second such deal Glenmark has signed with Sanofi in a year. The last deal was for $320 million. Outlicensing is good business.

Dominique Strauss-Kahn. The name will ring a bell for a long time to come. Facing charges of sexually assaulting a maid at a Manhattan hotel, Kahn, in custody since May 14, quit his job as Managing Director of the International Monetary Fund. The 62-year-old Strauss-Kahn, popularly known as DSK, is - or was - a leading contender for the French presidency in 2012. A finance minister in the Socialist government, he is widely considered the architect of France's economic recovery in the late 1990s. Strauss-Kahn's troubles brighten the chances of India's Planning Commission Deputy Chairman Montek Singh Ahluwalia landing the top IMF job, though he has denied he is in the running.

Insider trading charges in the world's biggest market are sticking. Raj Rajaratnam, founder of hedge fund Galleon, was found guilty of 14 charges in the largest illegal stock-tipping case in the United States in recent years. Sri Lanka-born Rajaratnam faces up to 20 years in prison and the cloud over those accused of helping him, like Rajat Gupta of McKinsey, has suddenly darkened. Rajaratnam, worth $1.3 billion in 2009, profited from tips on Intel and Goldman Sachs.

Factory output in March rose 7.3 per cent from the previous month's 3.7 per cent, primarily due to recovery in manufacturing and capital goods. Industrial output for 2010/11 ended at 7.8 per cent, down from 10.5 per cent in the previous financial year. Sure, 7.8 per cent is not bad but the dark cloud to the silver-lining is rising interest rates.

RISING IIP
Industrial output in March rose 7.3% against 3.7% in February 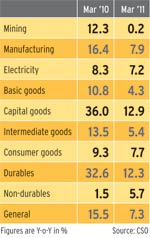 Shrinking coal stocks at power stations, meanwhile, have Anil Sardana, Chairman of the CII's National Committee on Power, worried. The business lobby notes that as of end- February, 32 power stations had coal stock to last them less than seven days, while 18 had just enough coal to keep the fires going for less than four days. The normative stockpile is for about 21 days. Sardana says operations at several thermal power plants have been affected at a time when electricity demand is at its peak.

45,000 The number of personnel planned to be hired by nationalised banks in 2011/12. Branch expansion, business growth and aggressive marketing are the key reasons for the spurt in hiring.

28% Jump in the pay of US CEOs in 2010. This comes after two consecutive years of decline, with bonus payouts expanding the most, according to executive compensation research firm Equilar. Average compensation for S&P CEOs was some $9 million, up from about $7 million in 2009.

0.9% Contraction of Japan's gross domestic product in the January-March quarter. This is second straight quarter of economic contraction. This means the country is in its second recession in less than three years.

MARKETS
Are taxmen hounding former Chairman of Securities and Exchange Board of India, C.B. Bhave? So thought The Economic Times, which reported that he had been asked by the incometax department for details of his tax returns for the years prior to taking up the SEBI assignment. This is perceived as targeting Bhave as his relationship with some officials of the Finance Ministry is said to be rocky. The Finance Ministry was quick to react. Bhave's tax fi le, it said, was randomly picked by a computeraided scrutiny programme with no human involved. And, it was served on him before he retired from SEBI. Well, fi nally a computer that outranks the taxman.

The follow-on public offer of state-run Steel Authority of India Ltd is likely to hit the markets by mid-June. The delay in the share sale had the Union government missing its disinvestment target in 2010/11, but if successful the offer could raise Rs 8,000 crore. About time.

All large mergers & acquisitions will need a go-ahead from the Competition Commission of India, or CCI, from June 1. This is to check monopoly and anti-competition practices. The CCI guidelines, similar to the norms in the United States and Europe, will be triggered if the entities proposed to be merged provide the same or similar set of products or services, and if the combined entity has a market share of over 15 per cent.

Laptop computers using Google's Chrome operating system go on sale in June. The web-centric machines, made by Samsung and Acer, will work off the Internet. Is this the next big thing in cloud computing?