CORPORATE
The ripple effect of the Supreme Court's cancellation of 122 telecom licences is still being felt. UAE telecom operator Etisalat has decided to shut down operations in its Indian joint venture with DB Group. It has also sued DB Group's Shahid Balwa and Vinod Goenka for fraud. Etisalat holds 45 per cent stake in Swan Telecom, which has been renamed as Etisalat DB. Earlier, Bahrain Telecom decided to exit the country by selling its stake in S Tel. On the same spectrum note, Norway's Telenor will sever ties with Indian partner Unitech.

The maker of BlackBerry smartphones, Research In Motion, has finally set up its server in Mumbai. The government has also asked Yahoo and Gmail to route all emails accessed from India through servers in India. 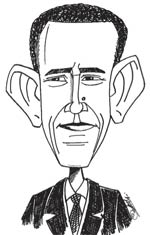 Barack Obama
US President Barack Obama has proposed that firms shipping jobs overseas should be denied tax breaks and tax benefits should go to firms that generate jobs within the United States. According to Obama, this move will not only bring back jobs to America but will also strengthen America's manufacturing activity. The Indian IT sector, which gets 60 per cent of its export revenue from the US, has come out strongly against the US moves to stop outsourcing.

Reliance Brands, a unit of the Mukesh Ambani-led Reliance Industries, has entered into a joint venture with America's Iconix Brand Group to launch 20 fashion and lifestyle brands in the country. The JV group - Imaginative Brand Developer India - will have a vast portfolio of brands in India, including Waverly, Ed Hardy, Peanuts, Mossimo, Cannon and Ocean Pacific.

The Anil Ambani-led Reliance Communications has inked agreements with three Chinese banks for refinancing its debt of around Rs 5,825 crore raised through foreign currency convertible bonds. Fitch Ratings has forecast that at least 20 per cent of the $7-billion FCCBs - mostly from the IT (34 per cent) and pharma (30 per cent) sectors - this year face default risk as investors demand funds, due to languishing stock prices.


ECONOMY
Is the worst over for the Indian economy ? The Prime Minister's Economic Advisory Council, headed by C. Rangarajan, has said the economy could grow at 7.5 to eight per cent in the next financial year. It is banking on moderate inflation and improvement in the investment climate. India's first national measure of retail inflation showed consumer prices rising 7.65 per cent in January from a year ago. The rise in urban areas was higher at 8.25 per cent than in rural areas, where it was 7.38.

West Bengal Chief Minister Mamata Banerjee was at the forefront of CMs who opposed the formation of the National Counter Terrorism Centre, claiming it trampled on the rights of the states. The opposition came at the wrong time for the Centre, which is trying to forge a consensus on policy measures such as opening up the retail sector to foreign supermarkets, pension reforms and compensation for the loss of revenue on account of the reduction of the forthcoming Goods and Services Tax (GST), rate from four to two per cent.

11.9% Projected average salary increment for employees in India this year, as compared to 12.6 per cent hike in 2011. The estimated increment in India is the highest in the Asia Pacific region, followed by China at 9.5 per cent and the Philippines at 6.9 per cent, according to a survey by Aon Hewitt.

19 India's rank among 178 most exposed and least resilient countries to global risks, according to a study by Maplecroft. The other BRIC nations, Russia, China and Brazil have been ranked 30th, 58th and 97th, respectively. The study noted that BRIC nations' strong economic growth in the last four years has not translated into better societal resilience. MARKETS
High prices have hit jewellery demand in the October to December quarter, leading to a significant decline of 44 per cent in gold imports in India. According to the World Gold Council, India imported 157 tonnes of gold against 281 tonnes during the same period a year ago. Total imports last year rose to 969 tonnes from 958 tonnes in 2010, as purchases in the first half offset reduced buying later in the year.

What politicians need to do to be successful