Falling to Coming Up Conquer: Mahendra Singh Dhoni is India's most successful Test cricket captain. His 22nd victory as skipper, achieved in Hyderabad against Australia recently, took him past Sourav Ganguly's 21 victories. If he continues to do well and leads India at the 2019 World Cup, Brand Dhoni will only grow bigger. If Dhoni continues to do well and leads India at the 2019 World Cup, Brand Dhoni will only grow bigger.Photo: Mohammed Aleemuddin

CORPORATE
Tata Motors, India's largest automaker by sales, has cut the prices of all its cars, except the Nano, by Rs 29,000 to Rs 50,000. It has raised the prices of its sports utility vehicles Aria, Safari and Sumo by Rs 7,500 to Rs 11,000. For the record, Finance Minister P. Chidambaram has made it clear that there will be no rollback in the excise duty hike on SUVs, from 27 per cent to 30 per cent. The three per cent duty hike will go a little way in recouping the subsidy on diesel, a fuel used by 98 per cent of SUVs.

Corporate India will dole out an average salary increment of 12 per cent this year. This will be similar to last year's levels, according to HR consulting firm Mercer's Total Remuneration Survey 2013. In February, Aon Hewitt predicted an average salary hike of just 10.3 per cent for its employees.

There could be an interesting outcome to the Budget's proposal to raise the import duty on bikes above 800cc to 75 per cent (from 60 per cent). You may get to ride more locally made Harley-Davidson bikes. Currently, the American motorcycle maker is expanding the range of bikes it assembles in Haryana. Prices have also been reduced on some models to boost sales.

They are among the most coveted jobs this placement season. Around 168 IIM Bangalore students applied to become Reliance Industries chief Mukesh Ambani's executive assistants (EAs). Thirty students were shortlisted and a handful made it to the final round. The selection process was carried out through a video conference. Other head honchos are also reported to be keen on having IIM students as EAs.


ECONOMY
First, global ratings agency Moody's cautioned against a negative credit outlook in the Indian economy. Then, it gave a thumbs up to the Budget, saying it is credit positive for the country. It has cited the revival of investment sentiment and concessions to industry as well as initiatives to revive the infrastructure sector as reasons for the change in stance. 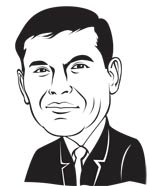 Raghuram Rajan
Chief Economic Advisor Raghuram Rajan does not mince words on the state of the economy. He says the record high current account deficit is increasing the dependence on foreign investments, making India vulnerable to a sudden stop or reversal in fund flows. The current account deficit is expected to be around five per cent in 2012/13.

The Comptroller and Auditor General has now targeted the farm debt waiver scheme of 2008, saying that in several cases ineligible farmers were given benefits while deserving ones were left out. In all, 36 million small and marginal farmers, and six million other farmers were given debt relief worth Rs 52,516 crore.

16.5% Market share of Hewlett-Packard in the Indian PC market in the fourth quarter of 2012. The Palo Alto, California-based IT giant wrested the No.1 slot from Lenovo, the Chinese multinational computer hardware and electronics company, which had a market share of 13.2 per cent. Taiwan's Acer came in third.

$15 billion Estimated value of trade between India and South Africa in 2014. South Africa sees opportunities in India's retail, financial services and infrastructure sectors. A BRICS summit to be held in Durban, South Africa, later this year is aimed at forging closer ties between the fivenation bloc.

MARKETS
Reserve Bank of India Governor D. Subbarao has revealed some criterias for new bank licences. The applicants' innovative financial inclusion plans, for instance, will be looked at closely. The RBI has mandated that new banks should have at least 25 per cent of their branches in rural areas.

Bharti Airtel received a whopping $9.5 billion 'investment interest' from global investors for its $1 billion bond issue. The 10-year unsecured bonds will pay a coupon of 5.125 per cent per annum. The Sunil Mittal-promoted company has now become the largest private sector borrower from the global bond market in 2013, after RIL's $800 million perpetual bond sale in January.

IT firms need to guard against class action suits