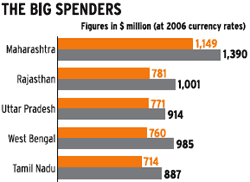 The Indian healthcare industry may grow by 50 per cent between 2006 and 2013. Infrastructure spending on healthcare is expected to touch $4.2 billion by end of this period from the current level of $6.7 billion. However, its geographical spread is still going to be biased, according to a recent KPMG report, Global Infrastructure—Trend Monitor, Indian Healthcare edition 2009-10.

The study notes that while the top five states are expected to account for half of the total investments between 2009 and 2013, the 12 bottom-placed states between them will bring in a mere 4.5 per cent. Even in the top five, there are areas of concern. For example, Uttar Pradesh that is home to 16 per cent of the nation’s population is amongst the lowest spenders in terms of expenditure per person (less than Rs 250 as per 2006 figures).

The report also raises doubts about India’s ability to sustain a high rate of growth. “Radical reforms are needed in the healthcare infrastructure development process, including the introduction of PPP (public-private partnership) models on a large scale,” says Pradip Kanakia, KPMG’s Head of Markets and Healthcare Services.