India is planning to come up with its first commercial-scale tidal power station off the Gujarat coast, according to a recent BBC report.

To understand that, one needs to know how tides work. Tides are formed through a combination of forces exerted by the gravitational pull of the sun, the moon, and the earth's rotation. Electricity can be produced by creating a reservoir or a basin behind a barrage and then passing tidal waters through turbines in the barrage. A major drawback of tidal power stations is that they can generate energy only when the tides are flowing in or out. And tidal plants cannot be built on any coastline. Factors like the height of the tides, the topography of the area are crucial in the success of a tidal power project. In India, some locations like the Gulf of Cambay, Gulf of Kutch and some areas of the Sunderbans are suitable for tidal power plants.

JUST WONDERINGTake-off Delay
Three years after its conceptualisation in 2008, the proposed international airport in Mohali shows no sign of taking off. Not even a date for beginning of construction work has been set. However, politicians, states and government bodies have clashed on a variety of issues, which, in turn, have added to the red tape around the project. The Punjab and Haryana governments publicly bickered on the naming of the airport. Currently, the Airports Authority of India (AAI) and Indian Air Force (IAF) are at loggerheads. The international airport is coming up right next to the existing Chandigarh airport, which is a defence airport. Any construction in the vicinity will require a no-objection certificate from the IAF. According to reports, the IAF is yet to grant that certificate, further delaying work. Given the way things are going, the possibility of any flights taking off from this airport in the near future looks extremely thin. There are no thieves at Shani Shignapur, a small village in central Maharashtra. It is believed that any theft will be punished by the town's presiding deity, Shani, the Hindu god of Saturn. Hence, all houses and commercial establishments of the town leave their doors open and do not use locks, even at night. Naturally, banks were not queuing up to open branches in Shani Shignapur, despite the fact that lakhs of pilgrims visit the Shani temple every month. That is about to change with UCO Bank all set to open a lockless branch - the world's first - here. Naturally, the local constabulary was not jumping with joy at the prospect of an open-door bank branch, but eventually faith and some amount of forceful persuasion from the local politicians helped them tide over the misgivings. Surely, this is one case where faith conquers all. 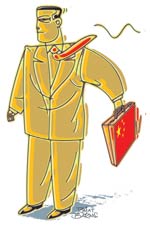 Always be on time. When you address your Chinese host, remember Chinese surnames come first. The guest of honour always sits on the right of the host. Like in the rest of East Asia, accept visiting cards with both hands. Never pocket the cards without reading them. Chit-chat. Nobody signs on the dotted line in the first meeting. Even if you are using a translator, do not talk to the translator. Talk to the host. Finally, say no by beating about the bush. Do not be direct in refusal.


Wanted: A resolve to combat inflation