A few months before the next parliamentary elections, scheduled for May 2014, a majority of Indians will have an additional legal right - they can demand subsidised foodgrain every month. The government has notified the National Food Security Ordinance and over the next six months, states will have to identify beneficiaries and frame guidelines for implementation.

The timing of this Ordinance is important. It is seen as an effort by the United Progressive Alliance (UPA) government to woo voters. Many call it similar to the Rs 52,000-crore loan waiver scheme of the same government in its first term just ahead of the 2009 Lok Sabha elections.

The UPA had promised to implement the Food Security Bill within 100 days of forming a government in 2009, but unproductive Parliament sessions and the government's preoccupation with other issues has delayed implementation. The government will now hope to implement this scheme soon.

"Given that India will hold five state elections in the fourth quarter of 2013 and general elections in 2014, the Congress may want to deliver as soon as possible," Standard Chartered Bank points out in a report.

The scheme offers a uniform monthly entitlement of five kg of subsidised foodgrain for up to 75 per cent of the rural and up to 50 per cent of the urban population. The current entitlement of Antodaya Anna Yojana (AAY) households (the poorest of the poor) will, however, continue at 35 kg of subsidised foodgrain every month. A beneficiary can demand rice at Rs 3 a kg, wheat at Rs 2, and coarse cereals at Re 1. Cereals are already being provided to AAY beneficiaries at these prices. The right, however, cannot be claimed if supply is affected by war or natural calamities.

The prices of the grains have been fixed for a three-year period, after which they may undergo revision. The government may in future look at cash transfers or food coupons to beneficiaries in place of the grain entitlement.

Like all welfare schemes, this one too, will have a financial implication.

According to the government's calculations, the additional annual food subsidy burden - over and above the estimated food subsidy under the existing Public Distribution Scheme and other welfare schemes - will be about Rs 23,800 crore. The Centre's total food subsidy bill will be around Rs 124,747 crore in 2013/14.

An analysis by Standard Chartered Bank says the fiscal impact will not exceed 0.1 to 0.15 per cent of gross domestic product in 2013/14, most of which has been factored into the Budget. However, experts are also looking at other costs related to implementation of the scheme.

Procurement, storage and transport of foodgrain will substantially raise cost of the scheme for the Central government, says Ashok Gulati, Chairman of the Commission for Agricultural Costs and Prices, an advisory body of the Central government on price policy of agricultural commodities. "All of this will need money from the Centre. Once we account for these elements, the actual cost should be much more."

Leakages that are an integral part of the distribution system, add another dimension to the problem. Additional allocation and distribution will mean more leakages and imply more costs. "About 40 per cent of what is allocated does not reach the beneficiaries. We have failed to plug it in 50 years and realistically this can't get fixed in a six-month period," Gulati adds.

Procurement, storage and transport of foodgrain will substantially raise cost of the scheme for the central government

The scheme also faces opposition from some state governments who follow their own subsidised and successful distribution schemes.

Raman Singh, Chief Minister of Chhattisgarh, has opposed the scheme. In fact, Singh's government stole the show last year by passing the Chhattisgarh Food Security Act 2012 before the Centre could deliver on the idea. The Act covers 90 per cent of the state's population and does not limit itself to cereals but also includes salt, black gram and other pulses at subsidised prices.

Other states like Tamil Nadu and Madhya Pradesh also have their own subsidised grain distribution schemes, some of which provide grain at prices even lower than what the new ordinance envisages.

The success and failure of the scheme will depend on the states as they need to implement and monitor it. A state-level Food Commission will be set up for this purpose. States are free to continue or formulate their own food and nutrition-based plans with their resources to provide benefits more attractive than under this Ordinance. 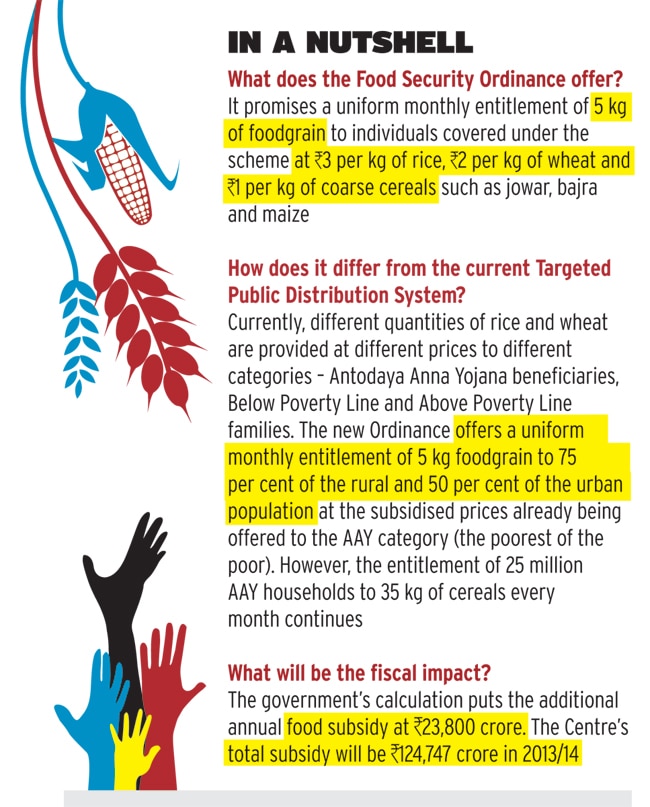 The Ordinance focuses on cereals at a time when both urban and rural India are spending less on cereals and more on non-cereals.

According to the report by Standard Chartered Bank, the scheme could increase demand-side inflationary pressures on noncereal food products such as pulses and dairy items. A consequent supply-demand mismatch may stoke inflation in protein-rich items, too. 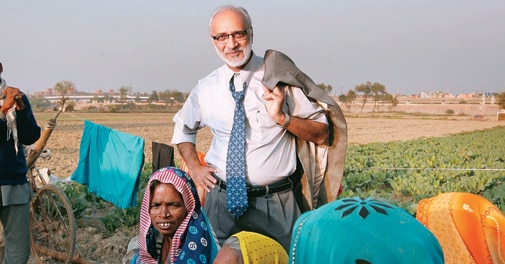 The biggest challenge is to fix leakages in the PDS. What we have failed to achieve in 50 years, can we achieve in the next six months?: Ashok Gulati Photo: Shekhar Ghosh
Why not provide a legal right to these items, too? "There is huge dependence on imports for meeting the domestic demand for pulses and edible oils. Also, the procurement infrastructure for pulses and oilseeds is not strong at this moment. In the absence of assured overall domestic availability of these commodities and weak procurement operations, it is not possible to confer a legal right for their supply," says a statement of the food ministry.

Given inadequate infrastructure, as well as corruption and leakage in the food distribution process, doubts about the quality of delivery to targeted recipients remain high. "The scheme will face serious implementation challenges, and if these are not addressed through a well-thought out mechanism, the objectives may not be met," says T. Nanda Kumar, who has served as secretary in the ministries of food as well as agriculture.

Saroj Poddar has ambitious plans for his Adventz Group