India Inc is sitting on a huge cash pile, though its cash-generating capacity has been falling. Cash is king" is an old saying in the corporate world. A company that just focuses on increasing revenues without enough cash generation can land in trouble. However, India Inc seems to be doing rather well on this front, notwithstanding the huge pressure on bottom lines.

Cash can flow into a company in the form of debt, equity or retained profits. The most desirable is free cash reserves that are accumulated by retaining profits. The BSE 500 companies (excluding banks and financial services companies) were sitting on a cash pile of Rs 16,15,480 crore as on March 2014, 11 per cent more than in the previous year. Though this growth rate was a five-year low, it was not bad if we consider that the top-line growth for the sample was just 8 per cent. The trend continues in 2014/15 as well. If we analyse 247 companies in the BSE 500 Index (excluding banks and financial services companies) which have released their annual reports for 2014/15, free cash reserves grew 12 per cent to Rs 9,58,281 crore year-on-year. This is much higher than the 2.3 per cent rise in top line during the period. 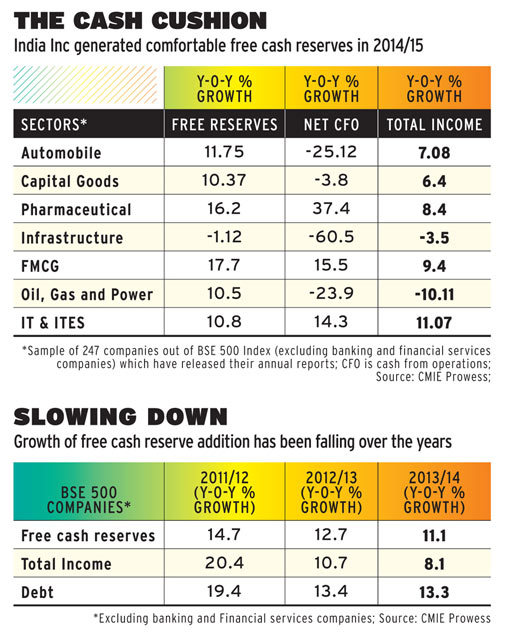 One reason for this cash pile-up is the economic slowdown over the last few years that has made companies go slow on their investment plans. The company with most free cash reserves is Reliance Industries (RIL). It had free cash reserves of Rs 1,63,378 crore as on March 2015, up 13 per cent from March 2014. It added Rs 18,800 crore to its kitty in spite of the 15 per cent plunge in top line in 2014/15. Bharti Airtel is the next in line with free cash reserves of Rs 62,902 crore, 23 per cent more than in March 2014; it grew its top line by 19 per cent. Bharti is followed by Tata Steel with Rs 45,500 crore, Infosys Rs 44,660 crore and Tata Consultancy Services (TCS) with Rs 42,832 crore. Public sector enterprises usually stand out in this aspect. But we could not analyse their numbers as they are yet to release their annual reports for 2014/15.

But one has to be careful while analysing these data. "The aggregate data on cash accumulation can be misleading. The bulk of cash is with the top few companies (with negligible leverage). If we leave them out, the majority of Indian companies are suffering from high leverage. Their cash flow margins are suffering from low EBITDA and high interest expenses," says Deep N. Mukherjee, Senior Director - Corporates, India Ratings & Research.

If we look at the Reserve Bank of India data, the capacity utilisation of Indian companies is just 71 per cent due to muted demand. "The few companies which have adequate cash reserves thus lack any motivation to invest. The remaining set is not generating enough cash to expand."

"In real estate, construction and power sectors, elongation of the working capital cycle has put pressure on operating cash flows. Also, in several cases, companies undertook huge capital expenditure anticipating that the demand growth seen in 2009/10 and 2010/11 would continue. Since the demand has turned for the worse, cash flows from these projects and consequently the ability of companies to service debt has gone down," says Prasad Koparkar, Senior Director, CRISIL Ratings.

Will RBI succeed in its financial inclusion plan?