Virtual network operators will have an uphill task of delivering quality services without losing sight of profits.
By Manu Kaushik | Print Edition: July 3, 2016 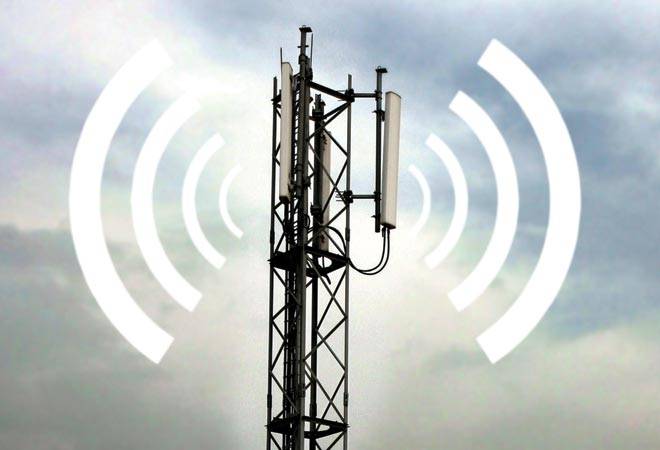 With the telecom regulator issuing guidelines for mobile virtual network operators (MVNOs, or VNOs) earlier this month, India is set to herald an era of no-frills telecom services. Consider them the low-cost airlines of the telecom industry. MVNOs buy airtime in bulk from existing telecom operators and sell branded SIMs to users in niche markets, which could include specific user groups - low-paying users, data-only users, roaming users (for both calls and data), non-roaming users, migrants and youth. In mature markets, they've captured as much as 10 per cent of the subscriber base. In India, Future Group, Datawind and Paytm have expressed interest in MVNO operations.

However, India may have mistimed its MVNO foray. For one, in a market where the primary telecom operators themselves are offering sub-standard voice and data services, MVNOs - who buy connections from networks, such as Airtel, Vodafone, Reliance, Idea, etc. - are unlikely to be able to offer any better services. In fact, they will be in no position to address subscribers' grievances about poor services, since they have no control over the physical infrastructure of the host operator.

Two, while most markets where MVNOs have been successful have four to five operators, at best, in India, most states have up to 12 operators. Besides, since they sell lower-priced voice and data packs, MVNOs will have a tough time creating a market for themselves. The average revenue per user (ARPUs) in India are already among the lowest in the world. Undercutting that will either extend MVNOs' gestation period or leave them deep in the red. As per a McKinsey & Co 2014 report titled Virtually Mobile: What drives MVNO success, "depending on the MVNO operational model and the segment of the target market, investment payback can usually be expected in four to six years".

Also, historically, carriers have refrained from entering into agreements with MVNOs fearing they may lose premium customers to them. In France, for instance, some carriers have resisted renting 3G airwaves to MVNOs. The scenario is changing, though. Telecom players may not give the same attention to their potential customer groups, because these niche markets lie beyond the traditional marketing approaches or are too costly to serve.

MVNOs have had a rough experience in India. In 2008, Virgin Mobile tied up with Tata Teleservices to launch its MVNO service targeted towards the youth. Like Tata Teleservices' core business, the venture did not do well and was merged with Tata DoCoMo last year.

Managing costs seems to be the key. MVNOs have to work on multiple fronts - for instance, decide on which services should be outsourced and which have to be managed in-house. "Winning MVNOs minimise costs by selecting the right mobile virtual network enablers to assist with key operations such as billing and administration," says the McKinsey & Co report.

Almost 80 per cent of MVNOs' costs such as wholesale airtime costs, customer acquisition and marketing expenses are variable. The success of MVNOs like Telmore (Denmark), Simyo (Germany) and TracFone (US) suggests that they can achieve commercial viability by being innovative with the cost structure. For instance, TracFone has kept acquisition costs low by relying on neighbourhood grocery stores. 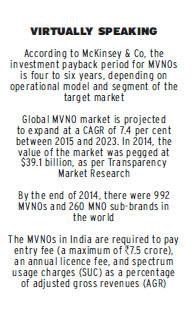 As per GSMA research, MVNOs largely operate in markets where mobile penetration is over 100 per cent because operators are looking at newer ways to attract new customers. India's market penetration stands at around 75 per cent, which is different from the global scenario. But in mature markets like Delhi and Mumbai, it has crossed 100 per cent.

Striking the right partnership with carriers is crucial as MVNOs can ensure that their wholesale airtime rates are low enough to prevent the host network from reducing its own customer-facing prices. On an average, a host network takes away around 30 per cent of MVNOs' revenues for using their network.

Globally, there are over 1,000 MVNOs; the largest multinational players being Lycamobile, Lebara and Virgin Mobile. Walmart, WhatsApp, Xiaomi, Alibaba and Tesco also have MVNO services. As per GSMA Intelligence, around 9 per cent of MVNOs offer data-only services via dongles and Mi-Fis.

The international MVNO market has gone through several phases. The first dates back to the start of the millennium when players offered basic products. The next phase began in mid-2000s, when the voice market got saturated and 3G technology was taking off. By the end of the last decade, most players folded up due to over-segmentation of the markets. Players with a focus on budget prepaid segment and sub-brands of some telcos - Virgin Mobile and Boost Mobile - survived. Since 2012, the market is seeing a sudden rush of players setting up MVNO operations. Why now? Till a few years ago, telecom players adopted prohibitive pricing for MVNOs, making their business models unsustainable. However, they have become flexible of late.

According to Transparency Market Research, the global MVNO market is projected to expand at a CAGR of 7.4 per cent between 2015 and 2023. In 2014, the value of this market was pegged at $39.1 billion. In developed countries, MVNOs typically capture between 10 and 40 per cent of the total market. It takes about $0.7 million to start MVNO operations. Meanwhile, this space is witnessing deals. In April, telecom and mobile payments technology provider XIUS joined hands with UK-based MVNO management consulting firm Hebitel to help companies launch MVNOs in India.

The new norms may have some takers early on and will certainly add depth to the telecom market. However, given the changes in the telecom sector currently, the scenario looks slightly hostile for MVNOs.

No Devil in Devolution