India's gold imports are starting to weigh down the economy. But the buyers have their reasons.
Sanjiv Shankaran | Print Edition: June 9, 2013

The numbers tell a story. India's share of world trade is less than two per cent and makes up less than six per cent of the global economy. Yet it accounts for 25 per cent of the world's gold demand. Indeed, surging gold demand is fast becoming a problem for policy makers as imports of the yellow metal are beginning to weigh down the economy.

This was evident when the current fiscal year's first foreign trade numbers were announced on May 13. April's trade deficit - the excess of merchandise imports over exports - was $17.7 billion, higher by 26.4 per cent over the year-ago period, mainly on account of an increase in gold imports . The data knocked 430.65 points off the Bombay Stock Exchange Sensitive Index (BSE Sensex) - the biggest intraday fall in a year.

India's love affair with gold is not new. However, what has happened over the last few years is that rising gold imports have coincided with a rise in its prices and a weakening of the rupee against the dollar. The combined impact has served to widen the current account deficit (CAD). 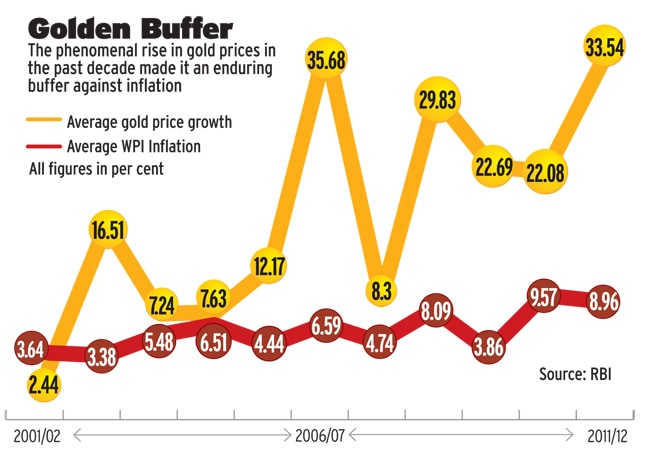 CAD represents the difference between India's imports of goods and services and its exports plus remittances by Indians living abroad. One way of looking at it is that India doesn't earn enough in foreign exchange to pay for imports such as oil and fertilizers. The excess of imports over exports, or the CAD, is usually covered by foreign investors bringing money into India or by dipping into the country's forex reserves.

The Reserve Bank of India (RBI) thinks a CAD of 2.5 per cent of the gross domestic product (GDP) is sustainable. Against this, India's CAD in 2011/12 was 4.2 per cent of GDP and in the last quarter for which data is available, October-December 2012, it was 6.7 per cent of GDP. The greater the gap between the sustainable CAD level and the actual figure, the more vulnerable the economy is to adverse global developments which could suck out foreign investment.

A closer analysis reveals that a few years of high inflation and loose government finances have together created conditions that widened the CAD. Inflation, for instance, made it tougher for exporters to compete and large government subsidies on fuel increased oil imports. Gold purchases, in this context, are a symptom rather than a cause of India's CAD problem. For instance, an RBI group set up to study gold loans traced the root of the problem to inflation. "The group recognises that several studies have empirically validated that gold can be regarded as a long-run inflation hedge," the February report said.

In the last few years, rising gold imports coincided with a rise in the metal's price and a weakening of the rupee, widening the current account deficit.

"We can't ban gold import. We have to compete with it," said the finance ministry's Chief Economic Advisor, Raghuram G. Rajan, on the eve of the recent union budget. He made good his promise - on May 16 the finance ministry said inflation-indexed bonds would be introduced within four months. The ministry hopes this will be the first of some financial products which can compete with gold and lower imports.

Remove the impact of the exchange rate and international price trends, India's annual consumption of oil and gold in volume terms does not seem to be out of sync with the economy's performance. Gold demand between 2000/01 and 2011/12 increased 2.3 times to 1,079 tonnes and crude imports increased 2.3 times as well to 171.7 million tonnes. Over the same period, the economy's size grew 4.13 times to Rs 89.74 trillion. Other than its impact on the CAD, household investment in gold has come at the expense of financial savings. This has hurt companies trying to raise money to expand business. From placing about 55 per cent of their total savings into financial instruments in 1990s, households were willing to direct just 36 per cent of their savings there in 2011/12.

Given that the worsening CAD is the result of inherent weaknesses in the economy, finance ministry officials tend to be unmoved by a few weeks of falling oil or gold prices. It is the quantum of the deficit to be financed that the ministry cares about, says an official. India had to finance a CAD of $78 billion in 2011/12, an exponential jump from $9.5 billion in 2006/07. India's CAD in the near future is likely to be in the $80 billion range, the official adds, making it imperative for the government to constantly woo foreign investors. On May 15, Finance Minister P.Chidambaram left for a five-day tour of Europe and West Asia to meet potential investors, his third such trip this year.

"Capital flows will depend on global events," says Samiran Chakraborty, Managing Director and Head of Research, Standard Chartered Bank, explaining that rather than India's growth rate, foreign portfolio investors are likely to be more influenced by the actions of central banks, such as US Federal Reserve, when they make allocations to India.

How the $45 million ATM heist was carried out