On March 13, all restrictions that the Reserve Bank of India (RBI) had imposed on cash withdrawal after the demonetisation of high-value currency (accounting for 86 per cent cash in circulation four months ago) came to an end. The apex bank and the central government, however, continue to stall all information regarding the decision, its purpose and its real impact. 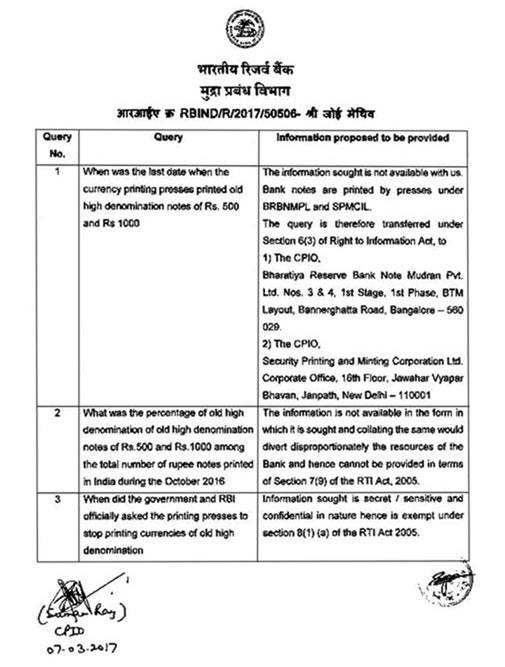 In response to an RTI query by Business Today, the RBI has said that it cannot disclose the date when it had instructed currency printing presses to stop printing the now withdrawn Rs500 and Rs1,000 notes as the information is confidential and sensitive in nature. To a related query meant to understand the quantum of those old high-denomination currencies that were printed just before Prime Minister Narendra Modi announced the demonetisation move on November 8, 2016, the RBI replied that the information was not available in the format in which it was sought. It maintained that to collate the information-what percentage of the old high-denomination currency constituted the total currency that was printed in October 2016-the bank would have to divert its resources disproportionately.

The official stand taken by the government is that the decision was well thought through, and the timing of the announcement was deliberately kept a secret as otherwise it would not have met the objective of curtailing counterfeit currency and black money in circulation. But the government is yet to quantify the outcome of its demonetisation exercise.

Last month, in a written reply to a question in the Rajya Sabha, Arjun Ram Meghwal, Minister of State in the Ministry of Finance, had said that as on December 10, 2016, Rs12.44 lakh crore in Rs500 and Rs1,000 notes had been submitted by banks to the RBI. The minister could not clarify the extent of black money or counterfeit notes that had been wiped out during the exercise. "The data obtained in this regard would need to be reconciled with physical cash balances to eliminate counterfeit notes, accounting errors, possible double counts, etc., after which only the final figure will be arrived at," Meghwal stated.

The government has also informed Parliament that the impact of demonetisation on business and industry, apart from jobs and poverty, can only be known over a period of time.

By March 3, 2017, the RBI had put currency notes worth Rs11.7 lakh crore in circulation. Although it was still short of the Rs6.1 lakh crore currency that was in circulation a year ago, it was good enough for lifting all restrictions on currency withdrawals that were in place since November.

The government has succeeded in normalising the money supply situation. But that cannot justify the demonetisation decision. ~