The CAG report points to the need for transparency in fund utilisation.
By Dipak Mondal | Print Edition: January 31, 2016 The report of the Comptroller and Auditor General (CAG) in late December, raising questions about the utilisation of funds collected by the government under various cesses, has jolted taxpayers. "The problem is lack of transparency," says Pronab Sen, Chairman, National Statistical Commission. "The finance ministry should regularly reveal how much it collects and how much it disburses. But it does not."

The CAG report notes that Rs 64,000 crore was collected as cess on secondary and higher education between 2005/06 and 2014/15. "Neither was a fund designated to deposit the proceeds of the cess nor were schemes identified on which the cess proceeds were to be spent," it says. "Conse- quently, the commitment of furthering secondary and higher education as envisaged in the Finance Act was not transparently ascertainable from the Union account." 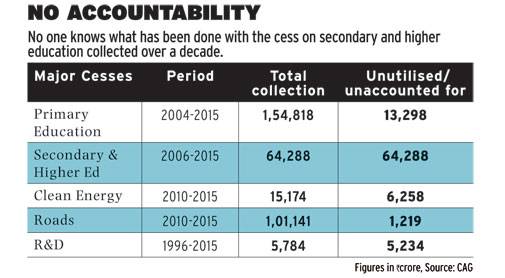 It also points out that only part of the funds obtained through a number of other cesses are accounted for. Of the Rs 5,784 crore collected as cess for research and development since 1996, only Rs 550 crore - or less than 10 per cent - has been utilised. In 2014/15 alone, the government collected Rs 907 crore through this cess, but the only outgo recorded is a transfer of Rs 7 crore to a fund administered by the Technology Development Board. Again, of the primary education cess in force since 2004, which had mopped up Rs 1,54,818 crore, Rs 13,298 crore remains unused or unaccounted for. Of the clean energy cess in force since 2010/11, over 40 per cent - Rs 6,258 crore out of Rs 15,174 crore collected - is unutilised (see No Accountability). There is no separate fund in which cesses are deposited - they go into the Consolidated Fund of India, alongside all revenue and loans obtained by the Central government.

The latest cess, imposed since last November 15, is the Swachh Bharat Cess of 0.5 per cent on all services, to fund the clean-up campaign of Prime Minister Narendra Modi. But there is no clarity on how much has been collected or how it is being spent, if at all. Service tax was raised last year from 12.37 per cent to 14 per cent, while cess was increased to 14.5 per cent.

"It is the government's right to levy cess to raise money for a specific purpose," says K.V. Thomas, Congress MP from Ernakulam, Kerala, and Chairperson of the Public Accounts Committee (PAC). "But government must be more transparent about the way it uses money. The PAC, under its former chairman, Murli Manohar Joshi, had raised this issue on several occasions. We will also look into it when we take stock of the accounts." Have these funds been diverted for other purposes? No one knows.

"If the money collected through a particular cess is not used for the purpose it was intended, it must have been used for something else," says a CAG official involved in the preparation of the December report, who does not want to be named. "There are many departments and ministries which spend more than the money allotted to them. Unused funds could have been diverted." In 2014/15, for example, defence pension cost the government Rs 9,436 crore - more than what had been budgeted for it.

The difference between a cess and general funds sanctioned for different ministries and departments is that the former does not need to be annually passed by Parliament as long as it is used for the purpose it was collected. "There are situations where a government needs an uninterrupted flow of funds, where the commitment is long term, and which thus warrant imposing a cess," says Sen. "Or else, fund utilisation will have to be voted upon every time, which is cumbersome." But he stresses that it is important to earmark the funds properly, which is not being done. "Ideally, cess funds should be escrowed," he adds.

But the government remains reluctant to part with details. There are just two references to cesses, for instance, in the plan outlay for 2015/16. At one point it says: "An estimated receipt of Rs 27,575 crore by way of proceeds from the (Primary) Education Cess will be credited to Prarambhik Shiksha Kosh." The second mention says the government will spend Rs 1,645 crore of the cess on diesel (part of the road cess) on railways.

Tax disputes with India Inc a challenge for govt